•The Service Party leader Mwangi Kiunjuri said he will complete stalled roads, water  and other projects but needs numbers in Parliament to push for allocations.

• Kiunjuri, the former Agriculture CS, on Sunday said he would enter the crowded race and urged his supporters to elect candidates on his party’s ticket. 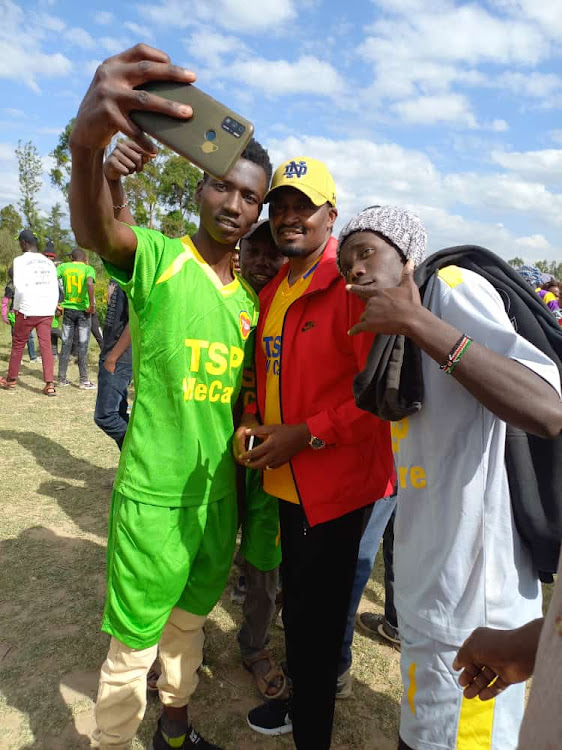 TSP TOURNEY: TSP Leader Mwangi Kiunjuri takes a selfie with footballers at Matanya grounds on Sunday. He announced he is running for the Laikipia East MP set in August
Image: ELIUD WAITHAKA:

The Service Party leader Mwangi Kiunjuri has formally declared he will be running for the Laikipia East parliamentary seat in the general election.

Kiunjuri, the former Agriculture CS, on Sunday said he would be facing a crowded field and urged supporters to elect candidates on his TSP ticket.

The former Laikipia East legislator from 1997 to 2012 promised to complete development projects that he said stalled after he left office.

He complained the 10km road connecting the Mirera-Naromoru-Lamuria road was removed from the national government and reverted to Laikipia county, thereby stalling its completion. The 14km Village 3-Kanyagia road was also not tarmacked.

“When I resume office in August, I will ensure these roads are completed because the county has no capacity to complete them,” Kiunjuri said.

He ran for Laikipia governor in 2013 under the Grand National Union party and lost to Joshua Irungu of TNA.

All are yet to be completed in Laikipia Central.

Kiunjuri urged supporters to elect leaders vying on his TSP party saying he would get more bargaining power in the national government while demanding development projects for his people.

“This is how is the government is working nowadays," he said.

Maendelo Chap Chap leader Alfred Mutua has five MPs in Parliament, Gideon Moi of Kanu has 10, Moses Wetangúla of Ford Kenya has 12, Musalia Mudavadi of ANC has 14 while Kalonzo Musyoka of Wiper has 23.

When national resources are being distributed, these leaders are always consulted. That is where I want to take you," Kiunjuri said.

He said he was confident he will have more than 20 MPs and Senators elected on the TSP ticket nationwide.

He spoke at Matanya grounds in Tigithi ward during the finals of a football tournament sponsored by TSP.

Kiunjuri promised to upgrade all the playing fields in five wards in the constituency. Thirty-five teams participated in the tournament.

He urged elected county leaders to sponsor sports, saying the governor, senator and MPs all take home not less than Sh1m per month in salaris but none bothers to sponsor young men and women.

He did not indicate whether he would side with Raila Odinga's Azimo La Umogo or Deputy President William Ruto's UDA. His supporters  said he would support Ruto.

Ephraim Ngugi, who is aiming  for Laikipia West MP on the TSP ticket, said they would support Ruto.

TSP to name its preferred presidential candidate by end of March

Njagi says they are under pressure from supporters to declare which side of political divide they support.
Counties
4 months ago

Why Kiunjuri is on the warpath with DP Ruto