The government has listened to science on Covid — medics 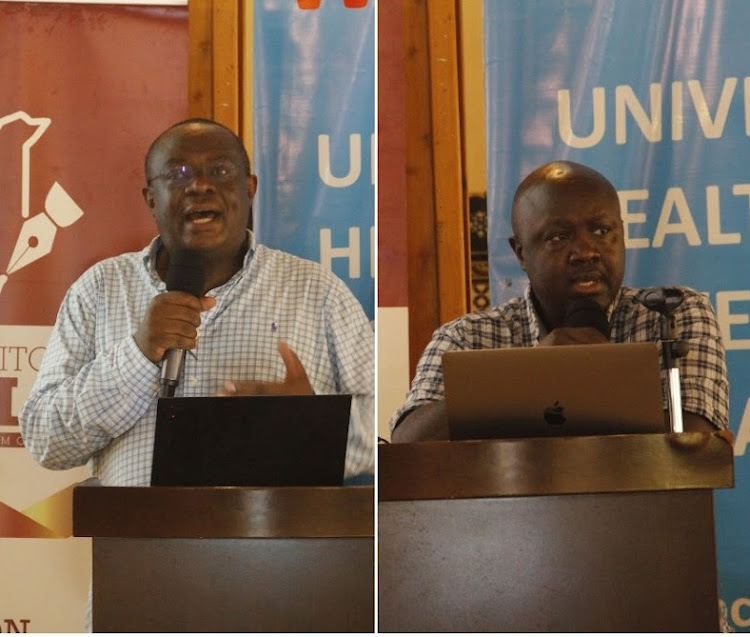 Kenya’s response to the Covid-19 pandemic has been guided by science, which helped avoid overreaction to the Omicron variant.

Infectious disease epidemiologist Prof Thumbi Mwangi said that’s a big thing for Kenya, and it cannot be said of all countries in Africa and in the world.

“Kenya decided that we are not going to close borders. Because there was a reaction by other governments but Kenya listened to science and we knew that was not likely the solution to dealing with Omicron,” he said.

He was speaking in Malindi on Friday during a retreat between Kenya Editors Guild and Ministry of Health officials, led by CS Mutahi Kagwe and CAS Mercy Mwangangi.

Mwangi, who is also the co-director of the Centre for Epidemiological Modelling, said he was proud to hear PS Susan Mochache appreciate that it’s been a team effort. “The doctors, the ICT, data analysts… All hands on deck,” he said.

“Out of our experience analysing data, I’ve seen young people giving their time so that they can have the best estimates we can use to guide our decision-making.”

Dr Willis Akhwale, chairperson of the National Taskforce on Vaccine Deployment, said Covid-19 caught the world off-guard but Kenya has done its best to adapt.

“In the beginning we had a slow initial uptake. And I remember a screaming headline that vaccine campaign has collapsed,” he said.

“No, it had not collapsed. This was because we were putting capacity in place. The quality of vaccine is more important, especially if the vaccine is under emergency use.”

Kenya was also training people to administer the vaccines.

“Our vaccination system was developed in a record three weeks. The moment vaccines landed, we began vaccination the next day.”

From a strategic point of view, he said, herd immunity is achieved through vaccination, not letting the virus spread because that means some people will die, and you cannot choose to let people die.

By the end of 2021, 4.2 million people were fully vaccinated while 5.9 million were partially vaccinated. Following reports of waning immunity from Covid-19 vaccinations, Kenya started administering third doses as booster shots.

Typically, it takes two weeks after vaccination for the body to build protection, Akhwale said.

There was adequate data on the use of Pfizer and Moderna in pregnant women, which is the reason pregnant women are encouraged to take the two, he said.

However, this does not mean they cannot take the other vaccines, such as AstraZeneca, the medic said.

He added that people with blood thinners need to be vaccinated as there is no evidence of them getting blood clots as a result.

John Kiiru, Head of the National Public Health Lab, said Kenya has come a long way in developing its capacity, and the progress will benefit it in the long run, especially in dealing with Antimicrobial Resistance.

AMR occurs when bacteria, viruses, fungi and parasites change over time and no longer respond to medicines making infections harder to treat and increasing the risk of disease spread, severe illness and death.

“Covid will not remain here forever. AMR will remain with us,” Kiiru said.

He said prior to Covid-19, many counties could not do PCR (polymerase chain reaction) testing. It’s a test used to detect genetic material from a specific organism, such as a virus.

“Let alone for Covid, the normal PCR, many could not do it. Now several have the capacity. It shows you Kenya has already prepared even for the next pandemic.”

He said it was important for the Health Lab to receive international accreditation “because wherever you land, our test result is accepted”.

Kiiru said when Kenya resorts to closing borders, the aim is to delay the variant but not to stop it; the best way to stop them is by increasing vaccine uptake.

“We are interested in coming variants than the existing ones. Variants of concerns are important.”

Media engagement, we are not shy. This year we have had three, four interviews. And MoH, they do not tell us what to say, they just say, you can have the interview.

Regarding fake results, he said, “We can’t pretend, it is in existence. These results are from criminals manufacturing certificates, but for now we don’t know them.”

He said invalid results arise in two ways: One, you give the test but it was not properly done, so a positive is a negative and vice versa.

The Health Lab monitors and detects hospitals that give false results. “We give them blind samples, we know the results and ask you test them.”

They qualify or disqualify the hospitals based on the outcome, and even request deregistration in some cases.

“There’s another element whereby it is just criminal behaviour. Remember the result is a PDF. People can modify, if it is a positive, they write negative. Or make up a PDF altogether with the desired result,” he said.

“But the issue of wrong results being generated is a small problem. The CS, the PS, the DG are on top of this.”

On the issue of screening, he said normally, in Kenya, unless we have given an alert that for specific countries, for instance, a new variant has been declared, we normally don’t screen entry passengers.

The ministry has been gathering local data on the need to administer booster jabs
News
5 months ago
Inside the minds of Covid anti-vaxxers
by TOM JALIO Features Editor
News
21 January 2022 - 16:55