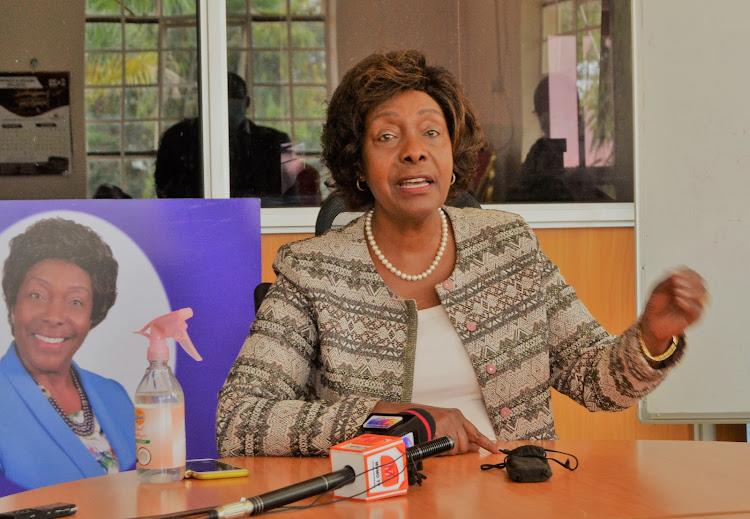 Ngilu lamented that Ruto had increasingly developed the habit of demeaning leaders from areas he has visited during his August presidential polls campaigns.

She also cited the case of Meru Governor Kiraitu Murungi.

Ngilu who had called a press conference in her boardroom on Friday told Ruto to desist from talking ill of leaders whose areas he visited in his campaigns.

“I would like to ask William Samoei Ruto to really desist from the vulgar language that he has been using against leaders,” added Ngilu.

He cautioned that Ukambani leaders will not stomach Ruto’s demeaning language against Kalonzo  Musyoka during future visits.

He said Ruto should evaluate the age difference between him and Kalonzo and accord him respect not only as a leader but as a former vice president.

“The difference between Stephen Kalonzo Musyoka and William Ruto is that one is very honest. Kalonzo is a very honest, reliable and trustworthy person who has worked hard to bring peace to this country. And, therefore, comparing the two is comparing day and night,” said Ngilu.

She said that when he recently visited Meru, Ruto insulted a known serious leader in the person of Kiraitu Murungi, a governor who had participated actively in fight for democracy, constitutional reforms and the freedoms Kenyans were enjoying. He claimed Ruto had done nothing for Kenya and Kenyans.

She also advised Ruto to stop wasting his time campaigning in Ukambani as he would not get any voting bloc support from the region.

Ngilu said as a Raila Odinga’s Azimio la Umoja diehard she was aware that Ukambani was behind Raila who will be the fifth president of Kenya after the August polls.

Ngilu called on the people of Kitui and Ukambani, in general, to take advantage of the current IEBC drive enhance continuous voter registration and enrol as voters in their numbers so as to give their leaders the bargaining power at the high table of national leadership.

She said leaders will only have a say and negotiate for opportunities in the Azimio la Umoja coalition government on the basis of the number of votes they will deliver from their regions.

The governor said she was working on presenting a sizeable basket of votes to Azimio.

27 governors gang up against Ruto, back Raila

The governors have outlined reasons why they will not back a Ruto presidency.
News
3 months ago