There is no compromise on rank or file, says Health PS Susan Mochache

• Health CS, PS herself and a colleague all had to toe the line during international travel 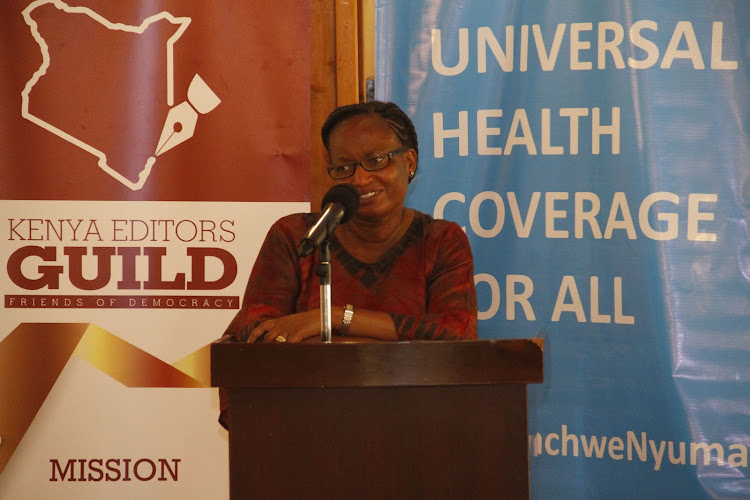 Health PS Susan Mochache says Kenya has become so strict in its Covid controls for air travellers, even Health CS Mutahi Kagwe was not given preferential treatment at JKIA.

She said she is proud of these standards and credited Public Health Director Lt Col Susan Koki, who decided there is no compromise on rank or file as their focus is on securing the country.

“Mutahi Kagwe coming from South Africa had no choice but to sit on a bench at the airport because Omicron had just come in, and we had to test him before he could get into the country. And he sat there like any other citizen to be tested.”

She was speaking in Malindi on Friday during a retreat between Kenya Editors Guild and Ministry of Health officials led by Kagwe and CAS Mercy Mwangangi.

Mochache said the reforms removed corruption, where someone could take you out of the queue, you pay Sh3,000 and you enter.

The PS also gave the example of an officer in her ministry who had gone to the US to visit her parents.

“When they were at the airport in Dallas, not even the bigger airports, they were told Kenya is extremely strict, you cannot enter their territory if you don’t have these travellers’ codes,” Mochache said.

They had to postpone their travel by a day to get everything in order. “And she told me how proud she was that out there, deep in the US, a flight will not allow you on board because you are going to Kenya.”

Mochache herself was in Amsterdam going to the UK at one time, and she was told to show up at the gates at least an hour early to get the clearances of Covid.

“They said you sit there, you fill in and you get that code before you can board the plane. And there I was, trying to get myself roaming, any Internet I could get, till finally I succeeded to get the travel code and they allowed me into that flight,” she said.

“And the same thing they said to my colleague is what they said to me. Kenya is very strict, you cannot enter their territory without these forms. It was a proud moment for me.”

Mochache said there is a need to reform all ports of entry to ensure all borders follow Ministry of Health guidelines.

She said a lot of work goes into preparing the daily statistics for Covid, with some officials working overnight to finish the analysis.

Ministry officials have faced challenges like shortage of testing kits and international sabotage where kits were diverted, but the team has worked tirelessly to ensure not a single day has passed since the virus reached Kenya without them updating the country, she said.

On the procurement scandal at the Kenya Medical Supplies Agency, commonly referred to as the Covid billionaires scandal, she said devolution caused confusion in the health sector.

“To address this we need to redefine the path of the ministry through addressing the institutional structure and identify gaps in the ministry.”

The PS addressed concerns that health is a devolved function but still, the bulk of healthcare funds remain at Afya House.

“This is a myth that needs to be debunked. Money is not consumed at MoH. It primarily goes to state corporations,” she said.

“We don’t have money. In fact, I’m so broke and I can do nothing. The money I receive goes to paying salaries. All what we get are budgets. We pay more than 3,000 workers. The rest goes to national blood transfusion, Kemsa, social insurance, HIV and TV. In the end, nothing is left for us.”

She urged the media to help in advocating for an increase in allocations to the health sector as this would help to remove the gaps in service provision.

“Where else will that money come from? The US is struggling with its own Covid. Economies have shrunk because of this devastating pandemic. Will they open their purses more?” she said.

“No, it is us to open our purses. Which means, we reprioritise our spending.”

On Universal Health Coverage, Mochache said, “UHC is not dead. It has been born. It needs political will. Whoever comes in as the next President must enforce it.”

She said the ministry is getting rid of cartels in blood banks. She urged Kenyans to keep donating their blood.

The January 19-22 meeting comes against the backdrop of governance concerns about the health sector.

All facilities are now working in 98.5% of hospitals, George Ooko said