• The coast will also be sunny but some areas might receive rains this weekend.

• Aura advised the public to invest in water harvesting practices to harness the occasional rainwater. 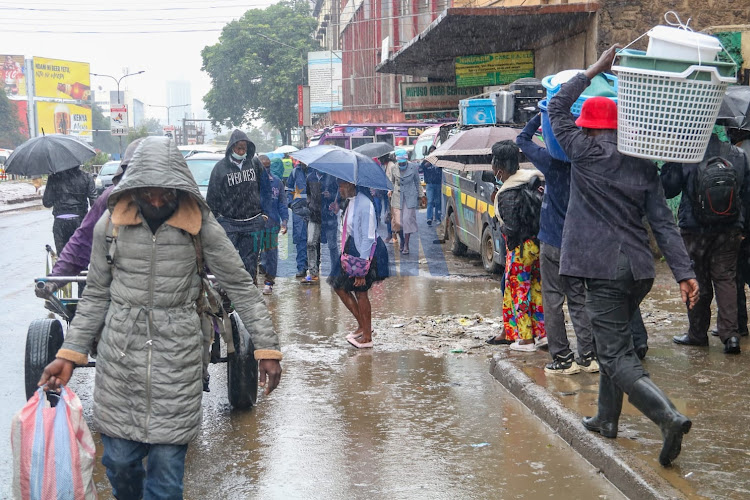 Dry weather is expected to return to most parts of the country this weekend, the meteorological department has said.

This is after a week of floods that killed more than 2,000 sheep and goats in northern Kenya and caused havoc in other areas.

Head of the meteorological department Stella Aura however said some parts of the North Rift and Western Kenya will still receive rains.

“Most parts of the country are likely to be generally sunny and dry," she said in a statement on Friday.

"However, there is a possibility of a few areas in the highlands west of the Rift Valley, South Rift, southeastern lowlands and South Coast receiving occasional rainfall,” she added.

The coast will also be sunny but some areas might receive rains this weekend.

“Strong north-easterly to south-easterly winds with speeds exceeding 25 knots are expected over some parts of the coast, the southeastern lowlands, northeastern and northwestern Kenya,” she said.

In its month-long forecast for January, the met department had said some parts of the country would experience occasional rainfall during the first and second weeks of January.

The department said despite the rains, la niña conditions are still present and this usually results in below-average rainfall over Kenya.

Aura said January being a typically dry month will be suitable for harvesting, drying and storage of grains in the agricultural areas of southeastern and highlands east of the Rift Valley.

She advised the public to invest in water harvesting practices to harness the occasional rainwater.

The rains experienced this week were disastrous in some areas, killing over 1,500 sheep and goats on Monday in Marsabit.

Jonah Mohammed, a resident, told the Star that rains started at 3pm and caused massive destruction.

"They pounded until 8am on Tuesday. We confirmed 1,500 sheep and goats were lost as a result," Mohammed said on phone.

He said residents told them more livestock died in floods in the Huri hills.

"Those who lost their livestock are hopeless. They do not know what to do next," Joseph Guyo said.

Godana Guyo, 34, from Baldesa said he lost 120 sheep and goats in Huri hills.

Guyo said he depends on livestock.

“Over the past 14 days, increased rainfall was reported in eastern Kenya and southern Somalia which led to flooding in Kitui county.

"Over the past 30 days, below average rainfall was experienced throughout the region.

"Over the past 60 days, below-average rainfall persisted over southern Ethiopia, Kenya and Somalia. This lack of rainfall led to dry conditions across the Horn of Africa,” the early warning report said.

Brace yourselves for a wet January, Weatherman tells Kenyans

Most parts of Nairobi County likely to receive moderate to heavy rainfall.
News
6 months ago

Nairobi would experience moderate to light rains in the afternoon.
News
7 months ago
by JOHN MUCHANGI Science Editor
News
21 January 2022 - 23:00