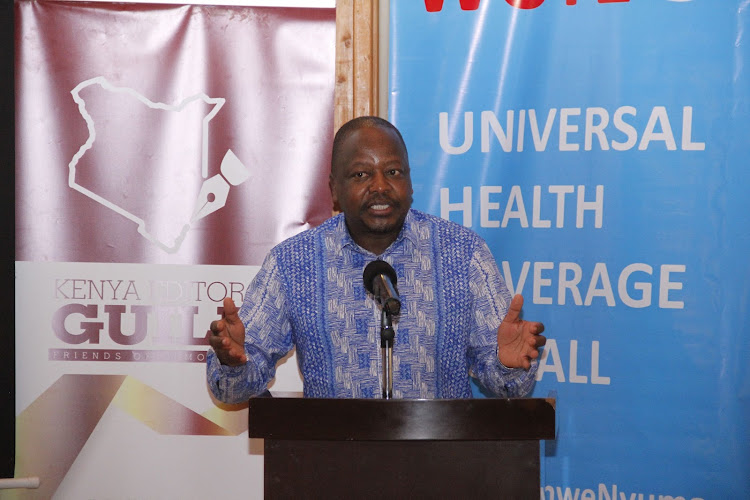 Health CS Mutahi Kagwe speaks during a retreat between editors and Ministry of Health officials in Malindi on Thursday
Image: TOM JALIO

Kagwe took office in February 2020, just before the Covid-19 pandemic struck. What followed was a procurement scandal commonly known as the Covid billionaires scandal.

The CS said since then, he has noticed a tremendous change in media coverage of the Health ministry from complete negative to constructive criticism and lots of positive stories as well.

“I don't think in my time, other than this aspect where we converted millions to billionaires — how you make billionaires out of millions I've never known — but other than that, I can honestly say that scandals and those kind of things, the last time I heard about that is when we were being told about that thing.”

He was speaking during a retreat in Malindi between editors in mainstream media houses and senior officials from the Ministry of Health. CAS Mercy Mwangangi was also in attendance.

Kagwe said the ministry's outlook has improved thanks to many changes internally.

“Because when you hear of corruption and you hear of mafia, they are not Italians. They do not come from Sicily. They come from your midst. And mine. And they are in MoH and Nation and the other media houses,” he said.

“So those cartels are the ones that are called the mafia. But I’m looking at the people today who are so committed to cleaning up the ministry. So committed to providing service. And I could not be more proud of them.

“I am convinced that now we are Afya House, not Mafia House.”

Earlier, Kenya Editors Guild president Churchill Otieno had urged the ministry to ensure there is accountability in the use of resources as it fights the Covid-19 pandemic.

He also called for a curative approach to healthcare as opposed to preventive.

Kagwe said he had raised that issue. “We have learned that hygiene is also very important. Sanitising, washing hands – nobody would have imagined that they are that important,” he said.

The CS said nowadays, it is hard to get someone with a serious cold. If you cough people think you have Covid. Few people are coughing because we have improved our hygiene standards, he said.

“It is important for us to tell this story.”

He said more needs to be done, especially at county level. “Why can’t the markets be cleaned? Like Singapore,” he said.

“Cleanliness is next to godliness. Unless we keep singing this song, we will not get anywhere.”

Regarding enhancing community access to health services, he said the ministry has hired people from county governments because they have an understanding of the grassroots problems.

He also addressed what Nation health editor Bernard Mwinzi called the adversarial relationship between journalists and scientists at the ministry.

He said a lot of the people working for the ministry were “stolen” from media houses to enhance communication. He made some of them stand up to introduce themselves and their backgrounds.

“We need to strengthen the relationship between the media and MOH and get to understand how both work. More so, help us understand what constitutes news.”

He said this could help because “you can be doing something important but nobody knows”.

On Universal Health Care, Kagwe said UHC is not an event. “All the things we are doing. MES [Managed Equipment Services] is UHC. You cannot talk about UHC without access to healthcare.”

The January 19-22 meeting comes against the backdrop of governance concerns about the health sector, including corruption cases at the Kenya Medical Supplies Agency.