• He said in its voluntary state, the NHIF was used and dumped by opportunists 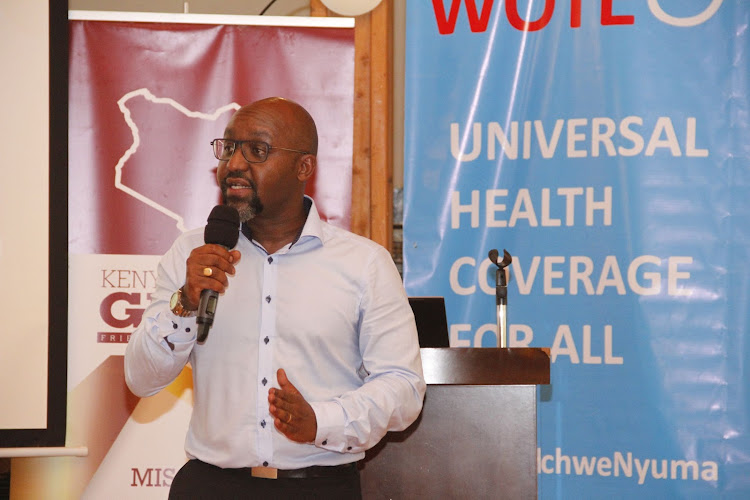 Compelling Kenyans to be members of the National Hospital Insurance Fund was necessary for its sustainability, CEO Peter Kamunyo has said.

Kenyans reacted furiously to the proposal by Treasury in February last year, which Parliament eventually passed in September. It will come into effect once it is assented to by the President and gazetted.

He was speaking during a retreat in Malindi between editors in mainstream media houses and senior officials from the Ministry of Health, led by CS Mutahi Kagwe and CAS Mercy Mwangangi.

Members pay Sh500 per month or Sh1,700 for the higher-end employed folk. The fund seeks to provide accessible, affordable, sustainable and quality health insurance for all Kenyan citizens.

As at December 31, 2021, only 20 per cent of registered voluntary members were active.

Kamunyo said most Kenyans tended to only contribute to NHIF in times of emergency, forcing the government to source funds elsewhere to support members, which led to huge losses.

“When you know you are pregnant or you need a surgery, you start paying for it. Then after you have been helped, you disappear,” Kamunyo said.

“Only those with a chronic need continue paying, but if your need has been met, you go.”

The CEO said only 2 per cent of Kenyans are covered by private insurers. Their premium was Sh44 billion last year.

Kamunyo said KNH was last year the top-most reimbursed hospital by NHIF, adding that reimbursement rates have been standardised with new reforms in NHIF.

He said Health CS Kagwe is famous for two sayings: If you treat a diseases normally, it will treat you abnormally, and put a smile on a patient’s face.

Again likening it to motor vehicle insurance, Kamunyo said, “You may not like paying premiums but the day you have an accident and you know you have insurance, the joy you feel is what brings a smile on your face.”

Last year, 89 per cent of the money went into paying claims. Kamunyo said fraud is a big problem.

“Half of them is impersonation. You give someone your card. It creates problems because the death certificate comes in your name,” he said.

“If we can save that money, we have more available to pay.”

He said NHIF is now moving to biometric recognition, using your face or eyes to verify who is using the card.

On not getting services, Kamunyo said we need to stop winking in the dark and know where to get those services.

He said NHIF has done many promos and urged the media to help create awareness. The website has also been updated to ensure the information is easily accessible.

“The rate is Sh17 for a family, and you get all those benefits.”

“And hospitals should stop lying to patients that NHIF will not pay for this or that. Why do they say that? Because they want you to pay cash,” he said.

On how they identify indigents or vulnerable people, he said they use available statistics (for instance, from KNBS) as well as community health workers who know the people on the ground. Then they take them through a verification process.

The January 19-22 meeting comes against the backdrop of governance concerns about the health sector, including corruption cases at the Kenya Medical Supplies Agency, commonly referred to in the media as the Covid billionaires scandal.

All facilities are now working in 98.5% of hospitals, George Ooko said

Editors call for accountability in Ministry of Health