• National Assembly’s Procedure and House Rules Committee wants MPs to repeal Section 34(2) of the Forest Conservation and Management Act of 2016.

• The section compels those agitating to have boundaries of protected forests to seek concurrence from KFS.

•This means KFS will lose a say in the excision or alteration of protected forest boundaries if the amendments sail through. 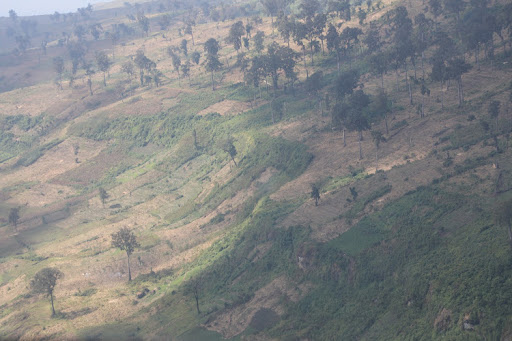 Conservationists have warned that Kenya is set to lose more than half of its protected forest should the proposed amendments to forest laws sails through.

They warn that the proposed amendments will water down the central role played by the Kenya Forest Service in the excision or alteration of protected forest boundaries.

National Assembly’s Procedure and House Rules Committee wants MPs to repeal Section 34 (2) of the Forest Conservation and Management Act of 2016.

The section compels those agitating to have boundaries of protected forests to seek concurrence from KFS.

This means KFS will lose a say in the excision or alteration of protected forest boundaries if the amendments sail through.

The changes are contained in Forest Conservation and Management (Amendment) Bill, 2021.

Following the tabling of the changes in the floor of the house, nature lovers have warned that the proposed changes will bring doom to the country.

Among Institutions that have rejected the proposed amendments include the Kenya Forest Service, East Africa Wild Life Society, Rhino Ark and Conservation Alliance of Kenya.

KFS is the national agency responsible for the conservation and management of public forests.

KFS board chairman Peter Kinyua says the section proposed for amendment protects public forests from boundary variations and excisions that would otherwise endanger forests and their rich biodiversity.

Kinyua says the section also protects water catchment areas that are critical for environmental stability, human well-being and economic development in the country.

“The current law requires KFS to make technical recommendations to Parliament on the effects of any proposed forest boundary variation or excision on endangered, rare and threatened species and the ecologically sensitive areas,” Kinyua says.

Kinyua says KFS is required to ensure that any proposed variation of forest boundary is approved by the Local Forest Conservation Committees, has undergone Independent Environmental Impact Assessment and full public participation.

“This is the section that has enabled KFS to protect the existing public forests for provision of water, conservation of biodiversity and supply of other forest goods and services.”

Kinyua says removing the proposed section will spell doom for the country.

“It will reverse the gains made over the past 15 years in restoring our public forests and water catchment areas, compromise the protection of these forests and thus deny Kenyans access to these forest goods and services which are critical to their survival,” he said.

Ogonje says the 2018 Taskforce Report on Forest Resources Management and Logging Activities in Kenya showed that the sector contributes about Sh 7 billion to the economy.

Ogonje says the forest landscape has changed and requires that management and policy decisions on forests involve stakeholders such as the communities, county governments, civil society and the private sector, among others.

“The review of Forest Policy in 2018 and the Forest Conservation and Management Act (2016) also recognizes the role of non-state actors in the management of this resource,” she says.

Ogonje says EAWLS, which is a conservation organisation that prides itself on being the voice of conservation in the region as it has taken note of efforts by the Ministry of Environment to ensure that the country attains 10 per cent tree cover.

This, she says is through several projects such as the national tree-planting programmes that aim to plant two billion trees by 2022 and the reforms in the sector therein.

Ogonje says the section set to undergo amendments was inserted into the Act to ensure that the delineation of public forest boundaries is carried out through a structured and consultative process.

“The aforementioned deletion gives powers to the parliament to unilaterally excise forests without public consultation, environmental impact assessment and the authority given to the Kenya Forest Service to provide technical input in such processes.”

Ogonje says if the amendment sails through, it would mean that the country will lose its forest cover through dubious variation of boundaries and excision of forests, wiping out gains made in decades to restore forest cover while mitigating the effects of climate change.

“The timing of the amendments also raises suspicion. We call upon all Kenyans to stand up for conservation and speak out against attempts to water down the protection of our forests.”

Ogonje says members of parliament should withdraw the proposed amendment as it is in bad faith.

Rhino Ark, a charitable trust to help save Kenya’s flora and fauna says “the amendments should not be allowed to happen.”

“Rhino Ark is deeply concerned by the proposed amendment to the Forest Conservation and Management Act 2016. This amendment would take away the authority of Kenya Forest Service to review and sanction any proposed public forest boundary alteration, in particular excision,” Christian Lambrechts, Rhino Ark executive director says.

Lambrechts says the current Forest Act and its Section 34 (2A) was drafted in response to arbitrary excisions that led to wanton destruction of forests in the 1990s and early 2000s.

“Section 34(2A) requests that any proposed public forest boundary alteration or excision be first sanctioned by the Board of the Kenya Forest Service before being submitted to the National Assembly for endorsement,” he says.

Lambrechts says the repeal of Section 34(2A) will be a major setback in the protection of our public forests and will open avenues for the grabbing of public forest land.

“It will inevitably lead to the loss of forests and their diverse wildlife,” he says.

Lambrechts says the move will also lead to the destruction of critical water catchment areas that provide vital ecological services securing environmental stability and supporting our well-being and economic development.

“Considering what Kenya has lost in the past, any change that weakens, rather than strengthens the mechanisms to protect our forests, is ill-advised.”

“We know the impact of Mau settlements, there was a reduced water level but it was reversed when it was restored,” she says.

Waruinge says there is a need to understand forests as natural resources as an asset as they provide water and other ecological services that support our wellbeing and support the economy.

She warns that well-being will be worse off if the amendments are allowed.

Waruinge says the move will water down ambitious pronouncements that the country has made locally and internationally such as the bid to increase the forest cover to at least 10 per cent by 2022.

The chair says weak forest governance had been singled out as one of the reasons why forests in the country are getting depleted.

Waruinge says the amendments will work against the government’s plans to increase tree cover.

She says the conversion of forest land into settlements, infrastructure puts forest at risk.

Waruinge says there is a need to look for alternative energy sources that are renewable to protect Kenya’s forest resources.

She says MPs are ill-informed about the benefits that come with forests resources.

“We completely reject the bill,” she says adding that they will engage MPs to understand the motivation behind the bill.

The changes come even as the outgoing Chair of National Assembly Departmental Committee on Environment and Natural Resources Kareke Mbiuki urges Kenyans not to read sinister motives in the amendments.

Kareke says there is a lacuna in the current Forest Conservation and Management Act of 2016.

“Kenyans do not need to seek concurrence from Kenya Forest Service before filing a petition with the National government. We want to cure the procedure,” Mbiuki says.

Mbiuki says the amendments will allow Kenyans to freely file petitions before the relevant stakeholders are given an opportunity to give their input.

A number of leaders, including MPs and Governors, have been agitating to have boundaries for protected forests altered in order to settle landless members of the public.

Some of the forests targeted include portions of Mau Complex, Ngong Road, Kamiti, Kiambu, Ngong hills and Mount Elgon.

Other risks are forest fires, mismanagement of plantation establishment
News
1 year ago

KFS lashes out at private sector for inducing its staff

The agency rejects attempts to sanction the variation of public  forests boundaries or their excision.
News
1 year ago
Post a comment
WATCH: The latest videos from the Star
by GILBERT KOECH News Reporter
News
18 January 2022 - 11:57
Read The E-Paper