It has for the time adhered to the cash disbursement plan

•Since the introduction of devolution in 2013, governors have complained of cash problems occasioned by the incessant delays by the Treasury to disburse the much-needed funds.

•The delays, the county bosses have said, have led to disruption of services, accumulation of huge debt and underdevelopment. 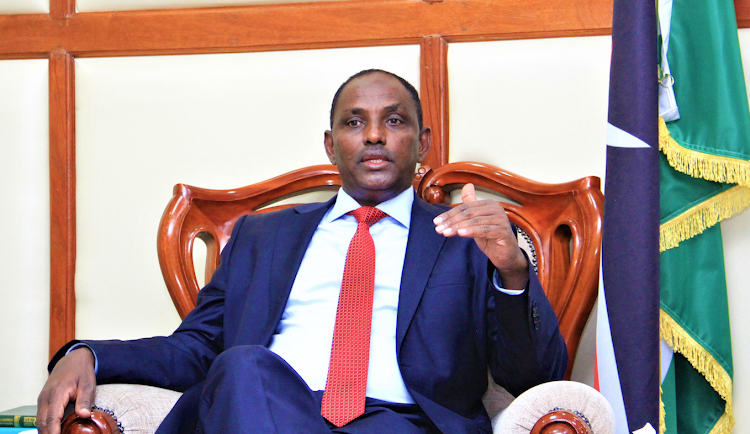 Treasury CS Ukur Yatani during an interview at his office on December 22.
Image: EZEKIEL AMING'A

Lack of cash will not be the reason for inferior services, delayed salaries, underdevelopment and huge debts in the counties in the current financial year.

The National Treasury has for the time adhered to the cash disbursement plan and ensured the timely release of the funds to the devolved units.

Since the introduction of devolution in 2013, governors have complained of cash problems occasioned by the incessant delays by the Treasury to disburse the much-needed funds.

The delays, the county bosses have said, have led to disruption of services, accumulation of huge debt and underdevelopment.

Even though the law allows counties to generate their revenue, most of them rely on the national government for funds.

The latest expenditure reports by Controller of Budget Margaret Nyakang’o shows the counties are missing their own source revenue collection targets and are relying on the Treasury for cash to offer services and pay salaries.

Often, the Treasury has blamed underperforming revenues and high revenue demand for the delayed disbursement.

However, the CS Ukur Yatani-led ministry appears to be breaking the jinx in the current fiscal year with the latest figures showing it is up-to-date with the disbursement schedule.

According to a gazette notice published by CS Yatani last Friday, the Treasury has released Sh144.98 billion in equitable share as of December 31.

This implies that the Treasury has released cash for the first five months of the fiscal year (July-November).

“The disbursements are better than previous years because by now, all the counties have received funds up to November and there are arrangements to give them monies for December,” Nyakang’o said.

The country’s budget boss said the Treasury has released cash for December to Mombasa which had requested advance release due to financial distress.

“Mombasa was in distress, I don’t know what they did with their money. They came to ask for money up front and they got it,” Nyakang’o said.

“There is a plan to give December money to counties in the coming weeks. It is much better than it has been in the previous years.”

The 47 counties were allocated Sh370 billion in equitable share in the current financial year.

They were also allocated Sh32 billion in grants but the same is yet to be disbursed due to lack of enabling legislation.

Last year, the governors threatened to shut down the counties due to a lack of funds occasioned by the prolonged delay by the Treasury to release county funds.

“Unfortunately, if the National Treasury fails to release the funds, counties will not be able to offer basic services, forcing the suspension of services or total shutdown,” Council of Governors chairman Martin Wambora said in June last year.

At the time, the Treasury had not released the cash, for some counties, for up to six months.

“The Treasury has not only failed to comply with the Constitution but also with its document- cash disbursement schedule, 2020,” Wambora said.

Article 203 provides that the counties shall be allocated not less than 15 per cent of the revenues raised nationally.

The Public Finance Management Act, the County Allocation of Revenue Act and the cash disbursement schedule approved by the Senate, requires the Treasury to promptly and without undue delay release the cash to the counties.

The money should hit the respective county revenue fund accounts held at the Central Bank by the 15th of every month for use the following month.

Post a comment
WATCH: The latest videos from the Star
by JULIUS OTIENO Journalist, Political and Parliamentary Reporter
News
17 January 2022 - 23:00
Read The E-Paper