Raila accused Ruto of failing to deliver promises he made to Kenyans.

• The ODM leader said that if elected, he will ensure all Kenyans are united and that no one will be discriminated against based on tribe.

• Raila questioned the source of money that Ruto has been giving to churches and in fundraisers. 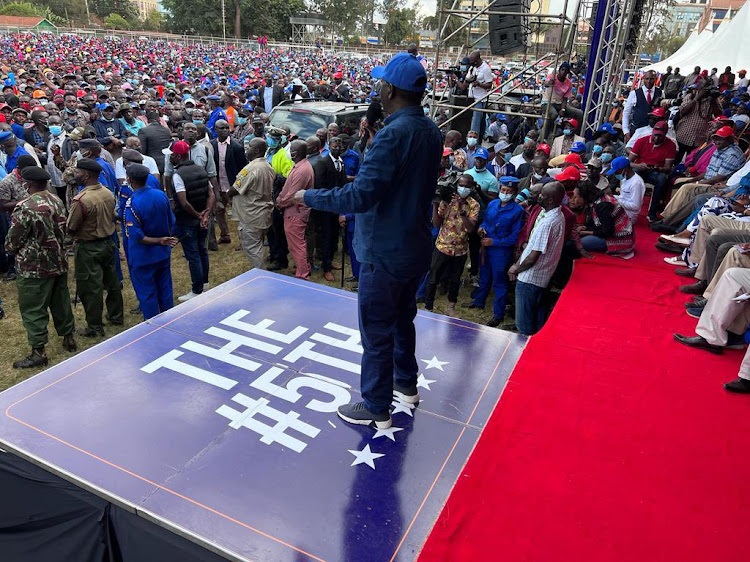 ODM leader Raila Odinga has yet again dismissed remarks by deputy president William Ruto that the handshake between him and President Uhuru Kenyatta derailed Jubilee's projects.

He said the DP had promised laptops to school-going children and stadiums to Kenyans but he has never delivered.

“Kazi imekushinda, wacha baba akuonyeshe vile kazi inafanywa (you have failed to deliver, let me show you how to get it done).”

While addressing the crowd in Thika Stadium on Saturday, he questioned the source of the money that Ruto has been donating to churches and in fundraisers.

Raila said his administration will ensure corrupt people are arrested and jailed.

He challenged the DP  to come clean on the source of the money he has been dishing to churches and buying buses for schools.

“He is now becoming more Christian than the Pope, you know that?… We will take them to Kamiti Maximum Prison,” Raila said.

“They think Kenyans are stupid.”

The opposition chief added that he will ensure all Kenyans are united and that no one will be discriminated against based on their tribes.

He criticized the recent remarks that were made by Meru senator Mithika Linturi and Aaron Cheruiyot of Kericho during the UDA rally in Eldoret saying all Kenyans have a right to live in any part of the country.