One will not be mistaken to say it is where Raila cut his political teeth.

• One will not be mistaken to say it is where the ODM leader cut his political teeth.

• This will be the first time Raila will be launching his presidential campaigns at the heart of the Mt Kenya region. 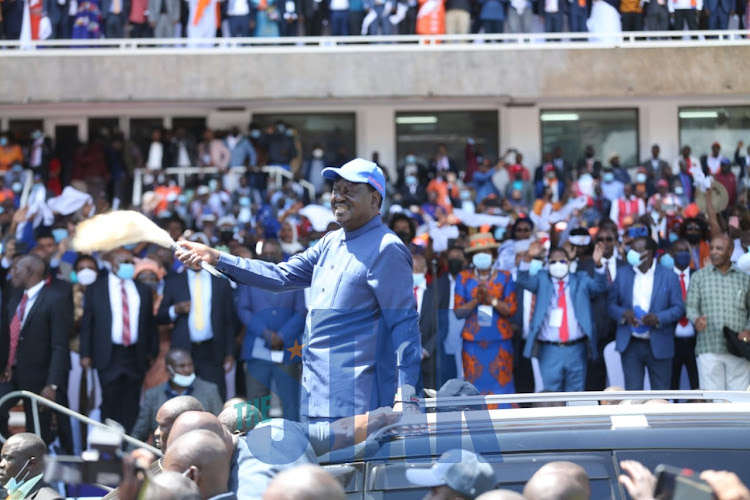 Thika stadium in Kiambu county is not an ordinary venue for the ODM leader Raila Odinga.

This will be the first time Raila will be launching his presidential campaigns at the heart of the Mt Kenya region.

Analysts say the move is strategically meant to affirm the region's backing of the ODM boss.

The choice of having his first mega rally of 2022 in a stadium that is domiciled in a region that has been cagey in supporting his presidential bids in the last two decades was obviously not a random thought.

It is symbolic and nostalgic about Raila's political story.

One will not be mistaken to say it is where the ODM leader cut his political teeth.

His first meeting at Thika stadium was in 1995 when he and former vice president the late Kijana Wamalwa battled for the control of the Ford Kenya party following the demise of his father Jaramogi Oginga Odinga, a year earlier.

Jaramogi until his death was the party leader of Ford Kenya.

The 1995 meeting was characterised by chaos pitting Wamalwa supporters against Raila's.

The meeting ended with Wamalwa winning the party leadership seat even as Raila's supporters opposed the outcome.

He joined the LDP party, became its leader and won back his seat in the by-elections that followed.

A decade later, Raila would go back to Thika stadium where he daringly launched the NO campaigns against the new constitution, not forgetting that the venue was home to the then-incumbent President Mwai Kibaki.

Kibaki was the de facto leader of the YES campaigns.

As he goes back to Thika stadium to create another historic moment in his political life, today's (Saturday) rally will be crucial for him in seeking the presidency for the fifth time now.

More than 20,000 people are expected to attend the Thika rally.

Organisers of the event said they expect people across the Mt Kenya region to attend.

At least 300 leaders, including governors, senators, woman representatives, MPs and MCAs are also expected to be present.

Raila will first meet delegates from Thika and parts of the Mt. Kenya region, youth representatives, and the business community at Happy Valley Grounds, in Mount Kenya University, Thika.

He will, thereafter, head to Thika Stadium for a public rally.