More than 20,000 people are expected to attend Raila's rally

• More than 20,000 residents are expected to attend Raila's rally.

• The DP will most likely use the Jacaranda rally to water down gains the ODM leader would have made after the Thika rally. 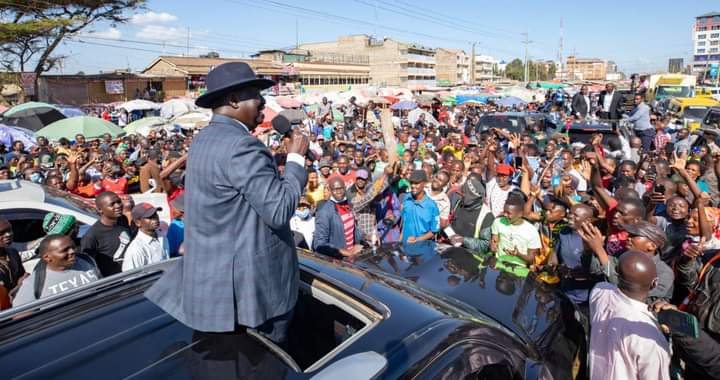 The gloves are off for the August 9, general elections.

As the ODM leader Raila Odinga heads to Thika for what has been termed by his handlers as "the mother of all Azimio rallies", Deputy President William Ruto is not resting easy.

Seen as counter-move to what will come out of the Thika stadium event today (Saturday), the second in command has scheduled a huge rally at Jacaranda stadium in Eastlands, Nairobi, on Sunday.

"Let's meet at Jacaranda Grounds in Embakasi East for a dialogue about the future of Kanairo and the country. Share your thoughts on how we can make the great city of Kanairo better. We are listening!" UDA party captioned a poster announcing the rally.

The DP will most likely use the Jacaranda rally to water down gains the ODM leader would have made after the Thika event in a bid to maintain his position as the man to beat in the August polls.

Opinion polls have ranked the DP ahead of Raila in the 2022 polls.

The Jacaranda rally is a culmination of a series of political meetings he has held in Nairobi this week.

The Thika rally will mark the beginning of the ODM leader's grand march to State House since he will be officially launching his presidential bid campaigns.

More than 20,000 people are expected to attend the Thika rally.

At least 300 leaders, including governors, senators, woman representatives, MPs and MCAs are also expected to be present.

Raila will first meet delegates from Thika and parts of the Mt. Kenya region, youth representatives, and the business community at Happy Valley Grounds, in Mount Kenya University, Thika.

He will, thereafter, head to Thika Stadium for a public rally.