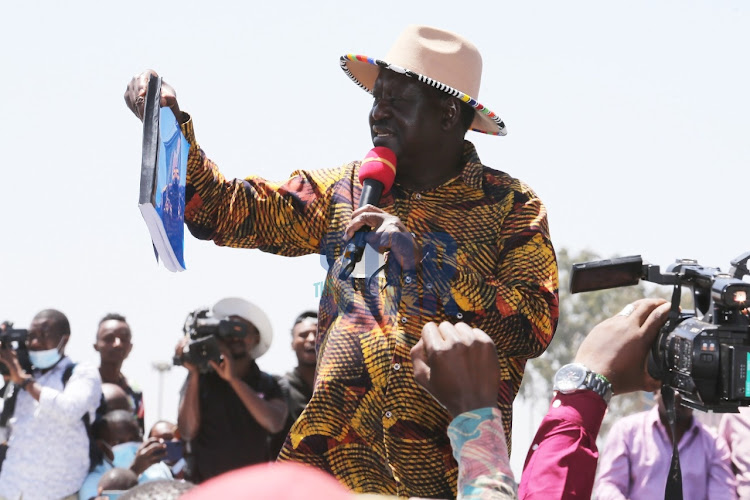 ODM leader Raila Odinga will on Saturday kick off his grand march to State House with a mega launch of his presidential campaigns in President Uhuru Kenyatta's Kiambu turf.

The Star has established that Mt Kenya business tycoons and political elites allied to President Uhuru are at the centre of the planning of the jamboree.

The Mount Kenya Foundation, the exclusive club of business magnets from the vote-rich region, have already endorsed Raila's presidency.

Saturday will offer the tycoons an opportunity to showcase their political muscle in the region by sponsoring what is seen as the biggest political gathering in Mt Kenya in the recent past.

On Friday, some of the President's allies tipped the country for what they termed as 'the mother of Azimio rallies', setting the stage for a bruising battle with Deputy President William Ruto.

Kieni MP Kanini Kega, a key ally of the President, told the Star that the rally will be Raila's launching pad for his fifth State House bid.

The Azimio La Umoja linchpin from Central Kenya said Raila supporters from both Kiambu and the neighbouring Murang'a counties will throng the Thika stadium in droves.

This even as it emerged that the choice of Kiambu for the unveiling of Raila's journey to the House on the Hill was strategically selected because of its massive political symbolism.

Kiambu is the country's single most populous county in terms of the number of voters, giving it huge political significance in the state house battle.

Any candidate who wins Kiambu is seen as having a head start in the August race to succeed President Uhuru Kenyatta.

The county is also regarded as the gateway to the vote-rich Mt Kenya.

On Friday, Kega explained that whoever seeks to win the Central vote basket must first secure the support of Kiambu.

“Kiambu is the gateway to Central,” he told the Star on phone.

It has also emerged that Raila's supporters chose Kiambu because of the massive losses it suffered following the collapse of the Building Bridges Initiative Bill.

On Saturday, Raila is expected to seize the opportunity to outline the benefits that Kiambu would have gained had BBI been approved in a fresh fight against  Ruto.

In Kiambu, the Star has established that Raila is going to speak to the underrepresentation and resource allocation, issues that were tackled in BBI.

Kiambu was to get six additional constituencies out of the 70 that were created by the botched BBI Bill.

DP Ruto led the forces that opposed the BBI and called for its rejection.

It is these lost gains that Azimio is seeking to milk as it woos the region that has demanded for more allocation and representation given its huge population.

Former Dagoretti South MP Dennis Waweru on Friday told the Star that the issue of resource allocation and underrepresentation will prominently feature in the Saturday meeting.

The former co-chairperson of the BBI added the rally will address pertinent issues affecting the everyday lives of the people, and which BBI was supposed to address.

“We are also going to address underrepresentation of the Kiambu county.”

Uhuru forces say the launch will set Raila’s presidential candidature on a firm trajectory as he seeks to dislodge Ruto out of the region.

Waweru said the launch will be followed by a series of rallies across the country to market the former prime minister who is making his fifth stab at the presidency.

“After that we will line up other places. Our competitors have been saying that we have not been campaigning. This is the time that we are now hitting the campaign trail,” he said.

On Tuesday, Raila’s chief campaigner and Laikipia Governor Nderitu Muriithi promised a campaign like no other.

According to Nderitu, Raila’s campaign board is putting everything in place to vanquish Ruto and deliver a landslide victory in the August 9 election.

Raila was on Friday in Taita Taveta county where  he launched several water projects.

He also addressed two rallies at Overseer and Mwatate towns.

How Ruto is putting pressure on Raila in State House race

The DP is making another grand return to Nairobi days after invading the city in a charm offensive.
News
2 weeks ago

Raila's chief campaigner Ndiritu promises race like no other