STORM IN THE CITY

The DP said the government will pay NHIF contributions for poor Kenyans who won't afford.

•The DP is scouring Nairobi for the second day running, stirring residents with a raft of pledges.
•Ruto has heightened the battle for the control of Nairobi politics against Uhuru and Raila. 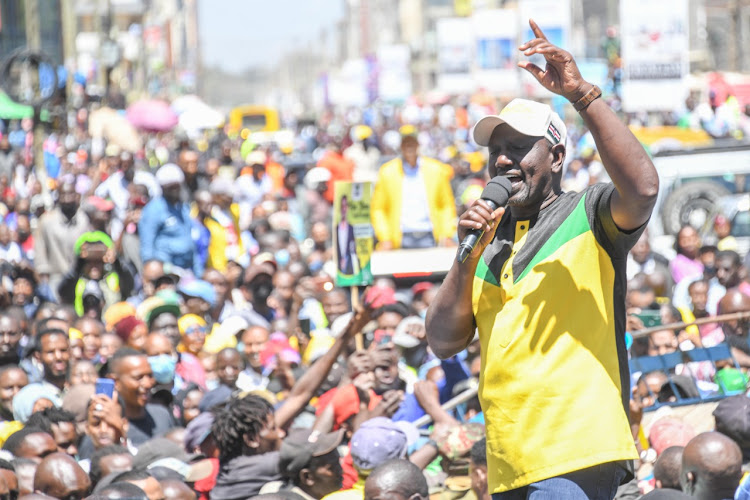 The DP who is scouring Nairobi for the second day running, told the poor not to worry about NHIF contributions, saying if elected, they will start to reap benefits by December.

Speaking during his frenetic presidential campaigns stopovers in Roysambu constituency, the DP declared that the current NHIF scheme is tailored to benefit the rich.

Ruto said his administration will ensure that their is fairness in the NHIF Contributions so that those who earn more, pay more to access the public insurance programme.

The DP said he will roll out a massive health security programme for all Kenyans to ensure that every Kenyan gets enrolled in the NHIF scheme before the end of the year.

"There is no way Mama Mboga can pay the same amount as the deputy president, by the end of the year we will ensure that Kenyans will pay according to their income," Ruto said.

"Those who will not afford, the government will pay for them."

Ruto has heightened his campaigns across the vote-rich Nairobi county, taking his campaigns to city estates in a fierce battle against ODM boss Raila Odinga.

The DP's hustler movement is plotting to upstage the handshake in race for city seats as the presidential battle takes shape.

The DP rubbished Raila's that he is giving handouts to Kenyans saying he will roll out a massive Sh50 billion kitty for small businesses.

"The Sh2 million Mr. kitendawili (Raila)is talking about is just a drop in the ocean, we will pump sh50 billion to these hustlers once we form government," Ruto said at Githurai 44.

The DP is accompanied by a host of aspirants eyeing the United Democratic Alliance tickets for various city seats.

Ruto urged Nairobi residents to come out on August 9 and vote for the hustler government.
Counties
4 days ago

Ruto charms Nairobi with a bag of promises

Ruto: I’ll do away with slums if elected president

Ruto also reiterated that he will not yield to threats and intimidations.
News
4 days ago
by JAMES MBAKA Deputy Political Editor
News
14 January 2022 - 13:43