DCI said the suspect was part of a criminal gang that terrorized residents of Nyeri.

• Robert Gathogo Ngunjiri also known Abdurahman Hija Mnubi, 27, was arrested on Thursday in Nyeri after surrendering himself and pleading his innocence. 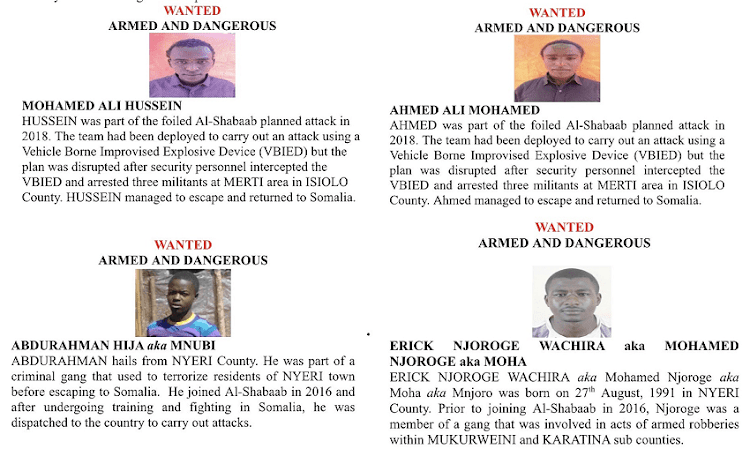 A terror suspect who the  Directorate of Criminal Investigations (DCI) listed as the most wanted has surrendered.

Robert Gathogo Ngunjiri also known as Abdurahman Hija Mnubi, 27, was arrested on Thursday in Nyeri after presenting himself to police where he pleaded his innocence.

Officials said the suspect surrendered after learning he was wanted.

He was taken to custody for questioning, a senior officer said.

This came hours after the DCI released his name and photo describing him as “armed and dangerous”.

The DCI appealed to members of the public to volunteer information that may lead to the arrest of the eight suspects who have been linked to the al-Shabaab terror network.

According to DCI, the suspect was part of a criminal gang that terrorized residents of Nyeri town before escaping to Somalia where he is believed to have joined the al-Shabaab militants.

" He joined al-Shabaab in 2016 and after undergoing training and fighting in Somalia, he was dispatched to the country to carry out attacks," DCI boss George Kinoti said in its notice.

The suspect who is in police custody pending further investigations said he was imprisoned at King’ong’o maximum prison in Nyeri over a robbery with violence case.

He was sentenced to death but the court overturned his conviction and was released in January 2019 following a successful appeal.

It comes at a time the country is on alert over reports of plans by terrorists to attack the country.