Ruto charms Nairobi with a bag of promises

• Ruto said his first priority, if elected president, will be to turn around the economy of the country to ensure a decent lifestyle for all. 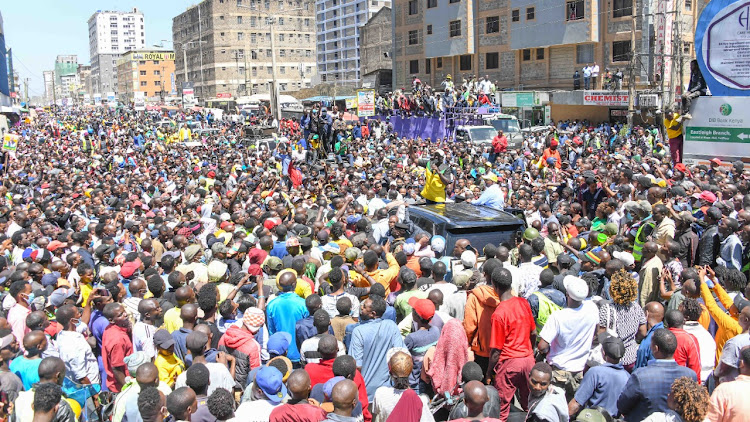 Deputy President William Ruto on Wednesday embarked on a series of campaign rallies in Nairobi.

The campaign trails were characterised by the DP's pledges to Kenyans and numerous attacks aimed at president Uhuru Kenyatta and the ODM leader Raila Odinga.

Ruto said his first priority, if elected president, will be to turn around the economy of the country to ensure a decent lifestyle for all.

He accused Raila of instilling fear and entrenching ethnic politics.

"They are telling us to prioritize the change of constitution and accommodate more people in the government by creating more positions," Ruto said.

He accused the ODM boss of seeking to introduce an imperial presidency that will control the judiciary and the national assembly.

"We need a president who will work for all of us," he said.

The second in command dismissed Raila's pledge that he will be giving Sh6,000 to uplift poor families from harsh economic conditions saying what the people need is jobs, not handouts.

Ruto said he did his part to help Odinga become the prime minister in 2007 and president Uhuru to ascend to power adding that his turn to work with hustlers has come of age.

The DP urged Raila not to worry about the Sh2 million he has been giving to boda boda operators and mama mbogas adding that more money is in the pipeline for them under his government.

"Most of the small business people don't have security for bank loans. We will set aside Sh50 billion for them that will be brought to the ward level," he said adding that it will work like CDF.

The DP said 80 per cent of small businesses drive the economy of a country hence the need to support them.

He said the youths who account for the huge population have plunged into alcohol and drug abuse, something his government will critically look into.

Before the end of the year, Ruto promised every Kenyan will have an NHIF cover.

He said everyone will contribute to the fund according to what they earn and the government will step in for those not earning anything.

This, he said will ease access to free medical services.

"I know what I'm saying and as the deputy president of the republic, I'm not stupid," he said.

The DP said the government had done a lot by upgrading the health sector within Nairobi county.

He said Mama Lucy hospital has been equipped for Sh500 million, while Sh500 million has been set aside for Mathare and Sh1 billion for Kenyatta National Hospital (KNH).

He also said Sh700 million has been allocated for Mbagathi.

Ruto promised to put up 20 markets within Nairobi once he ascends to power.

Leaders who accompanied him in various rallies maintained that Kenya belongs to all.

"We will not allow a government project to be imposed on us," Garissa Township MP Aden Dualle, an ardent supporter of the DP, said in Embakasi.

Duale rekindled president Uhuru Kenyatta's failed attempt at the presidency in 2002 saying he was imposed by the late former president Daniel Moi resulting in his defeat.

He urged Uhuru not to balkanize the county even as his tenure nears home stretch.

Duale said the coming election will prove that the poor can dine with the rich at the high table.

Those present during the campaign trail included MPs Rigathi Gachagua, Millicent Omanga, Kimani Ichungwa and Bishop Margaret Wanjiru and a host of aspirants.