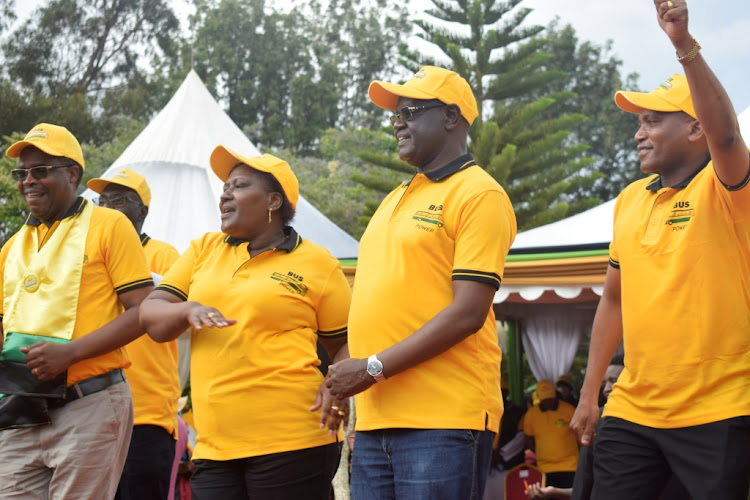 The Devolution Empowerment Party endorsed the appointment of Laikipia Governor Ndiritu Muriithi as the chairman of the Raila presidential campaign board.

On Wednesday, Raila attended the funeral service of seven people killed in Meru alongside Kiraitu. This gave an indication that the two will remain together ahead of the August 9, polls.

The fresh dalliance could end speculations that Kiraitu had changed his mind on his support for Raila especially after he declared last month that it is his DEP party that will make the final decision.

The governor had said party delegates will have the ultimate choice between Raila and Ruto in what triggered speculations that the county boss was considering backing the DP.

In a statement signed by DEP secretary general Mugambi Imanyara, the party said on Wednesday that it will do whatever it takes to support Muriithi’s efforts to campaign for Raila.

“In the interest of lending a hand for the success of Azimio la Umoja electoral strategy and continued prosperity for Kenya, DEP will spare no effort in supporting Muriithi in whatever shape or form that he may require especially in the Mt Kenya region,” Imanyara said.

The Kiraitu party’s endorsement of Muriithi’s job to chair Raila’s presidential campaigns is seen as a direct political backing of Raila, who is leading the Azimio bandwagon.

“DEP has full confidence that Muriithi is up to the task for the job. He brings to the job sterling academic and technical credentials, excellence and demonstrated management skills,” Imanyara said.

The party said the appointment of Muriithi to head the highest-level organ of the Azimio la Umoja election strategy was an expression of confidence not only in Muriithi’s skills and talent, but also his political acumen.

“...also the unreserved confidence that the candidate, Raila Odinga has in the entire Mount Kenya region will play a critical role in planning and execution of his manifesto and policy priorities of his administration,” DEP said.

Last week, Raila picked Muriithi, a first term governor and nephew of retired President Kibaki, to head his presidential campaign board, breaking away from the dominance of the Luo community in his campaigns.

Raila was accompanied by Siaya Senator James Orengo at the Meru service.

Kaithia said the Bus has been parked since 2017, it is dangerous to users.
Counties
2 months ago

Munya, Kiraitu vow to lock UDA out of Meru

The two have declared support for ODM leader Raila Odinga as president in 2022
Counties
3 months ago
by STAR REPORTER
News
13 January 2022 - 06:40