County commissioner Richard Karani says they expect to have Okwach retrieved in less than seven days.

• Two miners died while six others were rescued.

• Of those rescued, three survivors were pulled out alive after six days inside the earth. 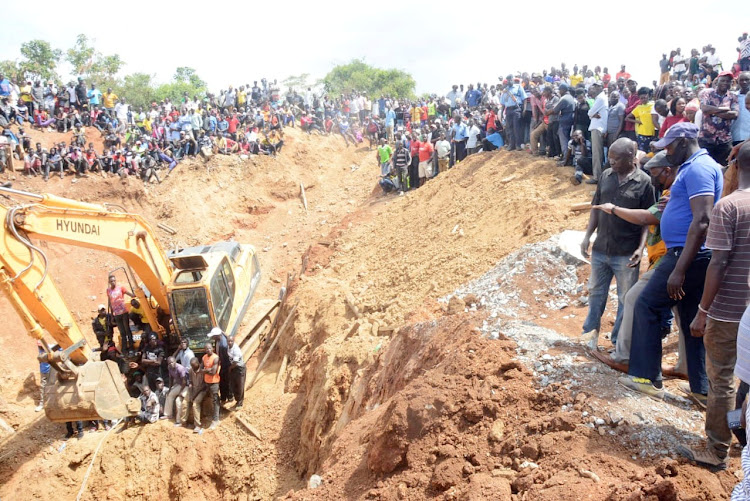 Hopes of finding Tom Okwach alive are dimming more than a month after a gold mine collapsed and buried him in Siaya.

Thursday will be the 42nd day since Okwach, 25, was buried alive at the Abimbo goldmine in Bondo on December 2 last year.

He was with other miners. Two of them died while six others were rescued.

Of those rescued, three survivors were pulled out alive after six days inside the earth.

The three had been communicating with rescuers.

His mother Joyce Oluoch had been hoping Okwach would be pulled out alive.

She pegged her hopes on the Christian belief that a man can survive without food for 40 days.

In the Bible, Jesus was tempted by the devil for 40 days. He ate nothing for those days.

But those hopes appear to have dimmed after the lapse of the 40th day on Tuesday.

"Work is on but has been sluggish. My son has not been retrieved and we are very afraid. Let anyone who can help me do so for me to have my son back," Aluoch told the Star on Monday.

Okwach's brother Stephen Aliwa said he was still hopeful his brother would be found alive.

Most residents who were supporting the rescue mission got tired at some point.

"Contrary to what we are hearing, no money has come from the county. We have suffered a lot in the last three weeks. We have had to look for money and pay for excavation, buy fuel and food that the volunteer rescuers have been eating. The family is in serious debt," Aliwa said.

But Siaya Administration and Governance chief officer George Onyango said Sh6.37 million was last week approved for use in the rescue mission, but there is a committee that handles the cash and not the family.

"The amount was approved by the County Disaster Management Committee a week ago, but we do not give it to the family," he said.

He said the county government of Siaya is continuously supporting the rescue works at the site.

Shining Hope for Communities, a local NGO, has joined the rescue mission.

"We are supporting with fuel for the excavator, food for the family and feeding programme for the 40 youth who are involved in the rescue mission," Shofco's Nyanza region chairperson Elisha Ogunda said.

"Work is on and we know that he will be found in less than a week," he said.

Those rescued have since narrated their ordeal. They said it is dark inside the mine with insufficient oxygen.

"The mine caves are ice-cold due to water droplets on the surface of the ragged walls. The water is dirty and salty but we drank it to survive," one of them said.

Locals estimated that Okwatch’s body was 15 feet underneath the earth.
News
2 weeks ago

We were asleep when rescuers came – gold mine survivors

They huddled in a cold, wet and dark cave, drank salty water, listened to crickets.
News
1 month ago

One person is still trapped and efforts to get him out are ongoing, she said.
News
1 month ago
by JOSIAH ODANGA
News
13 January 2022 - 06:20