Administrator wants to succeed Patrick Khaemba who is completing his second term. 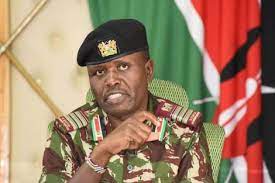 Rift Valley regional coordinator George Natembeya has announced he will resign next week to vie for Trans Nzoia governor.

Natembeya said he has been in public service for more than 25 years and would use his experience in leadership to transform the county.

“My rivals have been asking me to remove my official uniform and come to Trans Nzoia. As from next week I will embark on the campaign trail to teach them about leadership," said Natembeya who spoke in the county on Monday.

He has, however, not revealed on which party he will vie for the seat.

The regional coordinator said the county has lagged behind in development due to bad leadership but when elected he will transform it for the better.

"As from August politics in Trans Nzoia will take a complete turn. It will be the people first and then leaders last," said Natembeya.

He said he would adopt an open door leadership style and be easily accessible to residents.

Natembeya further said if elected he would first appoint an all-inclusive cabinet that will be the face of all the communities in the region.

The regional coordinator said all primary schools would have modern ECD centres and within his first five years in office residents would have easy access to water in their homes.

“I will also complete the Kitale Teaching and Referral Hospital and also ensure all subcounties have well functioning health facilities," said Natembeya.

Governor Patrick Khaemba is completing his second term and analysts say the race would be between Natembeya and Kiminini MP Chris Wamalwa who is a close ally of Ford-Kenya boss Moses Wetangula.

Natembeya is seen as a more assertive leader who has shown a tough approach to issues and he is also influential in Trans Nzoia where he has helped to push for completion of several national government projects.

Many professionals and community leaders are reportedly backing Natembeya.

Defense CS Eugene Wamalwa has in the recent past indicated at public functions that he would support Natembeya.

Sources indicate that Natembeya may vie on a DAP party ticket which was formed recently and is associated with the CS.

Others eyeing the seat include a long-serving member of Khaemba’s cabinet. Finance Executive Boniface Wanyonyi who says he wants to build on the legacy of his boss.

Also said to be in the race is Abraham Singoei and Maurice Bisau, both who work in the office of Deputy President William Ruto.