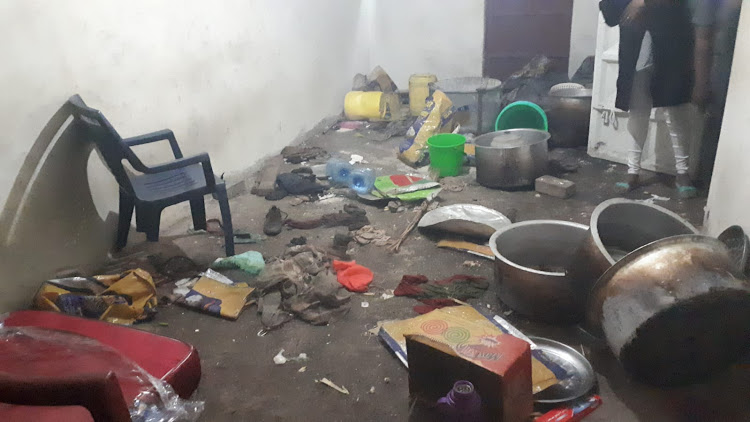 One of the rooms in which the arrested Ethiopians were found hiding before they were arrested on October 29, 2021.
Image: GEORGE OWITI

Dozens of Ethiopian nationals have in the past week been nabbed in parts of Nairobi and its environs for being in the country illegally.

The victims did not have documents to qualify their status in the country and were on transit, officials said.

Immigration officials said more than 200 Ethiopians have in the past week alone been arrested and plans are ongoing to deport them back to their country.

The latest happened in Buruburu where 22 were arrested from a house they had been in for a week.

Police said they were tipped off over the presence of the men and women in the house. Some could not speak English or Swahili.

Some 66 others were last week arrested in the Kasarani area for being in the country illegally.

“We want them to get the legal documents as it is required in law,” said Director of Criminal Investigations George Kinoti.

The men and women told police they were headed for South Africa for jobs and had paid for the trip. The smugglers are yet to be found.

Police said they did not have any documents to state their immigration status and were detained before being handed to the immigration officials who will process their deportation back to Ethiopia.

This came hours after 91 others were found in a house in Kitengela on Sunday evening. They are all being processed for deportation.

According to the Directorate of Criminal Investigations (DCI), they were arrested at a house within the Milimani area.

"91, (of whom 44 are juveniles) were ferried to the location onboard a trailer and were being held temporarily as the smugglers sought means to sneak them to another country," the DCI said.

The immigrants were arrested after an earlier attempt to escape from a house where they had been detained.

Many Ethiopians are arrested in the country as they try to use this route to other places like Tanzania and South Africa.

Police and immigration officials have decried increased cases of Ethiopian aliens nabbed in the country while on transit to either Tanzania or South Africa.

Kinoti said the trend is worrying as the number of those being caught is on the rise.

“This is big business for smugglers or traffickers and must be stopped as it is illegal,” said Kinoti.

Officials from the Transnational Organized Crime are conducting joint operations to deal with the issue of human smuggling.

Tens of Ethiopians are annually arrested in Kenya while on transit and later deported. Most of those arrested come to Kenya to seek jobs or are on transit.

What is puzzling is how the immigrants manage to evade many police roadblocks mounted from the Moyale border where they use to Nairobi.

There are more than 20 roadblocks on the stretch, which raises the seriousness of the security agents taming the practice.