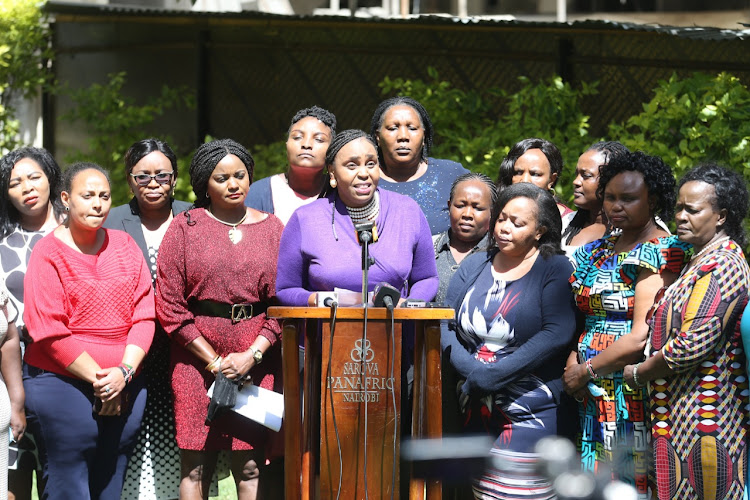 Women leaders from Mt Kenya led by Nyeri Deputy Governor Caroline Karugu on Monday asked authorities to be on the lookout for hate mongers.

Addressing a press conference in Nairobi, the women called for punitive measures against politicians propagating hate speech as they hunt for votes in the run up to August 9 general election.

They said that women and children are the worst affected by violence that is witnessed when communities are incited and turned against each other.

“Relevant authorities should should all play their roles to ensure arrest, prosecution and conviction of offenders now and going forward,” Karugu said.

Director of Public Prosecutions Noordin Haji has since directed Inspector General of Police Hillary Mutyambai to start investigations into the matter.

Haji, in a statement, said the utterances by the Meru Senator Mithika Linturi are akin to hate speech and incitement.

On Monday, the women under the Mt Kenya Women Leaders Caucus warned that laxity in handling hate speech cases during the electioneering period might open up the wounds of the 2007/2008 post-election violence.

The PEV resulted in the deaths of more than 1, 000 people and displacement of hundreds of thousands.

“Authorities must ensure there are severe consequences when it is established one has incited a community against the other,” Karugu added.

The sentiments came a day after Linturi was arrested for remarks which authorities said border on hate speech when he urged residents to remove people not supportive of Deputy President William Ruto’s bid.

The senator used the term “madoa doa” which means spots, when making the call.

The women condemned the remarks by Linturi, saying Kenyans must be allowed to elect the leaders they want without being coerced by politicians through incitements.

“Kenya is a democratic country and its citizens must be allowed to vote for the leaders they want without any form of coercion,” she added.

The women drawn from President Uhuru Kenyatta's backyard vowed to throw their weight behind a formation that supports unity of the country.

“We thank President Uhuru and ODM leader Raila Odinga for the 2018 handshake. Unity precipitates peace and thus leads to economic stability in the country,” Karugu said.

Deputy President William Ruto has since cautioned leaders in his United Democratic Alliance party against uttering statements that could be deemed hate speech.

Speaking during a rally in Bomet Green Stadium, Ruto said UDA will not tolerate remarks that are likely to cause ethnic division among Kenyans.

Raila also condemned the utterances by the senator, saying reckless and incendiary remarks will not be tolerated.

He dismissed the defence mounted by Tangatanga that the sentiments were taken out of context.