Why Ruto bowed to pressure, warned allies against incitement 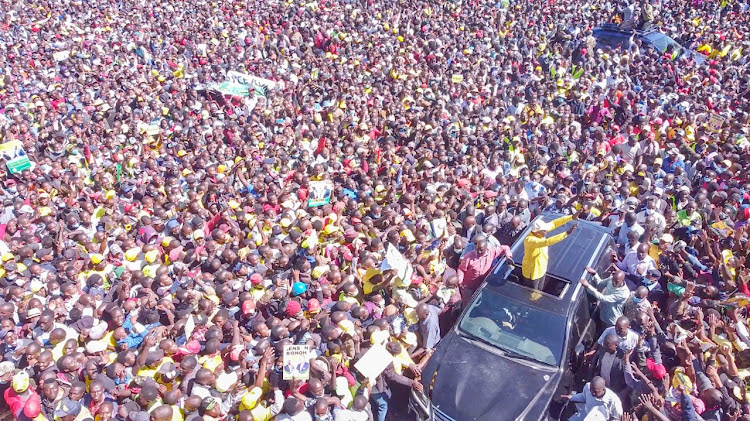 Deputy President William Ruto has launched an aggressive campaign to further control the damage on his presidential bid following warmongering remarks by one of his close allies.

Fearing that the madoadoa slur had assumed political dimension, the DP on Monday warned his Tangatanga troops to be mindful of their language.

The slur was quickly turned into a political fodder by the DP's rivals.

Coincidentally, Ruto was among those accused of being major perpetrators of the 2007-08 violence that landed him at the International Criminal Court in The Hague.

Speaking in Bomet on Monday, Ruto said his allies must desist from ethnic and tribal prejudices that could destabilise the country’s social cohesion as the country gears to the August 9 polls.

According to Ruto, United Democratic Alliance will not entertain warmongers who would be making reckless remarks that might be interpreted to mean that his 'hustler nation' is thriving in chaos and violence.

“I want to say here from Bomet that we don’t subscribe to any divisive talk," Ruto said.

"We do not agree with any talks that profile individuals, or groups or communities because we are a national party that brings all communities of Kenya together.”

The DP insisted that his troops must be measured in their statements in line with the UDA’s ideology of bringing Kenyans together.

UDA, he said, champions unity of the nation and does not subscribe to ethnic or regional, or village politics.

The DP was responding to a Saturday ‘madoadoa’ remark by Meru Senator Mithika linturi during his rally in Eldoret.

This was the first time the second in command was coming out to condemn Linturi’s remarks, seen to be bordering on incitement.

The senator was arrested on Sunday and driven to Directorate of Criminal Investigations headquarters in Nairobi where he recorded a statement regarding the inflammatory remarks.

He is also expected to appear before the National Cohesion and Integration Commission on Wednesday.

While condemning Linturi for his inappropriate use of language, Ruto also called for equal application of the law so as not to create a perception of two sets of law for different groups.

“I want to ask the institutions charged with making sure that we have a peaceful nation and election that they must apply the law in a manner that does not create two sets of laws for two sets of groups,” he said

He added: “We want every inciter in Kenya, whether they belong in UDA or the other side, we want the law to apply equally so that we can secure our nation.”

He welcomed the apology by the Meru senator, saying the 'hustler nation' is a home for all Kenyans and is at the forefront in preaching peaceful co-existence.

“Let me say that for those who are talking about Senator Linturi, he made a statement which he regrets; a statement that had inappropriate language, and... he has unconditionally apologised to the people of Kenya,” Ruto said.

He spoke at Bomet Green Stadium where he staged a huge campaign rally to popularise his presidential bid.

“We know the language of incitement when we hear it. We heard what they said in Eldoret. My message to them is ‘try and see'," Raila said on Sunday when he met the mothers of ex-Nyayo detainees in Kabete, Kiambu county.

“We have IDPs in various parts of this country due to political violence. We do not want to go back there.”

Mudavadi condemned the utterances insisting Kenyans are free to live in any part of the country.

At the Bomet rally, Ruto said UDA does not subscribe to any divisive talk, and is ready to battle for the top seat in a free and fair election.

He also took a jibe at the ODM leader terming him a tycoons' puppet who will protect the commercial interests of the wealthy billionaires, if elected.

The DP also reiterated the August election will be decided by Kenyans and "not billionaires sitting in a boardroom".

“We will not accept a puppet who wants to change the Constitution so that they impose on us a president who has the powers of a king.”

Linturi said his remarks were not meant to incite or propagate hate speech.
News
7 months ago
by LUKE AWICH Political Reporter
News
10 January 2022 - 23:00