Locals estimated that Okwatch’s body was 15 feet underneath the earth.

• Shofco began operations on Sunday afternoon after a request from Shofco Urban Network (SUN) members and the community.

• By the time of going to press, over 40 locals who are involved in the mission, were estimating that Okwatch’s body was 15 feet underneath the earth. 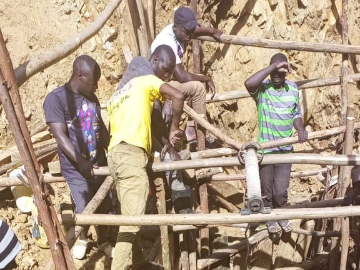 Shining Hope for Communities (SHOFCO) has taken over operations at the Abimbo gold mine in Siaya where 29-year-old Tom Okwach was buried alive 39 days ago.

SHOFCO began operations on Sunday afternoon after a request from Shofco Urban Network (SUN) members and the community.

“The community and SUN members requested us to talk to SHOFCO CEO Kennedy Odede to help in recovery operation after local leaders failed to aid the family in the mission. Odede agreed to their request and that is why we are here,” Elisha Ogonda, SUN Nyanza region chairman, said.

By the time of going to press, over 40 locals who are involved in the mission were estimating that Okwatch’s body was 15 feet underneath the earth.

The rescuers were estimating the operation to take four days.

“SHOFCO has taken over all the operations here and the costs associated with it. They are buying food for the rescuers, fuel for the generator to pump water, stipend for the 40 rescuers and tents and chairs for over 100 people at the site,” Aliwa Okwach, the brother to the victim, told the press.

The rescuers are running against time and are involved in the mission day and night.

“We are not going to rest until our brother is found. I called Okwach’s wife Jackeline and the brother Aliwa to pass my message that SHOFCO will stand with us until the end,” SHOFCO CEO Kennedy Odede said.

The mine collapsed on December 2, last year, killing one miner while seven others were rescued alive days later.

The family has been camping under a tree near the mine, hoping that their son’s body will be retrieved from the ground beneath.

“No leader has come to help us here. We are grateful to SHOFCO for this noble gesture. They have assured us that they will not live the scene until my brother’s body is found. SHOFCO CEO has also been in touch with to give us moral support,” Okwach said.

Okwach left behind a wife and two sons, the eldest being a six-year-old who is yet to return to school due to lack of school fees.

The family said they have so far used over Ksh300, 000 and they have sold everything the owned to rescue their kin.

“SHOFCO’s help came at a time when we were almost giving up because we could not afford fuel for the excavator on the site and it left. We were also unable to buy food for the rescue volunteers,” Okwach added.

According to the victim’s colleagues, he last spoke to them on December 9, one week after the gold mine caved in.

The government halted rescue operations on December 12, after walls of the mine collapsed due to a heavy downpour.