Linturi was arrested on Sunday at a hotel in Eldoret on claims of hate speech.

• Linturi was arrested on Sunday at a hotel in Eldoret on claims of hate speech and incitement.

• His other lawyer Kennedy Echesa said the prosecution must present his client to court today (Monday). 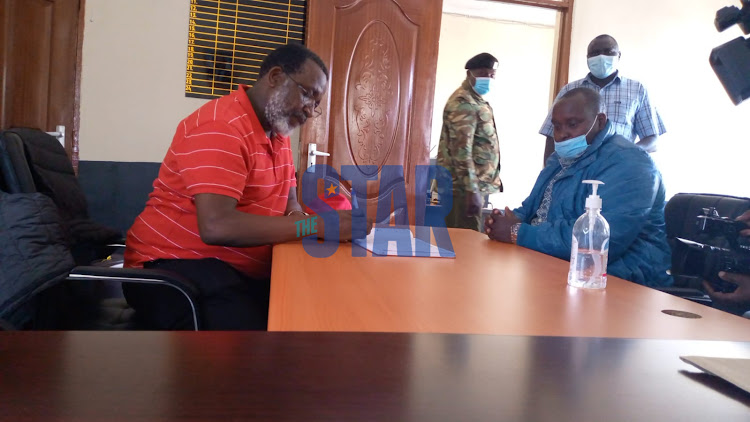 Lawyers representing Meru Senator Mithika Linturi have decried the manner in which their client was handled by the police and the Directorate of Criminal Investigations officials.

Speaking at Kaptembwo Police Station in Nakuru Town West where the legislator is being held, the lawyers accused security agencies of harassing their client.

Linturi was arrested on Sunday at a hotel in Eldoret on claims of hate speech and incitement.

This followed his statement at a rally organised by Uasin Gishu leaders allied to Deputy President William Ruto.

His lawyers Elias Mutuma and Kennedy Echesa said they hoped that Linturi would be charged in Nairobi only for him to be driven back to Nakuru in the dead of the night.

"Our client arrived in Nairobi on Sunday evening and got booked. He also recorded his statement and we were certain that he would be charged there," he said.

Mutuma said they were in instead told that he was being taken back to Nakuru where they arrived at midnight.

Mutuma said they were waiting for the police, Directorate of Criminal Investigations and the National Cohesion and Integration Commission (NCIC) to complete compiling Linturi's file.

His other lawyer Kennedy Echesa said the prosecution must present his client to court today (Monday) in accordance with the constitution.

"The prosecution has no option but present Linturi in court today or release him unconditionally," said Echesa.

He said the prosecution will have to charge or apply to hold him further pending investigations.

He said Linturi was likely to be charged with incitement to ethnic contempt.

"There is no reason why the court would allow further detention of our client because there is nothing to investigate," said Echesa.

-Edited by B. Marita.