The former Prime Minister said every Kenyan has a right to live anywhere in the country.

•Raila assured all Kenyans that they will be safe, regardless of where they live in the country.

•He added that every Kenyan will be protected by the government and no one should intimidate another because they are from a different tribe. 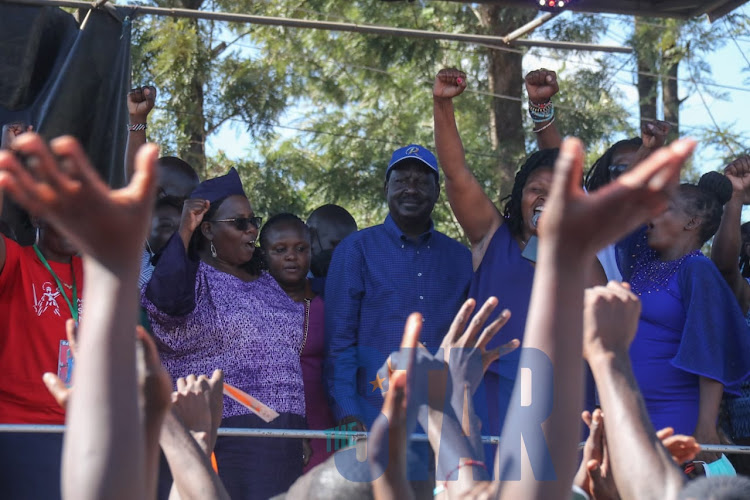 ODM leader Raila Odinga interacts with Kibiciku residents at Kibiciku grounds during a courtesy visit in honour of the mothers of political prisoners on Sunday, january 9, 2022.
Image: WILFRED NYANGARESI

Speaking at Kibiciku Grounds in Kabete, Kiambu county on Sunday, Raila assured all Kenyans that they will be safe, regardless of where they live in the country.

This loosely translates to, "We know the language of incitement. They were in Eldoret yesterday and talked about removing spots, I am daring them to try. I want to assure every Kenyan that they will be safe. Uhuru Muigai Kenyatta will not compromise and when it comes to Baba there's no joking."

The former Prime Minister said every Kenyan has a right to live anywhere in the country.

He added that every Kenyan will be protected by the government and no one should intimidate another because they are from a different tribe.

"Kikuyus have the right to live in Eldoret not because of pity, or at the mercy of another person, but as a Kenyan. A Luo will live in Nyeri and a Kikuyu in Homa Bay."

In an earlier address at ACK St. John Mwimuto where he attended a church service in memory of the wives of freedom fighters, Raila said that the country has made major strides to fight tribalism as he urged politicians to desist from divisive politics and instead preach peace and unity.

He noted that the country cannot afford to go back to 2007/08 post election violence saying that many Kenyans became internally displaced, a matter the he promised to address once he becomes the fifth president by making sure all IDPs are resettled.

Raila added that the infamous Nyayo House should be made a museum so that those who got involved in the second liberation of the country can be recognised and protected.

According to the DPP, Linturi's utterances could incite contempt, hatred, hostility, violence or discrimination.

"Pursuant to Article 157 (4) of the Constitution, I hereby direct that you immediately institute comprehensive investigations into the said allegation and submit the resultant investigations file on or before 14th January, 2022," Haji said.

The senator later apologised saying his ‘madoadoa' remarks on Saturday were not meant to incite or propagate hate speech.

“Today, while addressing the UDA rally at Eldoret, I expressed myself using words which in certain context, have acquired sinister political overtones and come to be associated with incitement and hate speech,” said the Senator.

“At that moment, I was vigorously urging our supporters to offer full support to UDA candidates in this year's election, and was oblivious of the possibility that my choice of words might assume negative meaning.”

He was however, arrested on Sunday by DCI detectives attached to the National Cohesion and Integration Commission over his remarks.