It's all systems go for Ruto's Eldoret mega rally on Saturday

Event will be for the region to bless Ruto and officially release him to vie for presidency.

• Sudi said the event will be for the region to bless Ruto and officially release him to vie for the presidency. 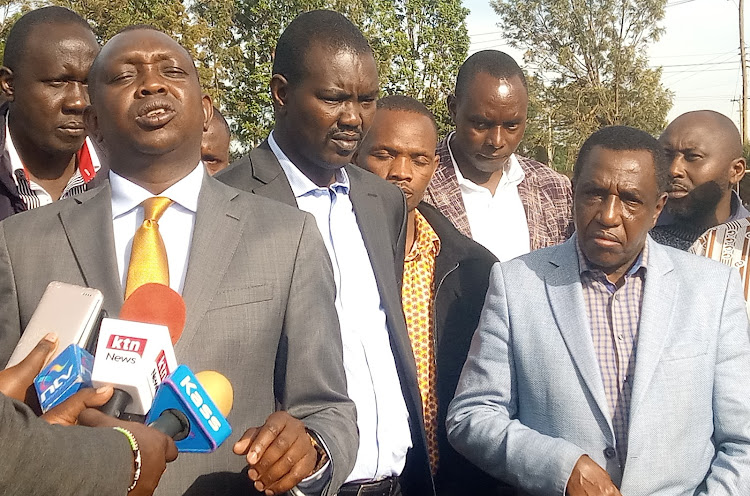 Speaking to the media on Friday, Sudi said the event will be for the region to bless Ruto and officially release him to vie for the presidency.

"In Kalenjin culture, when someone is going on a journey, there are things he is told and there is food he is given and that is the important thing tomorrow," he said.

"MPs who have confirmed attendance are over 80 but we expect the number to be 90. Governors will be here and Senators."

He went on to say that the meeting will be for the North Rift region and they have invited leaders from neighbouring counties of Baringo, Nandi, Elgeyo Marakwet and West Pokot.

The MP said that another rally will be held in the coming days in Nakuru.

Sudi called on the people of Uasin Gishu to turn out in large numbers for the rally.

"This is an exceptional year. It will be a year of blessings for our country Kenya. We have agreed as leaders that nothing supersedes peace," he said.

Bahati MP Kimani Ngunjiri said that the DP is the only one who is best placed to resuscitate the country's struggling economy.

"I have been in politics for 33 years, I'm not mad when I say he (Ruto) is the one who will revive the economy of Kenya," he said.

Ngunjiri added that the bottom-up economic model is best for Kenya and it will take care of everyone including the rich.

On Thursday, Mandago and Sudi called for a truce and met in Eldoret to plan for DP William Ruto's rally set for Saturday.