Says they want to pick a puppet as President to protect their wealth.

Deputy President William Ruto has said Kenyans will resist attempts to reintroduce an imperial presidency through the backdoor. https://bit.ly/3HFw9Gf DP William during his address to the people of Bulanda in Matayos, Murumba in Butula, Bukiri in Funyula and Budalangi — Busia County.
Image: DPPS

Deputy President William Ruto has said Kenyans will resist attempts to reintroduce an imperial presidency through the backdoor.

He said plans were being hatched by some individuals 'who think they can control Kenyans' to reintroduce the imperial presidency.

Speaking in various stopovers in Vihiga county on Thursday, Ruto said Kenyans voted overwhelmingly for the 2010 Constitution to among others, get rid of the imperial presidency.

"Some few rich people, out of arrogance think that they can sit in a certain hotel in Nairobi and appoint their puppet president to run the affairs of our nation and protect their interests and wealth," Ruto said.

He said Kenyans were more enlightened than before and they want a government that can transform their lives.

"Kenyans are eager and willing to vote for leaders who have plans and agenda that can transform the lives of ordinary people, who form the majority population of this country," DP said.

"The reality is that voters want a servant president who will listen to them and solve their problems, unlike a puppet one who will worship and bow down to his masters.”

He noted that Kenyans in their millions will elect their president who is going to serve them equally besides creating wealth and opportunities for them.

The DP said that the Bottom-Up economic model is being embraced across the globe, saying that US President Joe Biden is a proponent of the same model.

"Even the United States has accepted that the Bottom-Up economic model because it aims at transforming lives of ordinary citizens as opposed to the trickle-down one that only benefits a few people at the top,” he said. 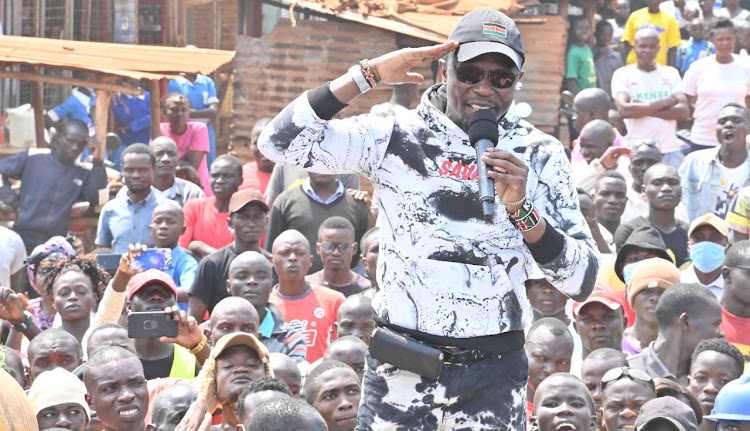 He said 80 per cent of Kenyans who thrive on Small and Medium Enterprises will be the biggest beneficiaries of the Bottom-Up economic model.

Also, Ruto again extended an invite to OKA leaders Musalia Mudavadi and Moses Wetang'ula to join forces with him ahead of the August elections.

Hamisi MP Charles Gimose urged Ruto to team up with the two leaders, saying it was the wish of the locals.

"Our people in Vihiga are confident that you are the right choice for the presidency. They are, however, urging you to bring onboard our brothers Musalia and Wetangula," Gimose said.

Further, the DP told his competitors to stop forming small tribal political parties to divide Kenyans ahead of the August general election.

He wondered why the opposition leaders were retreating to their tribes by forming regional parties at the expense of embracing democracy.

Ruto said all the schemes his competitors were employing against him would be defeated by Kenyans.

He said voters were not interested in propaganda and rhetoric but policies and ideologies that would transform their lives.

"My competitors are retreating to regional parties because they have no development agenda for the country. I urge voters to reject them at the ballot.”.

Ruto to business tycoons: Stop boardroom schemes, Kenyans will elect their next President

The DP said it is Kenyans who will choose their next leader.
News
3 weeks ago
by KEVIN CHERUIYOT Online Journalist
News
06 January 2022 - 15:48