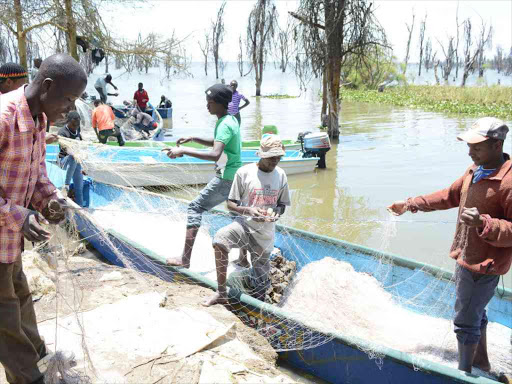 None of the informal settlements around Lake Naivasha have a functional sewer system leading to massive pollution of the water body.

Residents use latrines which flood whenever it rains with the waste washed into the lake.

Informal settlements around the lake include Kihoto, Karagita, Kamere, Manera, DCK and Tarambeta which are home to hundreds of flower farm workers.

Lake Naivasha Water Resource Users Association chairman Enock Kiminta says none of the estates around the lake has a sewer system.

Kiminta said this was worsened by the flooding of some estates early last year.

“The lake is heavily polluted mainly from the informal settlements that rely on latrines and flash floods from Naivasha town whenever it rains,” he said.

The chairman added that detergents were also finding their way into River Malewa as women wash their clothes daily.

He said the detergents were lowering the surface tension of the water.

“We have seen tens of women washing clothes along River Malewa. This makes it hard for aquatic insects to float on the surface,” he said.

Research has proven that detergents bind up oxygen to form bubbles which could starve fish and other insects off oxygen.

“It’s time these communities were provided with alternative washing areas away from the river bank as their actions continue to threaten the fresh water lake,” he said.

Lake Naivasha Basin Landscape Association chairman Paul Ruoya says there is urgent need to address the issue of sanitation around the industrial park in Mai Mahiu.

He said the issue of water and sewerage treatment would be critical.

The chairman said they were keen to partner with the national and county governments in the project.

“A lot of water will be used in the industrial park and we are keen on how it will be treated so that the waste doesn’t end up finding its way into the lake,” he said.

Some 42 factories have fully complied with putting up effluent treatment plants.
Counties
5 months ago

Oceans are getting warmer by the day, affecting some marine species
News - Page 9
5 months ago
by ANTHONY GITONGA
News
06 January 2022 - 23:00