Evicted residents in city slum to be resettled in new drive

Thousands of people were left homeless in the eviction.

• This follows a directive by President Uhuru Kenyatta that the victims be resettled.

• This was in regard to a court order that allowed the eviction of the victims from private land in the area.

Hundreds of residents who were recently evicted from their houses in Mukuru Kwa Njenga slums will be resettled. https://bit.ly/3n2apMR 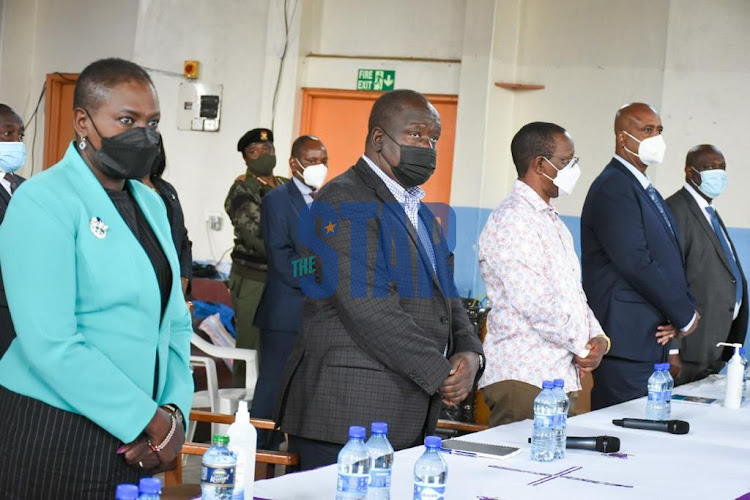 Hundreds of residents who were recently evicted from their houses in Mukuru Kwa Njenga slums will be resettled.

This follows a directive by President Uhuru Kenyatta that the victims be resettled.

Cabinet Secretaries Fred Matiangi (Interior) and Farida Karoney (Lands) met some of the victims Thursday in South B’s Mariakani Christian Centre and pledged to always look into the welfare of the majority as opposed to few.

This was in regard to a court order that allowed the eviction of the victims from private land in the area.

Thousands of people were left homeless in the eviction which attracted the attention of the president.

They held a consultative meeting with Mukuru Kwa Njenga elders before agreeing on the way forward.

Karoney said they will probably within a month document those on the land in question, consult the occupants and the owner, audit documents available and agree before settling the victims.

“We are going to work with the community in order to regularise the settlement and also the landowner who has the title deed,” she said.

Matiangi said the challenge in the slum is complex but the president is determined to find a lasting solution.

“We have to strike a balance between human rights and ownership of property. We have hopes of settling this issue,” he said.

As the meeting went on a group converged out there complaining they were the genuine slum leaders but had been locked out.

Area MP Mawathe Musili and former MP Irshad Sumura were among those who were barred from getting into the meeting.

“Those inside there are not leaders. They are the rich owners of land yet the victims are here,” said Mawathe.

He said some people took advantage of the construction of a road in the slum to extend the demolition of structures further into the slum displacing thousands.

Matiang’i addressed the group outside the venue of the meeting and promised to address their grievances before leaving.

He said the meeting was aimed at solving a tussle over land ownership in the slum.

President Kenyatta visited the slum on December 27 at night and met the affected persons who told him some people in his government had grabbed the land and allocated themselves after evicting them.

One person was shot dead and six others were injured in a clash with police.

Two senior police officers have been suspended to pave way for investigations into the saga.

The investigations are conducted by the National Police Service’s Internal Affairs Unit (IAU) and other human rights organisations.

The investigators have received minutes of meetings that ratified the deployment of police and been informed top police commanders were aware of the eviction.

Demolitions in Mukuru started on October 12, 2021, where residents living along road reserves on Catherine Ndereba Road were asked to vacate with immediate effect as the government commenced demolitions to pave way for construction of the Nairobi Expressway.

The affected area will pave way for the construction and expansion of Catherine Ndereba Road.

But officials extended the eviction to a private land there based on a court order amid resistance from those targeted.

Human rights organizations vowed to institute charges against those involved in the chaos.