Why 2022 could be litmus test to country’s education future

The year will have four terms, two KCPE exams, two KCSE exams, and an assessment for the pioneer CBC class 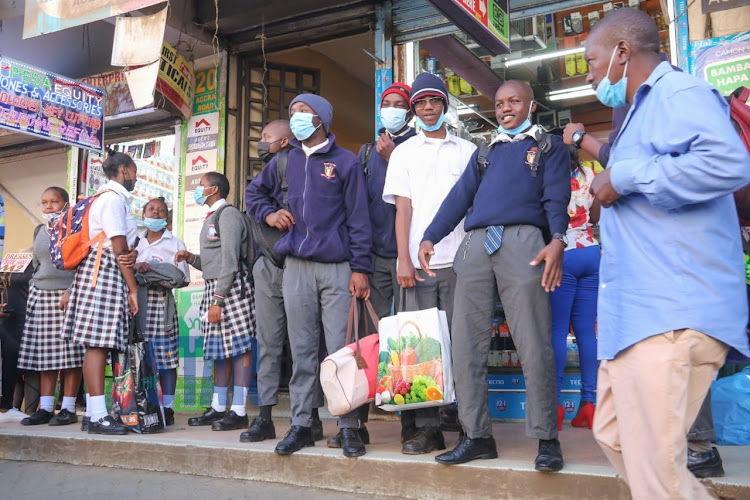 students at Karatina stage in Tearoom in Nairobi on January 4, 2022
Image: WILFRED NYANGARESI

The reopening of schools will mark the beginning of the end of a plan to recover time lost during the shutdown of learning institutions to stem the spread of Covid-19.

The ripple effects of the closure have seen, for the second year in a row, schools reopening outside the traditional January-December cycle.

The year will have four terms, two KCPE exams, two KCSE exams, and an assessment —equal to KCPE—for the pioneer class of the competency-based curriculum.

Education Cabinet Secretary George Magoha in December termed the examinations a litmus test to the regulations set to curb cheating in 2016.

“This coming year shall test whether the transformation we have done at Kenya National Examination Council is sustainable or not,” he said while launching Knec’s strategic framework 2021-26.

The year begins with the resumption of third term, with most learners expected to troop back to school on Tuesday and Wednesday.

It is expected that, by the end of 2022, all the time lost during the school closure will have been recovered and come January 2023, the academic calendar will have gone back to normal.

The tests include KCPE and KCSE exam for the 2021 class between March and April 2022.

The second set of exams will be conducted in December and will involve KCPE and KCSE  class of 2022, and the final assessment for the pioneer Class of the new curriculum that will be completing Grade 6.

The revised academic calendar released in 2019 spells that the 2021 KCPE exams be written between March 7 and March 10, while KCSE will be conducted between March 11 and April 1.

Marking and release of the results will be done for three weeks from April 4 to 22.

Upon completion, schools will prepare for the reopening of the 2022 academic calendar.

It will be the shortest academic calendar in the history of the country spanning 29 weeks in contrast to the normal 38 weeks.

In essence, it will mean schools will lose about nine weeks and the ripple effects could see a rush by teachers to cover the syllabus.

Second term will run between July 11 and September 16, while third term is slated for September 26 to November 25.

Those in Standard 7 and Form 3 will sit their KCPE, KCSE examinations between November and December.

During the same period, primary schools will administer the national assessment for the pioneer cohort of the competency-based curriculum.

This year will also be the hallmark for preparation for rollout of the CBC to junior secondary school.

The pioneer class of the CBC will join Junior secondary school in 2023.

In the first year of CBC joining junior secondary, approximately 1.3 million learners enrolled in Grade 4 last year will transit to junior secondary school (Grade 7) as the first cohort of the 2-6-6-3 system in 2023.

As it is, the secondary school infrastructure can accommodate up to 1.1 million students.

This means, should the government fail to expand the school infrastructure, 1.5 million students will not have a place in secondary school upon either completing Standard 8 or 6 under the new curriculum.

The anticipated enrolment will further push upwards the demand for laboratories, libraries, washrooms, boarding facilities and other education-related facilities.

During the Mashujaa Day celebration, President Uhuru Kenyatta directed the allocation of Sh8 billion to support the construction of 10,000 additional classrooms to support a double transition.

However, given the report that one class is estimated to accommodate 50 learners, it means the 10,000 classes to be constructed will accommodate only 500,000 students, leaving a deficit of close to one million.

The term is set to run for nine weeks to March 4 with no midterm break; the shortest term yet.
News
7 months ago

This will act as a litmus test on the reform's put in place to curb cheating
News
7 months ago
by LEWIS NYAUNDI Education Reporter
News
05 January 2022 - 05:00