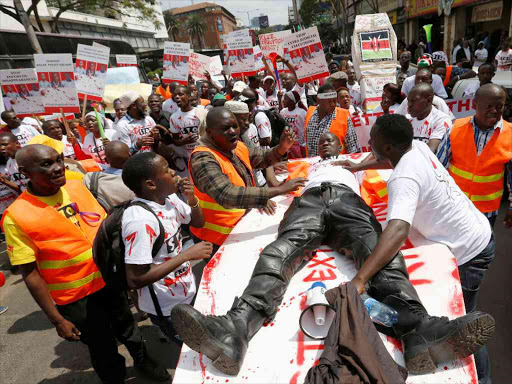 Some 114 people were either killed or endured torture at the hands of the cops in 2021, the latest report by human rights lobby that monitors police operations shows.

Independent Medico-Legal Unit’s new report shows some 87 people were allegedly “extra-judicially, summarily and arbitrarily executed” by  the police, while 27 people were tortured.

This, the lobby says, was the worst data they have recorded since 2010, when the current Constitution came into force.

They also recorded some 84 cases of alleged police malfeasance, including what they characterised as cruel, inhuman or degrading treatment and punishment. It also recorded two cases of enforced disappearance.

In the statistics, men are the majority of the alleged cases of summary killing, cruel inhuman treatment and enforced disappearances.

“Men are most likely to be victims of state perpetrated human rights violations accounting for 82.8 per cent of the torture, cruel inhuman and degrading treatment, enforced disappearance and extrajudicial executions,” Imlu executive director Peter Kiama said in a statement.

Of the total 198 alleged cases, the group said a majority of 156 cases were attributable to officers from general duty Kenya Police, three were committed by chiefs and or assistant chiefs, one by a KWS officer and military officers, among other security agents.

Imlu said from its analysis, the spread of the cases in the country rules out a case of few rotten apples but rather “a national, widespread, and systemic problem, not a case of a few rogue officers or stations.”

“These violations happened within the jurisdiction of 84 police stations and 32 counties.”

Nairobi accounts for the majority of the cases ahead of Embu and Kisumu.

“Embu has been a surprise county registering many violations during the reporting period,” it said.

The lobby said that most of the violations it recorded were committed by officers enforcing Covid-19 protocols, including wearing of masks and the dusk to dawn curfew.

The lobby raised the red flag on the rising cases of abductions, enforced disappearances, tortures and executions, which it claims, have become policing tools.

“One notable and worrying trend is the emergence of abductions, enforced disappearance, torture and executions in multi-agency operations, including the Laikipia and Baringo operations,” it said.

In Baringo, it said, some 15 people were allegedly abducted with 11 of those found tortured and killed. Five are still missing.

Two of those tortured and killed were middle-level public servants, it said.

But police dispute the data constantly produced by lobby group, accusing it of excesses, complaining that the entities never shared the findings with it.

The numbers show a steep rise in the alleged extra-judicial killings and enforced disappearances.
News
10 months ago

50 charged in 2021 as Ipoa battles epidemic of killer cops

Offenses ranged from harassing members of the public, brutality to enforced disappearances and extrajudicial killings.
News
10 months ago

Crime busters kicked open Mburia's door and dragged him, literally, to his death.
News
11 months ago

They had staged protest in Nairobi against cases of disappearances to demand state action
News
1 year ago
Post a comment
WATCH: The latest videos from the Star
by GORDON OSEN News Journalist
News
04 January 2022 - 05:00
Read The E-Paper