The initiative happened under the guidance of President Uhuru Kenyatta.

•Efforts to combat the disease received a major boost with the approval of the first-ever malaria vaccine.

•The vaccine was approved for widespread use by WHO in October 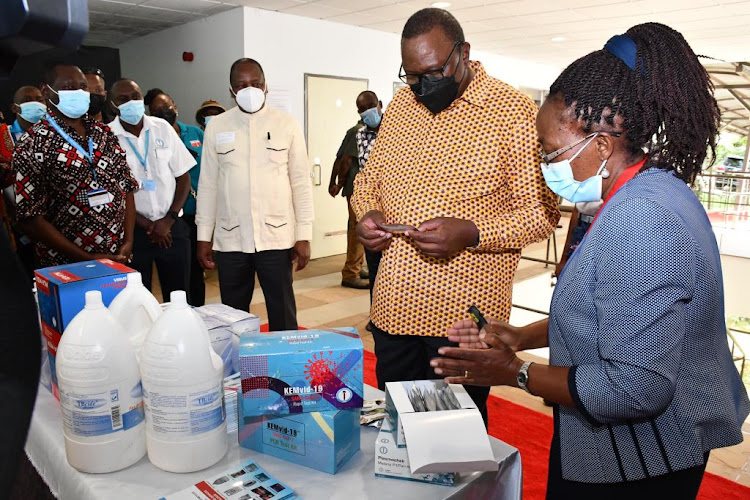 Malaria is a major public health problem in Kenya.

Due to altitude, rainfall patterns and temperature, about 70 per cent of the Kenyan population is at risk for malaria.

The government has in the past years renewed efforts in ensuring the disease burden is reduced, including mass drug administration and distribution of mosquito treated mosquito nets in the endemic counties, mainly in the westerns and Nyanza regions.

But the effort to combat the disease received a major boost with the approval of the first-ever malaria vaccine.

The vaccine was approved for widespread use by WHO in October.

Patent owner GlaxoSmithKline had donated 10 million doses of the vaccine for the just-ended pilot programmes in Kenya, Malawi and Ghana.

The pilots were supported by other partners including Path, Unicef, Bill and Melinda Gates Foundation and the World Health Organization.

The WHO recently recommended widespread use of the RTS,S/AS01 (RTS,S) malaria vaccine among children in sub-Saharan Africa and in other regions with moderate to high malaria transmission.

The vaccine was formally launched in Kenya on September 13, 2019, in Ndhiwa, Homa Bay.

The plan by the Health ministry is to roll out the vaccine to the rest of the counties in the coming months.

Ministry data show that 533 health facilities are currently administering the vaccine across the country.

“In the coming days, the Ministry of Health will consult with experts and advisory bodies to make considerations on the expanded use of the Malaria vaccine in other parts of the country, taking note of in-country morbidity data and regulatory provisions,” Health DG Patrcik Amoth said.

“Demand for the vaccine has remained high amid an influx of individuals from non-vaccinating counties, with coverage of the first dose recording over 70 per cent,” the CS noted.

The vaccine is to be administered in a schedule of four doses—the age of six months for the first dose, seven months for the second dose, the third dose at nine months and the fourth at two years.

According to WHO, 94 per cent of malaria cases and deaths occur in Africa, a continent of 1.3 billion people. This preventable disease is caused by parasites transmitted to people by the bites of infected mosquitoes. Its symptoms include fever, vomiting and fatigue.

Under-fives are at most risk of hospital admission and mortality due to malaria. The disease is also a major cause of severe anaemia in children.

Since 2019, some 2.3 million doses of Mosquirix have been administered to infants in Ghana, Kenya and Malawi in a large-scale pilot programme coordinated by the WHO.

Similarly, Kenya this year launched Kenya the use of drones to map out mosquito breeding sites in a renewed effort to curb malaria.

Drone technology was among several new initiatives launched on by the Health ministry during the Malaria Action Day celebrations in Mutondia, Kilifi county.

The initiative happened under the guidance of President Uhuru Kenyatta.

The President is the chair of the African Leaders Malaria Alliance through the Kenya Cuba Malaria Vector Control Project.

The drones will help in accessing hard-to-reach areas and cover expansive breeding sites such as the Kano plains in Kisumu or around the Mwea irrigation scheme in Kirinyaga.

“We are focused on larviciding so that we kill the mosquitoes before they breed,” Kagwe said.

The President launched the Kenya Malaria Youth Army, which seeks to have the youth play a central role in malaria control activities.

It is part of a social movement to fight malaria, improve maternal and child health, and expand access to universal health care.

Kenya is also providing leadership to the ALMA community on the use of score cards to report on the progress in Malaria eradication.

This is done through sharing of the national experience scorecard on the ALMA digital hub for other countries to learn.

Rose Jalang'o, who helped Kenya to coordinate the pilot programme, said the ministry was waiting for global guidance on how the vaccine will be financed as part of the national immunisation programme.

“It is not going to be easy for many countries in Africa to access, so the very first consideration is how we fund and ensure that there is access to this good vaccine,” Akhwale said.

“This vaccine is going to save the lives of young people in this country because it prevents severe disease. Just like in Covid-19, you have seen the vaccines prevent severe disease in malaria.

A study in which Dr Jalang'o participated this year estimated it would cost about Sh700 per dose, excluding costs of the rollout.

It would cost about Sh3,000 to roll out the four doses required, excluding other attendant costs.