Statistics from the first-ever national wildlife census will be used in decision-making.

• Kiiru said the country has an agreement on roan antelopes. Under the agreement, Kenya will move two female black rhinos to Tanzania.

• In return, Tanzania will give the country 20 roan antelopes. 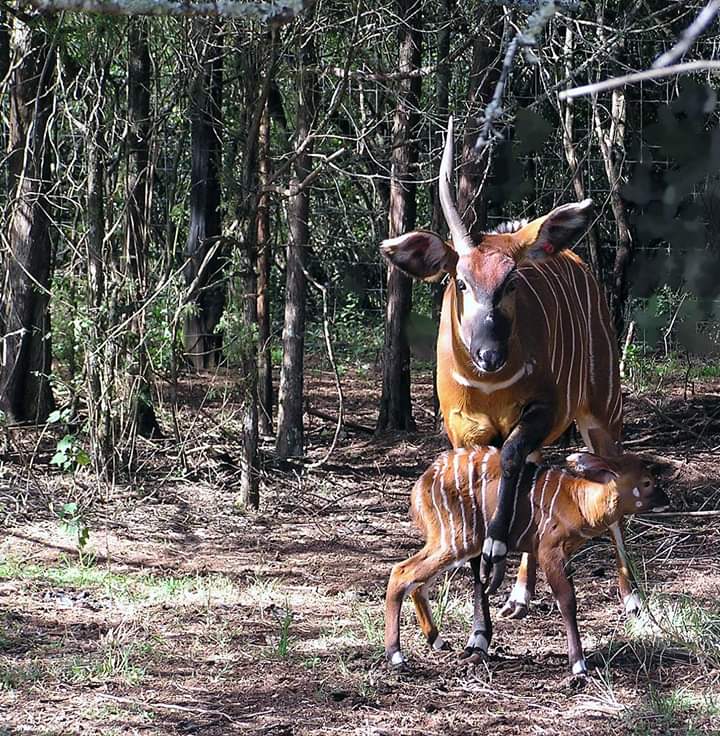 A mountain bongo and her calf at a sanctuary in Mount Kenya Image: MOUNT KENYA WILDLIFE CONSERVANCY

The Wildlife Research and Training Institute has announced recovery plans for animal species that are almost going extinct.

Institute chairperson Winnie Kiiru told the Star they will focus on rare antelopes such as sitatunga, hirola, roan and zebu whose numbers have declined.

She said the statistics from the national wildlife census will be used in decision-making.

“At the moment, our focus is on ensuring that we increase the numbers of these animals and improve the genetic pool. We are talking to scientists around the world,” Kiiru told the Star on Wednesday.

The census report that was unveiled on August 30 revealed that Kenya's charismatic species such as elephants, rhinos, lions, giraffe, Grevy’s zebra and hirola had increased.

Kiiru said the country has an agreement on roan antelopes.

Under the agreement, Kenya will move two female black rhinos to Tanzania.

In return, Tanzania will give the country 20 roan antelopes.

Kiiru said the move will help the two countries improve the genetic pool of the two wildlife species.

A gene pool is the total genetic diversity found within a population of a species, according to the National Human Genome Research Institute.

A large gene pool has extensive genetic diversity and is better able to withstand the challenges posed by environmental stresses. Inbreeding contributes to the creation of a small gene pool and makes populations or species more likely to go extinct when faced with some type of stress.

“These exchanges are important for us because we have to improve the genetic pool of these antelopes to give them a chance to recover. We will continue to study the others, hirola, zebu and sitatunga, and make sure that we collaborate with other scientists,” Kiiru said.

She said statistics from the census will help to make informed decisions.

“The numbers and distribution will help us to argue our case that there are certain areas that need to be secured purely for our wildlife,” Kiiru said.

He said other species set for recovery include the mountain bongo, which is found in Aberdares, Mount Kenya and Eburu forest.

Omondi said researchers from his institute have been roped into a consortium of scientists attempting to save the northern white rhinos from extinction through advanced assisted reproduction technologies.

Najin was born in Safari Park Dvůr Králové (Czech Republic) in 1989 and was moved to Ol Pejeta Conservancy (Kenya) along with three other northern white rhinos in 2009 for a natural breeding programme.

Five years later, scientists established that the last chance to survive for Najin and her kind lies in advanced techniques of assisted reproduction conducted by the BioRescue consortium.

Omondi said the institute will also be focused on reversing the challenges facing vultures as well as black rhinos.

“We will monitor population structure, births and deaths,” he said.

Omondi urged donors to help provide funds to complement what the national government will provide.

The MoU establishes cooperation parameters for both parties, in the realm of conservation science, wildlife health, care and welfare.

“The San Diego Zoo Wildlife Alliance has a strong science wing and laboratory facilities that will help our only captive facilities in the country,” Omondi said.

Estimates indicate there could be about 150 individuals.
News
1 year ago

Translocation builds population in one area, reducing pressure in other ecosystems.
Counties
2 years ago
Post a comment
WATCH: The latest videos from the Star
by GILBERT KOECH News Reporter
News
23 December 2021 - 23:00
Read The E-Paper