Parts of Rift Valley, Western and Marsabit have emerged as areas with increased potential for radicalisation and recruitment

•While this trend began in 2009, in recent years it has been part of an adaptation strategy by the violent extremists to escape increased scrutiny of their activities by security agencies.

•The report showed that Islamist radicalisation and recruitment in new areas of violent extremism is primarily taking place in mosques, madrassas and schools. 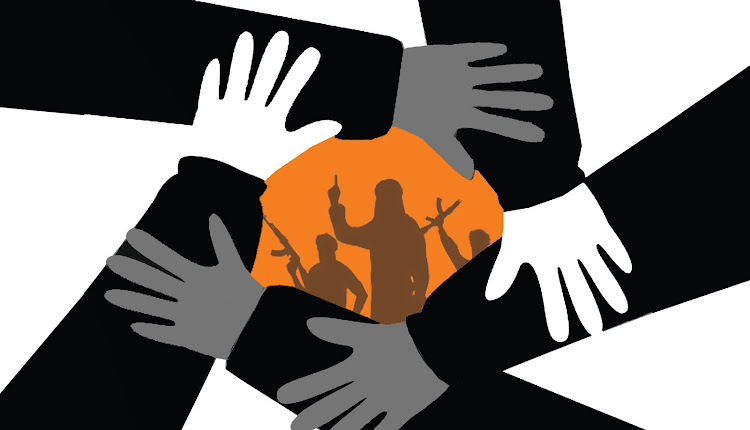 Lack of community cohesion, information sharing, poverty and attachment to a place increase the risk of violent extremism, a report has shown.

According to a 2021 report by Reinvent-Kenya, parts of Rift Valley, Western and Marsabit have emerged as new violent extremism hotspots with increased potential for radicalisation and recruitment.

The study assessed the risk and vulnerability in Nakuru, Eldoret and its environs in Rift Valley, Kakamega, Busia, Siaya, Bungoma and Mumias and Marsabit.

According to the survey, radicalisation and recruitment has been taking place in areas outside the Kenyan coast, North Eastern and parts of Nairobi for over a decade.

While this trend began in 2009, in recent years it has been part of an adaptation strategy by the violent extremists to escape increased scrutiny of their activities by security agencies.

Though these selected were domiciled in Muslim dominated locations, a UN report demonstrated that the problem was not a Kenyan Somali, Swahili or Arab phenomenon and that Kenyans from predominantly Christian ethnic communities were involved.

The report showed that Islamist radicalisation and recruitment in new areas of violent extremism is primarily taking place in mosques, madrassas and schools.

“These institutions normally provide violent extremism operators and actors with the necessary platforms for radicalisation (in particular, dissemination of newsletters, the issuance of radical sermons, and the broadcasting of DVDs featuring speeches of radical and extremist preachers)and provide the networks and resources required for travel to Somalia and beyond for military training,” the report says.

Due to the sensitivity and relative information regarding the activities, the report does not offer precise figures on the extent of violent extremism activities in the study locations.

The study showed the threat in Marsabit has been associated with members and followers of the defunct Marsabit Da’wah Group.

The group expanded its influence in Marsabit town between 2009 and 2012, through the Pastoral Preaching Initiative and through the publication of pamphlets that were distributed in the town expressing support for militant jihad and al Shabaab.

The report showed the PPI programme organised visitations by religious clerics to schools, mosques and madrassas where they offered religious classes and seminars.

“Despite reduced communal vulnerability given the presence in the local community in Marsabit of features that have been assumed to enable a community to act against violent extremism, the county continues to face a threat,”  the report shows.

This, the researchers said is actors and holders of extremist views in the county have constructed covert channels of communication, radicalisation and recruitment.

“The fact that some of those who have been associated with the county’s violent extremism network are still at large has concerned some respondents who are fearful of the possibility of continued radicalisation and recruitment activities in the area,” it reads.

Similar to Marsabit, they found that violent extremists in Eldoret and other parts of Uasin Gishu were often found to have alienated themselves from wider society.

What is different, however, is that those in Eldoret have not attempted to stake a claim in local politics, or to control the town’s existing Islamic institutions.

“The nature of violent extremism radicalisation and recruitment in Eldoret and other parts of Uasin Gishu suggest that actors in this location have either established their own places of worship (without attempting to take over existing ones) or are working through other covert infrastructures of recruitment, fundraising and communication,  involving the use of online platforms,” reads the report. 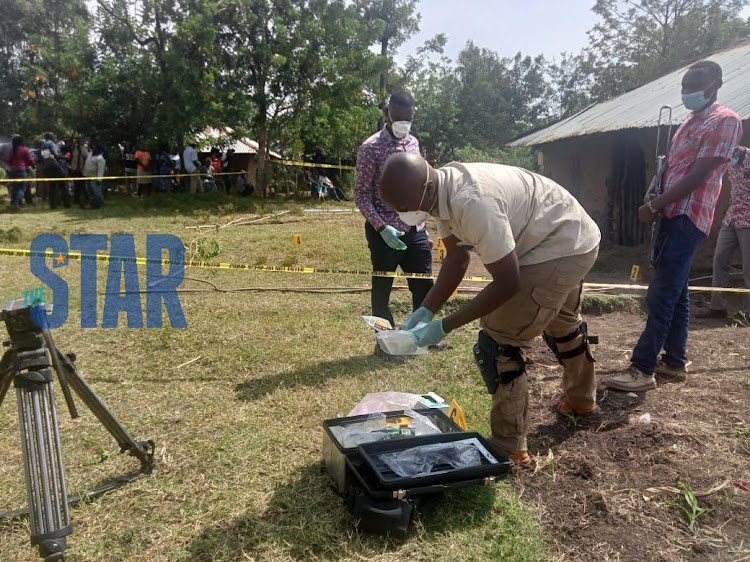 Anti Terror Police unit examines a scene of crime where a suspect used a suicide bomb to kill a man and his wife at Kamloma Village in Agoro, Nyakach Sub-County on December 8, 2021
Image: Daniel Ogendo

Such was the case with the radicalisation and recruitment into al Shabaab of Jared Mokaya Omambia, alias Abdulaziz, who joined the group in 2014 and was killed by the group in Somalia in June 2016 on suspicion that he was spying on behalf of the Kenyan security agencies.

Jared was born in Cheptiret in Uasin Gishu and is believed to have converted to Islam in 2013 in Isebania, Migori, where he had gone to look for work after graduating with an Information Technology degree from Moi University.

It was while in Isebania that he was arrested for referring to a group of non-Muslims as “Kafir”, a derogatory term for non-Muslims.

He was released on Sh10,000 cash bail, after which he travelled to Somalia to join al Shabaab.

“Although Jared converted and was radicalised away from his parent’s home in Uasin Gishu, the Cheptiret and nearby Kesses areas were repeatedly mentioned by respondents as areas of concern for violent extremism, radicalisation and recruitment activities, due to their proximity, respondents said, to Moi University,” reads part of the report.

The report showed Eldoret and the wider Uasin Gishu represent a case of strong communal capacity to disrupt extremism networks.

However, poor inter-religious relations, lack of open discussions regarding the threat of violent extremism and misconceptions regarding it have led to a situation where the drivers of extremism are not adequately addressed.

“All these are major factors that influence the community’s level of social capital and information sharing,”  the report said.

Several isolated cases of arrests of individuals suspected of being involved in such activities and who are thought to have come from Nakuru have recently brought the county under spotlight.

This study paid attention to what some respondents felt was the rise in Nakuru of puritanical ideological leanings amongst a group of local Muslims associated with the local Tabligh Aklu-Sunna.

“Individuals associated with this Tablighi chapter – or those professing its Salafist doctrine – have reportedly become executive members of the Muslim Association of Nakuru,” reads the report.

“They have sponsored the building of new mosques, such as Nakuru’s Al-Rahma mosque and promoted a more aggressive Islamic propagation programme, including installing their preferred imams, especially Imam Ahmed Rashid, to preach at the town’s main mosque, Masjid Jamia.”

The report showed members of the association are divided along ideological lines, that is, between those leaning to Sufist-Tariqa forms of Islamic belief and practice, and those who have recently come to profess reformist-Salafist doctrines.

Despite these incidents, the most drew the most concerning indications that violent extremism radicalisation and recruitment is a problem in Nakuru was that of one Javan Morton Murai, alias Jamal.

Murai who came from Vihiga was arrested on June 11, 2016, by KWS and AP officers at a borehole in the Jaldesa Community Conversancy in Marsabit, on suspicion that he was on his way to Somalia to join his colleagues who had been recruited by al Shabaab.

A final year Law student at Kabarak University and a rugby player with Nakuru RFC had converted to Islam in Nakuru where he lived with his brother while attending university.

“Nakuru, with no historically significant cases of VE radicalization and recruitment, nonetheless possesses significant vulnerabilities that could conceivably be exploited by VE actors,” the report showed.

In Western, the study showed that the Busia-Siaya-Bungoma geographical nexus has provided an area of operation for a covert violent extremism network spread around several small mosques that have alienated themselves from the wider Muslim population.

The network seemingly has direct networks of communication and recruitment with al Shabaab figures based on the Kenya coast and Somalia. 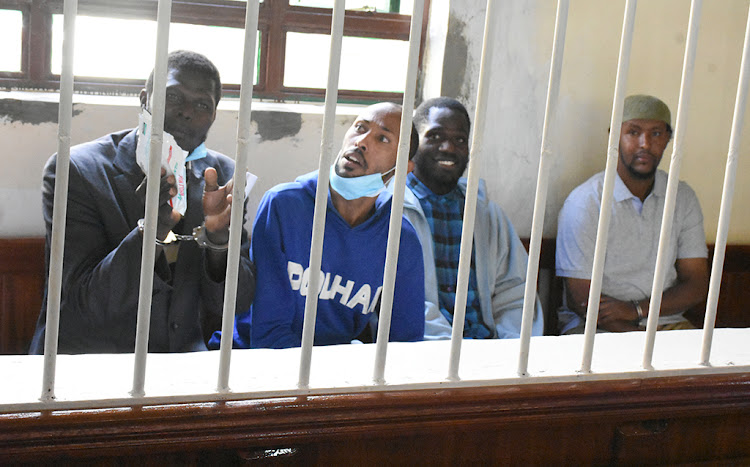 According to respondents, Mumias represents a rather different trend, where violent extremists have long attempted to make their presence felt in local Muslim politics. Of particular note is Masjid Fulqan at Lukoye in Mumias.

Juma Odhiambo who was recently recaptured after he and two others escaped from Kamiti prison was linked to the mosque.

Musharraf Abdalla Akhulunga who escaped with him comes from Ekero in Mumias, where a mosque was closed down after children attending madrassa lectures relayed the extremist teachings they were receiving to their parents.

“Most networks in the region now operate underground. This could be a problem swept under the carpet,” the report showed.

The report showed that Counter-Terrorism programmes should not only be context-specific but should work in tandem with communities and other developmental efforts.

“Appropriate strategies are required for each location. Approaches need to be more attuned to the specific nature of risk and vulnerability within their jurisdictions, as opposed to the production of largely vague and generic plans,” recommends the report.

It recommended sensitisation programmes targeting law enforcers, policymakers and the public on the complex nature of violent extremism in these locations.

“This is because violent extremism includes a host of other political, cultural, societal and religious factors, and is not purely driven by strict criminal motivations, or other instrumental and financial factors,” the report showed.

Post a comment
WATCH: The latest videos from the Star
by Akello Odenyo Court Reporter
News
23 December 2021 - 23:00
Read The E-Paper