Number of Kenyan governors serving their final terms stands at 21. 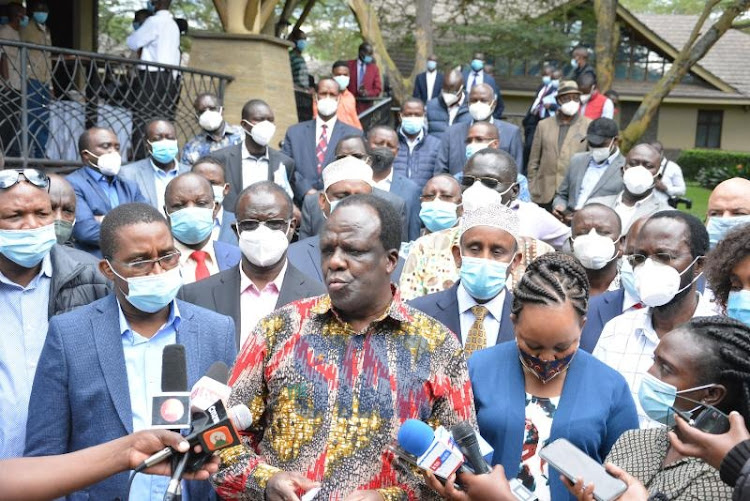 The political temperatures in Kenya are rising by the day; many are presenting themselves for election in different capacities and there are those who are in their final terms and now want to go for seats higher than those they currently hold.

Currently, the number of Kenyan governors serving their final terms stands at 21 and out of these, only five have expressed interest in going for the country’s top seat.

This comes even as many of these governors have opted to support other candidates for the presidency.

Mwangi wa Iria is the first governor of Murang’a county and is serving his final term as head of the county in Central Kenya.

As early as January 2020, the governor had declared that he would seek the country’s top job but had not clearly stated on which party. Wa Iria was elected on a Jubilee ticket.

He had initially said he would vie for presidency on the Civic Renewal Party (CRP) but as time went by, that changed and he has since been popularising Usawa Kwa Wote party, which he launched in August 2021 as his presidential bid party.

He has been running advertisements on national television as part of popularising the party and has been holding rallies for the same around the Mount Kenya region.

Wa Iria banks on his development record and experience as what qualifies him to be the next President of Kenya.

He is expected to launch his manifesto in January 2022.

Machakos Governor Alfred Mutua has also maintained his stance that he will be on the ballot in 2022 as he seeks to be the next president. This comes despite showing support for ODM leader Raila Odinga’s Azimio la Umoja.

Of all the final term governors seeking the top seat, only Mutua has gone a step further to launch his manifesto and what he plans to do for Kenyans if elected president. He will seek the country’s top job through his Maendeleo Chap Chap (MCC) party.

While launching his Presidential manifesto at Panafric hotel in Nairobi, Mutua promised to lower the cost of food, internet, phone call charges and electricity which will be top on his priority list.

He promised to create five million new jobs for them in the first three years of his presidency, as well as giving tax breaks to companies.

What however, caught the attention of most people was the soft offering of Sh500,000 to Sh1 million to newlyweds which they will pay back in up to 20 years.

The governor said his government will be driven by 13-point pillars which include; quality of life, youth agenda, manufacturing, free healthcare for all, security, integrity and accountability, education, infrastructure, social welfare, sports and tourism, ease of doing business, foreign affairs, and environment.

Deemed a darling to many, owing to his record as Makueni county boss, Kivutha Kibwana has presented himself for the presidency. A few weeks ago he called on Kenyans to join and support his bid, through the Muungano party which he plans to use in seeking the country’s top job.

Kibwana recently called on Kenyans to campaign for him by word of mouth, saying that he belives he can redeem Kenya from many of the challenges the country is facing.

“Kenyans I beseech you to campaign for me by Word of Mouth. I believe we can redeem Kenya from endemic corruption, tribalism, impunity, youth neglect, under-development, poverty, etc. I lack billions for the campaign, but you are able to raise resources for the change we deserve,” he said.

“#Elections2022 It is said the 2022 general election is a two horse Raila-Ruto race with an OKA mule and several donkeys on the track. As a presidential aspirant, I accept the tag of a donkey. Jesus Christ, the ultimate servant leader, rode on a donkey to face his epoch trial.”

Other final term governors who have public declared their interests in the country’s top seat include Mombasa’s Hassan Joho and Kakamega’s Wycliffe Oparanya.

The two had initially expressed interest in succeeding ODM leader Raila Odinga and had even paid for their nomination bids but later abandoned their bids saying that they want to give their boss (Raila) a final chance to try his luck at the country’s top job.

Joho who had started positioning himself for the top seat as early as 2018 said in October that after some soul searching, he realises his party leader remains the man to beat thus his reason for dropping his bid to support him. He noted that in 2027, he will be ready to succeed the ODM boss.

In June this year, Oparanya had hinted that he would drop his bid, if the ODM leader declared he would vie for presidency.

“If Raila decided to run for the presidency then I will not oppose him,” he said, adding that he would instead consult him on which position to vie for in the 2022 general elections.

About 30 governors are believed to be backing the ODM boss to succeed President Uhuru Kenyatta as he retires next year.

Raila launched his presidential bid as well as the Azimio la Umoja movement on December 10 at the Kasarani stadium.

The movement is expected to be the coalition name the ODM boss will use in his fifth stab at the country’s top job.

His ability to put the interest of the nation above his has earned him a position above his peers
Siasa
9 months ago
Post a comment
WATCH: The latest videos from the Star
by BRIAN ORUTA Digital Journalist
News
20 December 2021 - 13:00
Read The E-Paper