The deal is aimed at forming a third force against Raila and Ruto. 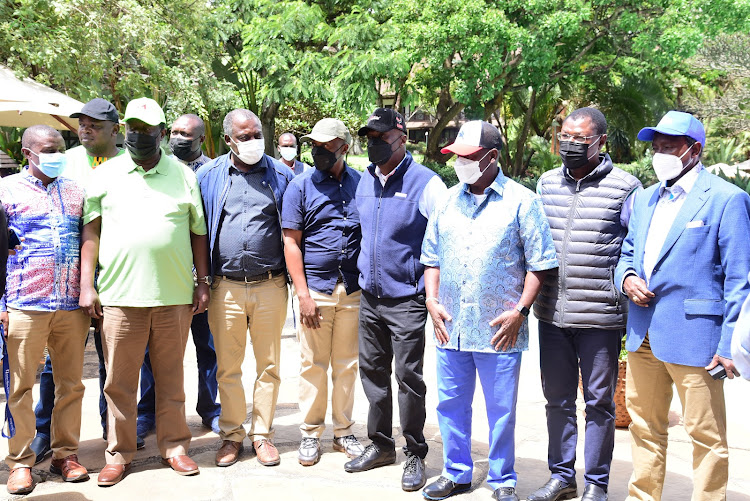 One Kenya Alliance chiefs on Sunday signed an agreement to work with a section of Mount Kenya leaders, tipping the country for a third force.

The meeting at Safari Park inked a political pact in which Oka principals will collaborate with the Mount Kenya Unity Forum.

The forum is chaired by Narc Kenya leader Martha Karua and includes former Kiambu Governor William Kabogo and a host of former MPs.

Karua, Muturi and Kuria were not present. But Kabogo said the three were aware of the event.

Although details of the agreement have not been made public, the Star understands that the deal is the clearest indication yet that leaders want to work together in the 2022 polls.

"This is just a preliminary agreement that takes care of the cooperative and collaborative dimensions of Oka and Mount Kenya Unity Forum," a source aware of the deal said.

According to the source, who sought anonymity because of the sensitivity of the matter, the team will sign a bigger political coalition agreement early next year.

During stopovers along the Thika Superhighway, the leader vowed to work together as the country's third force.

Gideon said the two groups have a history of good leadership and Kenyans should trust them.

“We as OKA have joined hands with Mount Kenya Unity to liberate Kenyans from bad leadership. We are optimistic that people will vote for us,” the Baringo senator said.

Wetang'ula said once the OKA government is formed, they will address education and health problems.

Mudavadi said OKA is strong and looking for more Kenyans to get on board.

He downplayed divisions in OKA, saying they will work as a unit ahead of the 2022 general election.

“We are looking to have more Kenyans on board and we will reach out to everyone across the country," Mudavadi said.

"We are leaving no one behind. As One Kenya Alliance and Mt Kenya Unity Forum, we want an election that is verifiable, free and fair."

He urged the IEBC to prepare for the next general election to be free and fair.

"If I win, you should accept, and if you win, I will accept," Mudavadi said.

Kalonzo thanked the Mount Kenya Unity Forum for agreeing to work with them.

He said unity is paramount and anyone who plans violence should be stopped by all means.

He said they will use former President Mwai Kibaki's formula to revive the economy.

“I was the vice president during the Kibaki era. We worked together and built a strong economy and we will revisit the same. This country is bigger than everyone,” Kalonzo said.

“Don’t elect either Raila Odinga or William Ruto, they will mess this country like they did in 2007,” Kalonzo said.

“Mount Kenya unity forum will give direction ahead of the 2022 general election,” Kabogo said.

About two months ago, Mount Kenya Unity Forum officials, represented by Karua, Kabogo and Muturi, held a meeting with OKA in Karen.

Kabogo said the vote-rich region is yet to decide on the right presidential candidate for the 2022 elections.

Ruto: What is in store for Nyanza if I'm elected

We will field one presidential candidate, say Mt Kenya leaders

We will field one presidential candidate, say Mt Kenya leaders
Counties
1 year ago
Post a comment
WATCH: The latest videos from the Star
by AMOS NJAU and @Njaumburuh
News
19 December 2021 - 19:32
Read The E-Paper