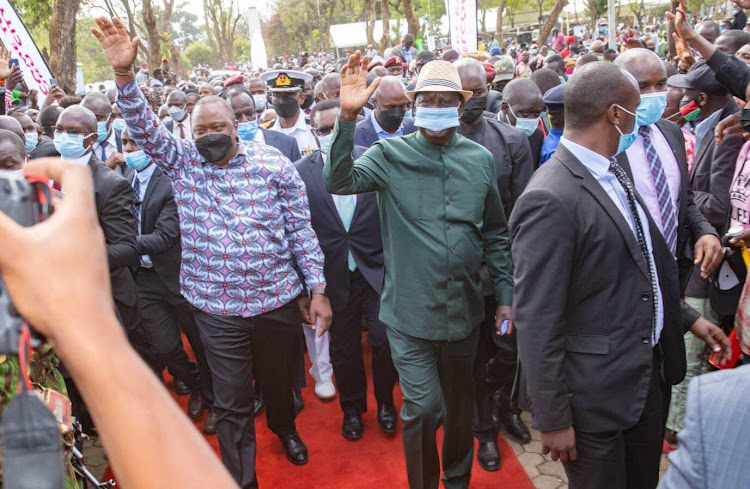 MPs are next week set to debate a bill that will clear the way for formation of coalitions ahead of the next election.

Approval of the Political Parties (Amendment) Bill, 2021 would be a big relief for President Uhuru Kenyatta and ODM boss Raila Odinga.

Next Tuesday would be a defining moment for the president and his handshake partner as MPs resume sittings to consider the proposed legislation.

The sittings, which will have two sessions each day, will be held on December 21 and 22.

MPs are racing against time to dispense pressing matters, including election-related laws, before reelection jitters jolt their operations.

The bill, which is sponsored by Majority leader Amos Kimunya, will be coming up for the second reading.

The Kimunya bill seeks to reintroduce coalition political parties, where constituent parties retain identity but form a coalition party as opposed to the current situation.

It provides that in case of a coalition political party, the coalition agreement must be submitted at least six months to an election.

According to the proposed law, the coalition party will be registered with the Office of the Registrar of Political Parties.

It also provides that a person may be expelled from a political party if he or she contravenes any provisions of the constitution of a political party, in this case prohibiting party hopping.

Presently, coalitions like CORD, NASA and Jubilee Alliance stood dissolved after constituent parties either dissolved or pulled out the legal instruments deposited at the Office of the Registrar of Political Parties.

The move is seen as part of the President Uhuru Kenyatta and ODM boss Raila Odinga’s plan to introduce a grand coalition for their handshake team ahead of the 2022 polls.

Supporters of the handshake believe the amendments will hasten the process of formalising the ODM-Jubilee coalition that is tipped to face forces that have opposed the Uhuru-Raila political marriage.

Jubilee and ODM are gearing up for a major political coalition tipped to shape the 2022 presidential race against Deputy President William Ruto.

The handshake team is also said to be working on a broader political game plan to bring on board more regional parties to the Azimio La Umoja Movement.

These parties include those that have openly declared their support for Raila’s 2022 presidential bid.

The president has on multiple times signalled that he would favour Raila as his heir to State House when he retires next year.

According to a notice circulated by the National Assembly clerk Micheal Sialai, the House will also consider a number of bills at various stages including the NHIF Bill.

The Senate, two weeks ago, scrapped the provision for mandatory membership of Kenyans above 18 years. The National Assembly will consider the amendments by the Senate.

At the same time, MPs will vote on the Proceeds of Crime and Anti-money Laundering Bill, 2021 that seeks to compel lawyers to disclose funds wired to their accounts on behalf of their clients.

The House will also consider some proposed bills before the Justice and And Legal Affairs Committee aimed at streamlining the 2022 election.

The Independent Electoral and Boundaries Commission has protested the slow pace, asking Parliament to speedily enact laws that will guide election transmission of presidential results.

“It is important that the relevant electoral actors continue to undertake robust engagements in order to champion for timely and comprehensive electoral reforms,” Ireri said.

How Raila's new political machine will battle with Ruto

The plan borrows heavily from the defunct National Rainbow Coalition of 2002 that ended Kanu’s 39 years rule.
News
1 month ago

Inside the roadmap for advancing gender equality in Kenya

Change will happen when every Kenyan realises these issues affect everyone, not just women and girls.
Health
1 month ago
by LAURA SHATUMA
News
16 December 2021 - 23:00