The project will be rolled out in Nairobi, Nakuru, Laikipia and Mombasa counties.

• First phase of the project will see 3,500 houses constructed at Roysambu.

•The President underlined the Government’s focus on improving the welfare of the military by providing decent housing. 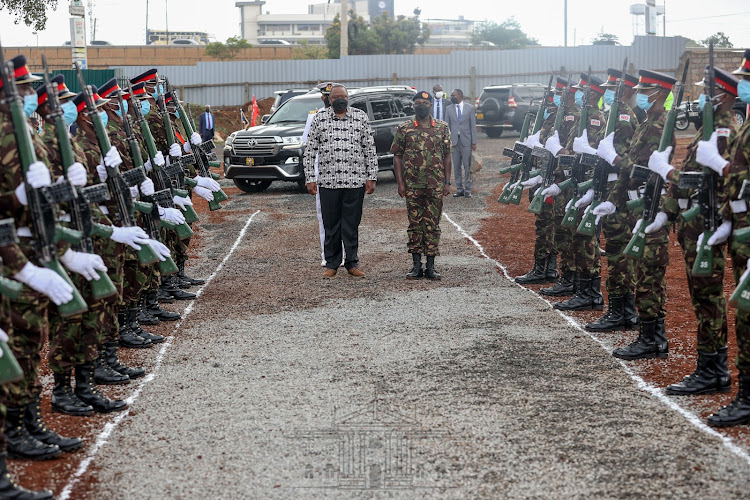 President Uhuru Kenyatta on Wednesday commissioned a mega Public-Private partnership housing project for the Kenya Defence Forces to be rolled out in Nairobi, Nakuru, Laikipia and Mombasa counties.

Speaking when he presided over the ground breaking ceremony for the first phase of the project that will see 3,500 houses constructed at Roysambu in Nairobi County, the President underlined the Government’s focus on improving the welfare of the military by providing decent housing.

“Today marks the first step in the journey of addressing the problem of shortage of houses for our officers in the military. For a long time we have been exploring ways of addressing the housing problem and we are happy that we have now found a solution through construction of the houses under public private partnership,” Uhuru said.

The houses to be developed on a build, lease and transfer (BLT) arrangement will be constructed on KDF land in Roysambu (Nairobi), Kwambuzi in Nanyuki (Laikipia), Nyali (Mombasa) and Gilgil (Nakuru).

The Head of State said he was confident that the housing project will be fast-tracked and completed on schedule and within budget, saying the project is part of the fulfilment of the affordable housing pillar of the Big 4 Agenda.

“I am confident that this project will be implemented according to the set down plan to ensure that within a short time all our officers and their families have decent accommodation,” he said.

Apart from housing, Uhuru said the Government is also constructing and upgrading military hospitals to serve KDF officers and their dependants across the country.

He cited the recent launch of the construction of a Level 4 hospital at Kahawa Garrison and the upgrading of the Kenya Defence Forces Memorial Hospital in Nairobi as some of the projects intended to boost the welfare and morale of KDF troops besides the provision of modern equipment to enable them execute their mandate effectively.

Speaking at the brief ceremony, Defence CS Eugene Wamalwa said he was pleased that his ministry will be contributing towards the realization of the affordable housing pillar of the Big 4 Agenda through the KDF housing project.

Chief of Defence Forces General Robert Kibochi thanked Uhuru for making the dream of providing decent housing to the soldiers a reality.

“I must, on behalf of the entire KDF, thank you Your Excellency for the support and guidance you have given us in terms of reaching this point where we are having to construct over 3,000 houses, in five regions of our country,” Kibochi said.

The CDF assured that within the next five years, the KDF will have developed adequate decent accommodation for all its soldiers.

Ex-soldiers to get free houses, medical services in proposed law

Our forces have contributed to global peace, Uhuru says

Uhuru noted that terrorists activities have reduced in the country, thanks to defence forces.
News
1 year ago
Post a comment
WATCH: The latest videos from the Star
by TRACY MUTINDA Lifestyle, Entertainment Writer
News
15 December 2021 - 12:44
Read The E-Paper