• With low levels of education, the report said, women and girls get trapped in a cycle of poverty because they are more likely to be unable to contribute financially to households.

• "They may also end up contributing too little, thus placing them at the mercy of their husbands or male members of their families," the report read. 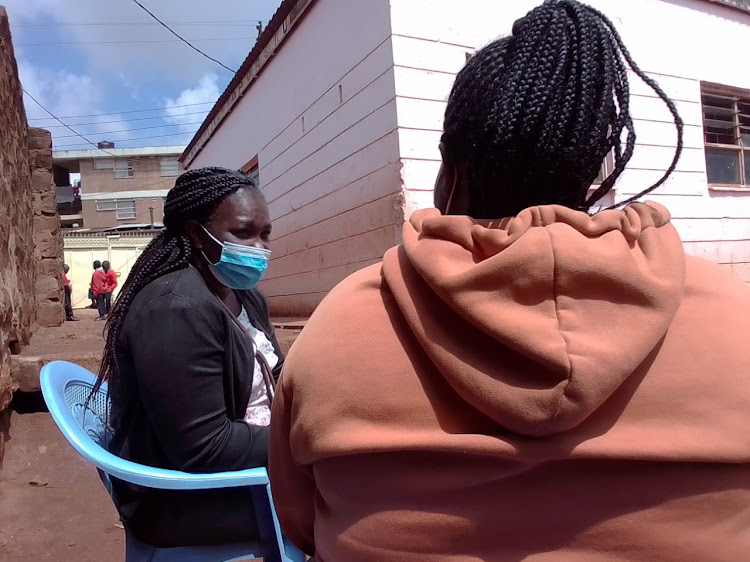 Jane, a victim of gender based violence, gets counselling from Nereah Odero, one of CREAW's counsellors at her Educational Center in Olympic, Kibera. Womnen from poorer backgrounds are more likely to experience intimate partner violence in their lifetime, according to the Global Poverty Index.
Image: SELINA TEYIE

When Mary (not her real name) was sexually assaulted in 2004 by a boy she knew, that was the beginning of many years of emotional suffering.

Mary, 14 at the time, had just had her first period and had no sanitary pads to help her protect her dignity at her vulnerable time of the month.

“My mother was a single mother and we lived in Kibra slums. Buying me pads was a luxury she could not afford because she had six mouths to feed,” she said.

Mary ended up asking her friend for Sh50 to buy the pad but he asked to be paid back in return.

“He asked me to pay him back the money but I told him that I didn’t have any. He ambushed me one evening when I was walking home from soccer practice and with his three friends, sexually assaulted me, " she said.

She was speaking during the launch of the POLICARE policy back in October, presided over by First Lady Margaret Kenyatta

Mary has always felt that if it were not for her socio-economic situation at that time, then she would never have had to go through that traumatic experience.

Globally, women and girls living in poverty are at a higher risk of experiencing intimate partner violence.

This is according to a report done by the United Nations Development Programme and the Oxford Poverty and Human Development Initiative, titled Global Multidimensional Poverty Index 2020.

The report was released on October 7 and explored the different dimensions of poverty globally.

With such low levels of education, the report said, women and girls get trapped in a cycle of poverty because they are more likely to be unable to contribute financially to households.

"They may also end up contributing too little, thus placing them at the mercy of their husbands or male members of their families," the report further read.

Consequentially, they become at risk of experiencing intimate partner violence or gender-based violence, as shown by the increase in cases reported during the pandemic.

“A sixth of all poor people worldwide (215 million) live in households in which at least one boy or man has completed six or more years in school but no woman has,” read the report.

During the launch of a report by the Center for Rights Education and Awareness (CREAW) on the experiences of women with IPV during the pandemic on December 1, it was reported that economic constraints during the pandemic were the major cause of violence on women.

The Government, together with women's rights organisations such as CREAW, disbursed funds to women living in poverty to help them start or support their small businesses.

Gender and Public Service CAS Jebii Kilimo lauded such efforts and urged more organisations to support the economic empowerment of women in order to help them escape the cycle of violence.

"Helping women get this support will give them courage to leave such violent situations in their lives without fear of having nothing to stand on once they leave abusive partners," she said.

Through the initiative, girls and boys reported numerous incidences of assault, among others.
News
6 months ago

Over 2,000 Kitui girls get free pads from well-wishers

Unesco says around half of all school-age girls do not have access to sanitary towels.
Counties
6 months ago
by SELINA TEYIE
News
15 December 2021 - 12:21