Officer injured in clash with gunmen at Laikipia

•Dozens of security officials have been killed and others injured in clashes with bandits over pasture.

•Multi-agency teams are on the ground to stabilise the area. 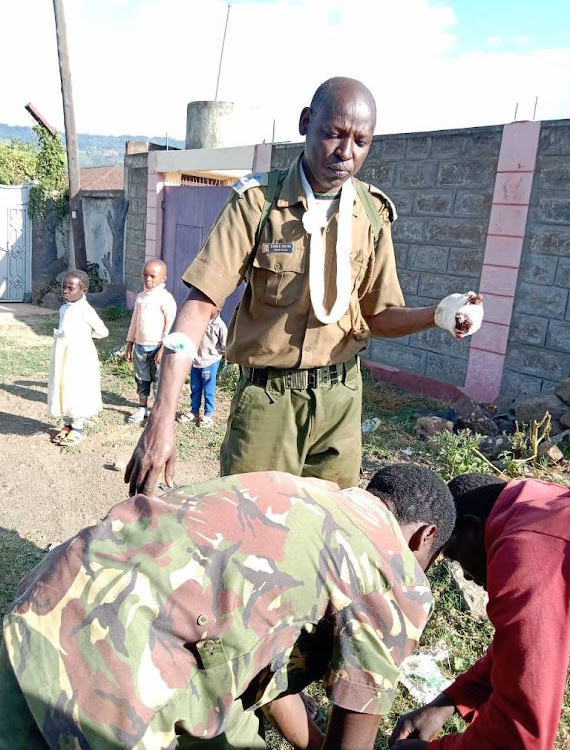 Inspector Ejore Emejen after he was injured in a shooting in Kirima, Laikipia County on December 14.
Image: HANDOUT

A police officer was Tuesday shot and injured in a clash with suspected bandits in Kirima, Laikipia.

Inspector Ejore Emejen was shot by gunmen who were driving away stolen animals.

The injured officer was taken to the Ol-Moran Health centre for first aid and later referred to Nakuru Referral Hospital.

The area has been troubled in the past months.

Dozens of security officials have been killed and others injured in clashes with bandits over pasture.

It is currently classified as a security zone.

Multi-agency teams are on the ground to stabilise the area.

To end water conflict among pastoralists in the region,  Engineers Brigade under a multiagency operation are finalizing two boreholes at Kirimon and Dam-Mawe.

The drilling started on November 27.

The two boreholes will have water pumped to overhead tanks from where it will be dispensed for residents to access clean water.

The multiagency operation in Laikipia started in September and is currently putting in place measures to alleviate recurrent water and pasture shortage that often lead to conflicts.

Reconciliation among communities led by the National Government Administration Officers is ongoing.

As part of efforts to restore order, Interior Cabinet Secretary Matiang’i announced the creation of a police division at Ol-Moran.

Ol-Moran was gazetted as the headquarter for Kirima subcounty.

He said two additional police stations will be established in the flashpoint zones.

Matiang'i said there will be additional National Police Reservists deployed in disturbed areas.

A training base for elite police units will be established to enhance police presence and serve as a buffer zone between Laikipia residents and invaders from neighbouring counties.

The CS said there will be the deployment of surveyors to Laikipia to expedite the titling process, review and recommend action on lapsed leases or those about to lapse.