Government has launched a campaign to ensure all Kenyans use clean cooking by 2028.

• Juma lauded KenGen for its global leadership in the field of renewable energy, as was demonstrated during the COP26 Conference that took place in Glasgow, Scotland.

• The CS said renewable energy is the preferred option for Kenya, adding that the move would also help attract foreign investments in Kenya’s energy sector. 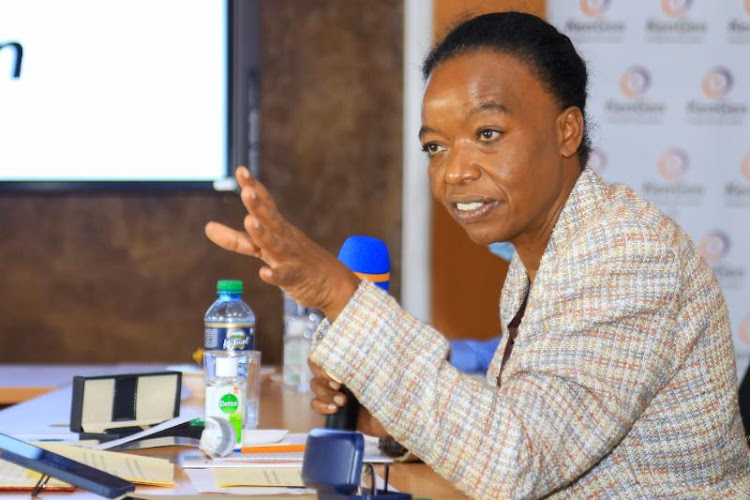 Kenya has committed to fast-track the deployment of renewable energy as a driver for economic development in the country.

This commitment was made by Energy Cabinet Secretary Monica Juma during her inaugural visit to Olkaria, Naivasha to inspect and assess KenGen’s geothermal power facilities.

The CS said renewable energy is the preferred option for Kenya, adding that the move would also help attract foreign investments in Kenya’s energy sector.

She was accompanied by the Principal Secretary, Gordon Kihalangwa.

Juma lauded KenGen, which was represented by Chairman, Samson Mwathethe and the CEO Rebecca Miano for its global leadership in the field of renewable energy, as was demonstrated during the COP26 Conference that took place in Glasgow, Scotland a month ago.

“My visit to Olkaria comes a month after the conclusion of the COP26 conference where Kenya was a global reference point in the field of renewable energy. It is always a befitting moment to witness the glowing recognition that Kenya continues to receive for promoting the generation of clean and renewable energy,” Juma said.

KenGen is East Africa’s largest electricity producer and among the top 10 leading geothermal energy producers in the world.

About 86 per cent of KenGen’s installed capacity of 1,818MW comes from renewable and clean energy sources, namely hydro, geothermal and wind.

Juma urged KenGen to ensure a reliable supply of power especially at this time going into the festive season underscoring the link between energy and dignity for humanity.

She said the Government has launched a campaign to ensure that all Kenyans use clean cooking by 2028.

Speaking in Olkaria, Miano expressed the energy KenGen’s commitment to delivering on its energy generation mandate to meet the country’s growing demand for electricity through renewable energy sources.

“KenGen is committed to ensuring a steady and reliable supply of competitively priced electric energy to support Kenya’s economy. The company is doing this by accelerating the deployment of renewable energy sources such as hydro, geothermal, wind and solar,” Miano said.

The KenGen CEO reiterated the company’s commitment to supporting the Government of Kenya’s ambition to achieve 100 per cent utilization of renewable energy by the year 2030 as a way of fighting climate change.

“We are at an advanced stage of construction of 83MW Olkaria I unit 6 and we expect this to be added to the grid between December this year and early next year,” Miano said.

She added, “This will further push our green energy portfolio and help drive down the cost of electricity in Kenya by displacing thermal energy.”

Mwathethe reiterated KenGen’s commitment to clean energy deployment and thanked the government and development partners for support in the delivery of power projects.

“The Board will continue to work with the Government and other stakeholders in the energy and development sectors to ensure we grow Kenya’s energy capacity because we know that this is how we can fast-track economic development in Kenya,” he said.

Juma’s visit comes a fortnight after new statistics recently indicated that the demand for electricity in Kenya hit a new record peak of 2,036MW, the highest ever recorded in the country’s history, marking a significant resurgence in demand since the onset of the COVID-19 pandemic in March 2020.

At the same time, the country recorded a new energy gross demand peak of 36,381MWh mostly drawn from renewable energy sources as the economy responds positively to the lifting of some of the COVID-19 related restrictions.

National energy generator, Kenya Electricity Generating Company (KenGen), contributed to the largest jump in renewable energy share with the company scaling up production in its geothermal, hydro and wind power stations to meet the growing demand.

We are not at war with IPPs, Kenya Power chair says

The government is re-negotiating contract terms with the independent producers.
Business
10 months ago
Post a comment
WATCH: The latest videos from the Star
by TRACY MUTINDA Lifestyle, Entertainment Writer
News
09 December 2021 - 18:47
Read The E-Paper