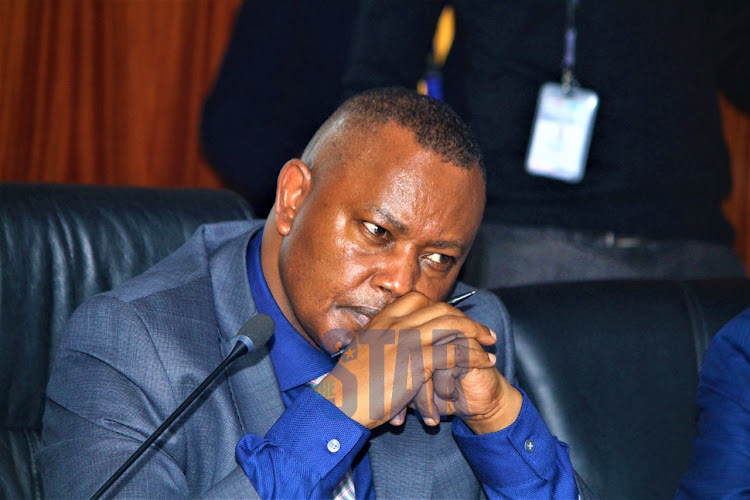 DCI boss George Kinoti is facing another jail sentence for failing to execute a court order that directed the arrest of Mombasa finance executive Maryam Abdillahi Mbaruk in December 2018.

The CEC had been sued by Mombasa-based car dealer Associated Automobiles Distributors Ltd for failing to pay Sh37 million for six vehicles sold to the defunct Mombasa County Council more than two decades ago.

Associated Automobiles Distributors Ltd told court that it sold and delivered the vehicles as per the Municipal council’s request and order in the 1998-99 financial year. It also delivered spare parts and rendered services.

In 2018, Justice David Majanja issued orders directing Mbaruk to pay the money. The court also directed her to attend sessions in person.

That order was ignored.

On December 19, 2018, Justice John Mativo ruled that Mbaruk was in contempt of court and directed she be arrested and committed to civil jail.

Inspector General of Police Hillary Mutyambai, Kinoti and Julius Titi who was the director of legal affairs at the National Police Service were directed to execute the orders.

The trio has been sued for contempt of court. The car dealer wants them sentenced to serve six months in prison.

In an affidavit filed on December 3, 2021 through Murage Juma and Company Advocates, the car dealer also wants Mbaruk and the three police chiefs ordered to pay a fine of not less than Sh500,000 each.

The case was filed under a certificate of urgency with the municipal county council of Mombasa, now the county government listed as the respondent.

Mbaruk, Mutyambai, Kinoti and Titi are all listed as first, second, third and fourth contemnors respectively.

High Court judge Anthony Ndung’u on Monday December 6, 2021 ordered that the matter be heard on February 2, 2022.

On November 18, 2021, Kinoti was sentenced to four months imprisonment for failing to obey a court order requiring him to release firearms belonging to businessman Jimi Wanjigi.

Justice Anthony Mrima directed him to surrender to prison authorities within seven days failure to which the Inspector General of Police should effect a warrant of arrest against him.

Kinoti is yet to report to jail. He sought to have the sentence set aside, saying Wanjigi’s guns were being held by the Firearm Licensing Board and not the DCI.

Wanjigi’s guns were seized during a raid at his home in 2017 and he has maintained that his firearms are in the custody of the DCI boss and not the Firearm Licensing Board.

"No evidence was tendered to show Kinoti transmitted the firearms to the board. Lack of that shows the firearms are still in his custody. This application is dismissed and orders I made on November 18 continue to be in force," Justice Mrima said on November 29 when he dismissed the DCI’s bid to quash the sentence.

In the current suit, lawyer Joseph Murage acting on behalf of Associated Automobiles Distributors Ltd says police have refused to arrest Mbaruk even after he informed them of her whereabouts.

He says he told Mutyambai that Mbaruk would be appearing before a Senate committee in July 2020 from where it would be easy to execute the arrest warrant.

Everything was verified and Parliament police station boss was ready to arrest Mbaruk. Julius Titi was aware of the plan and had even instructed the OCS to execute the arrest.

“I was called by the OCS at 4.30pm to be present when the arrested person is booked and to make any payment necessary for prison (being an arrest warrant for imprisonment due to contempt of court),” Murage says.

The lawyer said the action was unconscionable, illegal and a betrayal of Titi’s oath as an advocate of the High Court.

When he called Titi, the official confirmed having ordered Mbaruk’s release saying the matter was to be resolved in Mombasa.

Murage wants the court to be very stern with the accused persons, saying Mbaruk has developed a habit of ignoring court orders.

“It is very clear that the 1st contemnor (Mbaruk) has formed a habit of undermining the orders, authority and integrity of the court and the said actions are now being enabled by Mutyambai, Kinoti and Titi,” the affidavit reads.

Associated Automobiles Distributors Ltd director Bejul Gudka says Mbaruk continues to act freely and discharge her duties as the Mombasa Finance CEC, an office that is guarded by AP officers who are directly under the control and direction of the police bosses.

“In the interest of justice and consideration of the applicant who successfully obtained judgment more than a decade ago, this application deserves to be heard urgently and expeditiously,” Gudka says in his affidavit.

Court expected to rule whether his four-month jail sentence will be set aside.
News
11 months ago
Post a comment
WATCH: The latest videos from the Star
by PETER OBUYA
News
08 December 2021 - 18:41
Read The E-Paper