Police interrogated the man's father and a few residents before they picked the bodies.

• Nzioka's father Peter Kaloki said he realised that both his son and Gichuhi were dead at around 1pm on Tuesday.

• Their bodies lay at his son's two -roomed house located in Nzoweni village until 6.20pm, when police arrived to process the scene. 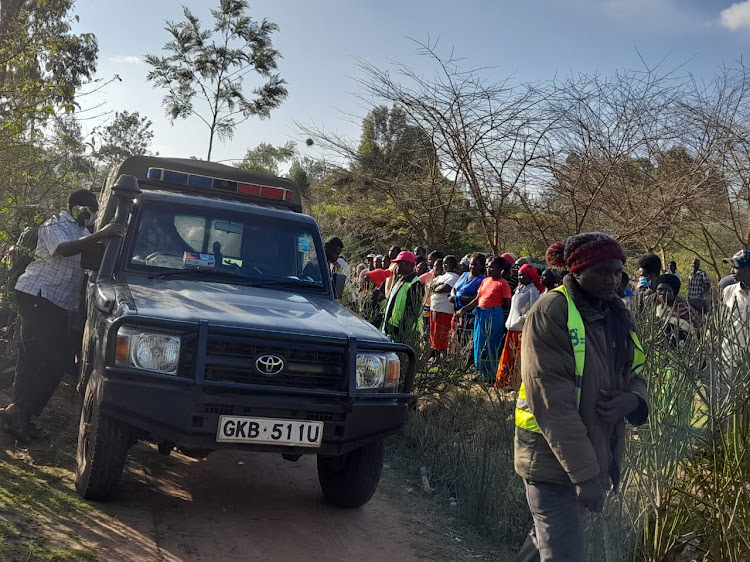 A man allegedly killed his wife before committing suicide in Mitaboni, Machakos county, on Tuesday.

Mwango Nzioka, 30, a boda boda operator, is suspected to have strangled Mercy Gichuhi, 25, a local bar attendant to death under unclear circumstances.

Nzioka's father Peter Kaloki said he realised that both his son and Gichuhi were dead at around 1pm on Tuesday.

Their bodies lay at his son's two -roomed house located in Nzoweni village until 6.20pm, when police arrived to process the scene.

Nzioka's body was hanging from the rafter while the woman's body lay on the bed with a cloth around the neck.

Police interrogated the man's father and a few residents before they picked the bodies.

Residents kept vigil from 1pm when the bodies were discovered, until they were removed from the house.

Kaloki, a watchman at Mitaboni shopping center, said he was informed of his son's death by his wife.

He said they were aware that their son was dating Gachuhi, though they didn't know much about her.

"My son is a boda boda operator. I don't know the woman well but my son went to visit her parents in Nakuru county where she hails from some time last year when I was sick," Kaloki told reporters outside his son's house.

He said the two lived alone in the semi-permanent house located in its own compound barely 800 meters from his home. They didn't have children together.

The couple, according to Kaloki and neighbours, got to the house from Mitaboni shopping center on Monday night but were never seen again.

The woman's failure to report to work on Tuesday morning prompted two of her colleagues to visit the home to find out about her whereabouts and get the keys to the club.

"I today left my work place where I serve as a night guard at 5am. I returned home and went to bed. I woke up at 1pm and took tea before my wife came calling from the garden where she was weeding. She told me Mwango had died. We came to Mwango's home where we met two strangers, one said she works with the dead woman," Kaloki said.

Kaloki said the door of his last born child was open when they entered the house.

"We were shocked to see my son's body dangling from the roof while the woman's body was lying on the bed," he said.

The CS urged the public to refrain from insensitive trivialising and politicising of the matter.
News
1 month ago

The residents barricaded the Kangemi area as some lit bonfires on the roads.
News
1 month ago
by GEORGE OWITI
News
07 December 2021 - 18:12