• The CS was reacting to an incident in which a police constable shot dead six people before committing suicide.

• Constable Benson Imbatu was about to retire from service. 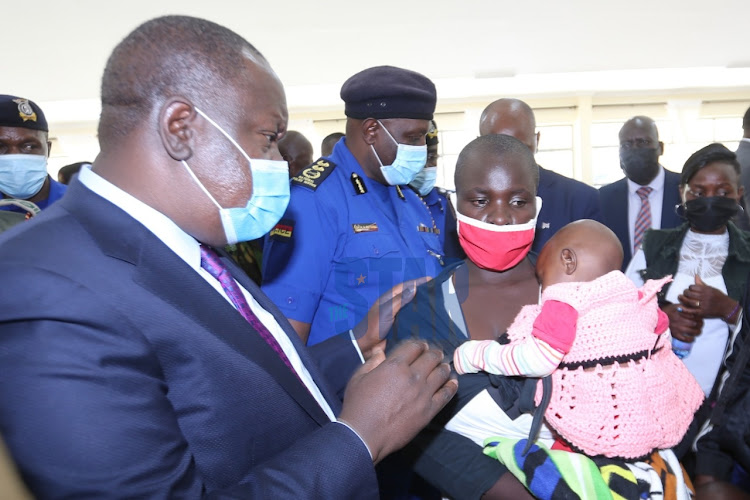 Preliminary investigations into the killing of six people in Kabete, Nairobi, by a policeman suggest the incident may have been triggered by a love triangle gone awry.

Interior CS Fred Matiang'i, however, said the DCI and Internal Affairs Unit of the National Police Service are undertaking an active investigation on the matter and will keep the public fully updated.

“We are saddened by the shooting and we condole with the families of those affected. As the probe goes on, we understand for now it is linked to a love triangle,” he said.

He encouraged police officers to formalise their unions and to make information on the same officially available to the human resources department.

The dead included neighbours and bodaboda riders who had rushed to his house.
News
5 months ago

He said the clergy will be roped in to encourage as many officers as possible to conduct formal weddings.

“This will reduce/discourage delays in payment of fallen officers' dues over disputed relations and court cases on succession,” he said.

The CS was reacting to an incident in which a police constable shot dead six people before committing suicide.

Constable Benson Imbatu was about to retire from service.

The CS urged the public to refrain from insensitive trivialising and politicising of the matter, especially on social media.

“Like any other members of society, police and prisons officers are susceptible to mental health challenges and other pressures, including drugs and substance abuse,” he said.

He spoke at the APTC Embakasi during a commemoration service for police and prison officers who have fallen in the line of duty.

Matiang’i said the government in collaboration with the NPS and prisons service has enhanced counseling and medical help for affected officers.

“There is a deliberate drive to destigmatise mental health problems and stress and to actively reach out to potential cases, including Nyumba Kumi initiative.”

He said the NPS and the Prisons Service will digitise officers' records to ensure accurate and available data to help with payment of relevant dues for fallen officers.

Further, payment of gratuity and other benefits for fallen officers will be expedited.