How new app is changing wildlife protection and conservation

It shows how fast or slow they are moving and where they travel by day and night.

•Each animal is fitted with a tracking collar that contains a GPS coordinate.

•The app pinpoints the location of the animal and assigns each individual a different coloured track, highlighting that individual’s choices in the landscape. 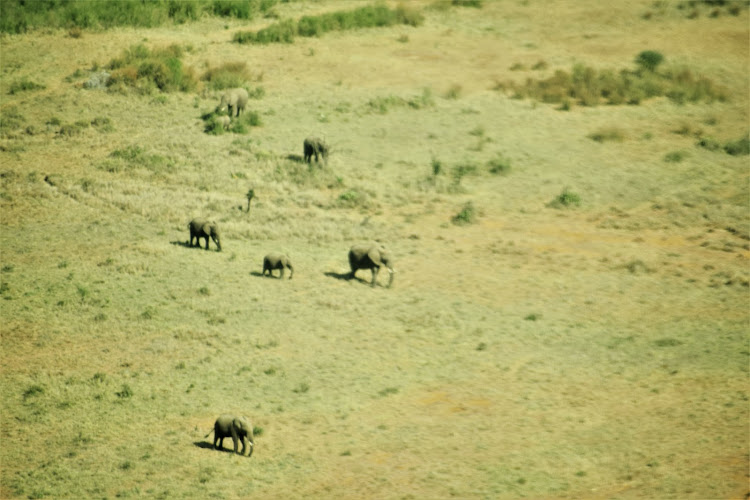 A herd of elephants around a water point in Ol Jogi wildlife conservancy in Laikipia County on July 5, 2021. Photo/MARGARET WANJIRU

Save the Elephants, a conservation NGO, has developed an app that is changing the way researchers and conservationists protect wildlife.

“Through the app, those authorised can see the movement of elephants, rangers and vehicles. It is used in 150 sites across Africa,” he said.

Pope said the app is useful for researchers and wildlife managers for different kinds of species such as zebra, lions, oryx, elephants among others.

He said the app captures and presents very clear information about any species, helping to learn behaviour.

“Wildlife is individuals and you can make mistakes if you generalise,” he said.

Pope said several crop raids have in the recent past been prevented by the use of the app.

He said the app has helped define wildlife corridors.

“It is really important for the future of Kenya and nature. Climate change is coming and can change everything,” he said.

Pope said climate change is set to affect soil for growing crops and water for drinking.

Drawing data from EarthRanger, a real-time software solution, STE WildTracks allows users to see elephants, rhinos or any other tracked animal through the system.

The app shows how fast or slow they are moving and where they travel by day and night.

The app (formerly known as the STE Tracking App), was built on decades of tracking wild African elephants and is changing the way researchers and conservationists protect these animals.

As a compact portable device, the WildTracks can be used to track wildlife in the field, from the air, by car and on foot.

The movements are displayed to highlight not just where the animals go, but also the speed at which they are moving, and where they travel day and night.

By displaying animals in individual colours, the app encourages investigation into what is driving the individual decisions of each elephant.

As researchers and conservationists learn more about the movement of these animals. The app has helped Save the Elephants identify and protect important wildlife passageways in Kenya, react swiftly to elephants in trouble from poaching or human-elephant conflict, and gain a bird’s eye view of how humans are impacting elephant movements.

With sophisticated data caching and refreshing, data can either be downloaded at headquarters and accessed during the search, or refreshed in the field if a connection is available.

The combination of on-the-fly research and management tool and tracking platform has proved popular beyond elephants, and currently six other species visualise their data using the app.

By rebranding as STE WildTracks, and releasing it with several new features, Save the Elephants aims to encourage wider use of its features with other species.

Save the Elephants has been tracking elephants for more than 25 years and remains fully engaged in this field.

STE’s founder Dr Iain Douglas-Hamilton pioneered the use of radio collars on elephants in 1969, and is widely credited with developing metrics and methods that stemmed the tide of elephant poaching for ivory in Africa.

Today, STE facilitates the tracking of over 450 elephants across the continent flowing through its tracking systems.

STE WildTracks is used by 33 partners across Africa to track seven other endangered wildlife species, including lions and Grevy’s zebra in Kenya and Scimitar-horned oryx in Chad.

It is also used in Myanmar to track Asian elephants.

Each animal is fitted with a tracking collar that contains a GPS coordinate.

The app pinpoints the location of the animal and assigns each individual a different coloured track, highlighting that individual’s choices in the landscape.

The app is optimised for use in the field and from the air, allowing users to find these particular animals and investigate their recent behaviour on the fly.

Born of collaboration between Save the Elephants and Vulcan Inc., STE started working with the company in 2015 to improve its tracking systems.

This led to the creation of EarthRanger - a sophisticated tech platform to monitor protected wildlife areas by drawing in real-time data from cameras, animal collars, radios, aircrafts and vehicle sensors.

EarthRanger, now a product of the Allen Institute for Artificial Intelligence, has been adopted in more than 180 protected areas across nearly 50 countries to help not only elephants but all wildlife and the local communities that benefit from them.

Over the years, STE has followed some extraordinary elephant journeys through the tracking app.

In particular, lone bull elephants trekked for miles over open and dangerous landscape, either following the paths of their ancestors or even forging new routes.

An elephant called Morgan who marched to Somalia and back in 2016; the famous Kenyan elder, Matt, who roamed the longest distance of any elephant in Kenya; and the legendary Mountain Bull from the slopes of Mt Kenya have been tracked by the use of the app.

The app was also used to track Tim, the iconic tomato-loving tusker from Amboseli, whose tracking data provided intimate insight into his crop-raiding behaviour and enabled conservation partners to improve rangers' patrol strategies so that villagers can live more harmoniously with elephants.

Its beauty has been eroded by several projects that have been put up inside
Counties
6 months ago
by GILBERT KOECH News Reporter
News
07 December 2021 - 07:19