• He said such tribal groupings were a threat to the country's unity as they promote division and hatred among Kenyans. 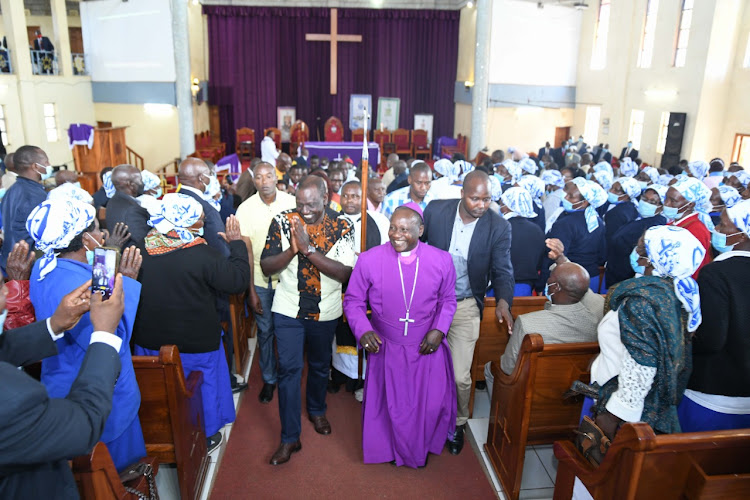 DP William Ruto when he met with the leadership of the Anglican Church of Kenya (A.C.K), Nyeri Diocese, at St. Peters Cathedral Church in Nyeri town led by Bishop of Mount Kenya West — The Rt Rev Joseph Kagunda.
Image: DPPS

Deputy President William Ruto has asked his competitors to stop using the criminal justice system to advance their political agenda.

Ruto told them to come up with an agenda and sell to Kenyans who have the final say on issues of elections.

"I want to encourage our competitors to stop using the criminal justice system to intimidate our supporters. Look for a plan and sell it to the people who have final say on elections,"  Ruto said.

Speaking in Nyeri county on Monday during empowerment programmes, Ruto assured Kenyans that if he takes over the leadership of the country, the criminal justice system will not be used to fight political wars.

"Under our administration, the criminal justice system will be used to fight crime and corruption but not to fight political opponents,"  Ruto said.

They term it regrettable that the 'small fish are being punished after the incident.
News
8 months ago

At the same time, Ruto has asked Kenyans to reject leaders advocating for tribal political parties.

He said such tribal groupings were a threat to the country's unity as they promote division and hatred among Kenyans.

The Deputy President said the country was better off united with its leaders working together to address challenges facing ordinary citizens.

"Do not accept to be divided into village political parties. Let's instead unite and work together. We will overcome our challenges collectively," Ruto said.

He appealed to Kenyans to join the Hustler movement that seeks to unite the country with the aim of addressing the country's economic challenges.

"Let us all rally behind UDA. This is a party with a national outlook that will unite the country," he said.

Ruto's sentiments were echoed by leaders from Mt Kenya who urged residents and their leaders to disassociate themselves from small tribal parties and embrace UDA.