The choir continued rehearsing the songs they were to sing at the wedding ceremony as they waited.

• At least 31 people were killed on Saturday after the bus plunged into the river.

• Mwingi Central MP Gideon Mulyungi had in 2018 said he was sourcing for funds to construct the bridge, a promise Governor Charity Ngilu made on Sunday. 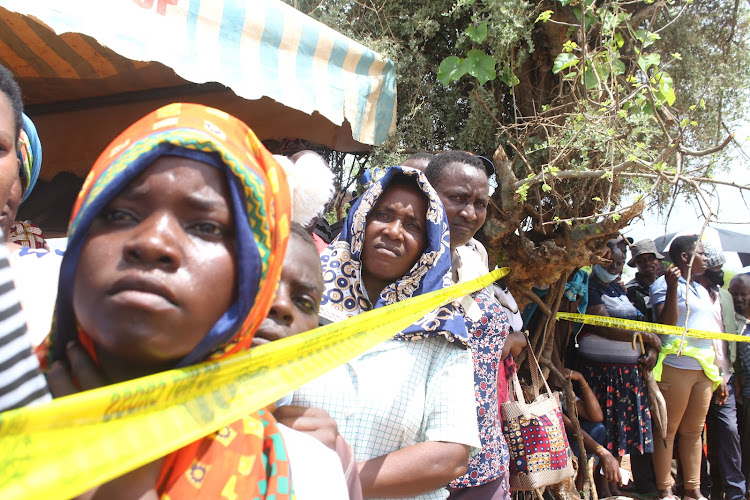 Residents try to get a glimpse of rescue operations at the scene where a bus plunged into a River Enziu, killing more than 30, in Mwingi, Kitui county, on December 5, 2021
Image: ANDREW KASUKU

Barred by a police yellow tape cordon, curious residents of Mwingi stretch their necks to catch a glimpse of the retrieval of the ill-fated bus from River Enziu.

At least 31 people were killed on Saturday after the bus plunged into the river.

Mothers sat on mud as they breastfed their children as hundreds ignored the scorching sun and random showers to witness the retrieval.

The nearby Nguni market centre remained almost empty as residents trooped to the river bank in their numbers. Business was booming for boda boda riders who ferried people from Mwingi, a 25-minute-drive away, to the scene.

On Saturday, a seasonal river swept away a bus that was ferrying church members to a wedding ceremony.

Before the tragedy, the passengers, mostly choir members and relatives of the couple, had camped for three hours on the river bank, waiting for the water to subside.

Survivor Joyous Mutua, 24, said the choir continued rehearsing the songs they were to sing at the ceremony as they waited. 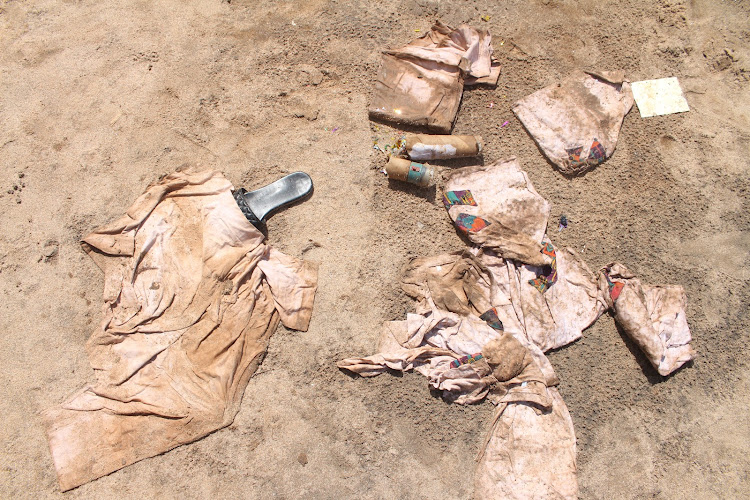 A shoes and clothes belonging to passengers in the bus that was swept away by floodwaters at River Enziu, Mwingi, on December 5, 2021
Image: /ANDREW KASUKU

After the water appeared to have gone down, four vehicles crossed successfully. The bus followed suit but did not make it to the other side of the river.

“We hardly finished praying when the driver started moving the bus. It moved a few metres before it hit a depression. It slid into the river and started sinking," Mutua told the Star at Mwingi Level 4 Hospital mortuary.

In about 30 seconds, the 61-seater bus belonging to St Joseph Seminary, Mwingi was almost fully submerged.

Mutua and his cousins, who were occupying the back seat, smashed the rear windscreen.

He said he grabbed his four-year-old sister and swam to safety. He also saved another passenger.

It was his grandfather's wedding.

“My grandfather had a recent near-death experience so when he recovered he promised to go back to church, so we had to celebrate,” he said. 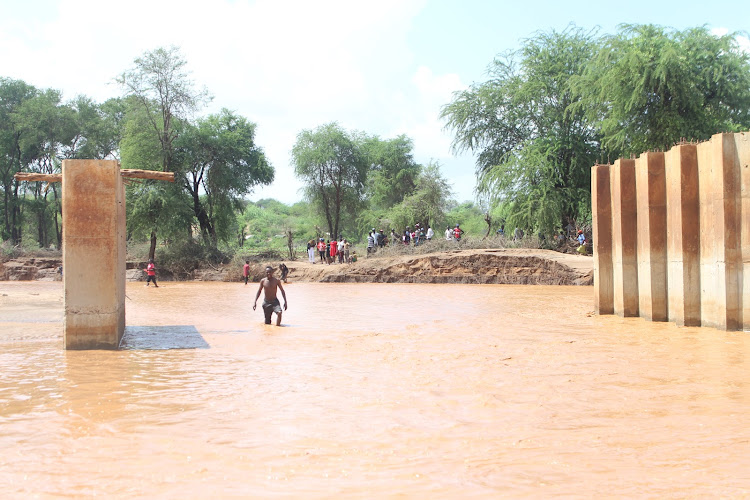 Pillars of an unfinished bridged at River Enziu, where a bus plunged into the river killing more than 30 people on December 5, 2021
Image: ANDREW KASUKU

On Sunday at 3pm the first NYS crane arrived.

A second crane was brought in after the first failed to lift the bus out of the water. It was stuck in the mud.

An excavator moved in to help shake the wreckage as the cranes attempted to lift. It worked.

Seeing the wreckage signalled hope to families and villagers who were waiting for the bodies of their loved ones to be retrieved.

Survivors said the bus had passengers from Kitui, Nairobi and others from nearby Nguni who had hitched a ride in the bus to cross the river.

As the bus was lifted out of the water, divers retrieved two bodies. A man and a woman were found near the front side of the bus.

A-month-old child and the mother's bodies were also recovered.

Three other bodies were found after it was removed from the water.

The body of a woman was still on the seat with hand sticking out of the window.

A team of police and KDF officers had a hard time preventing the crowd from taking photos and videos of the bodies.

Residents asked why it took so long to have cranes and other equipment brought in to retrieve the wreckage and the bodies. 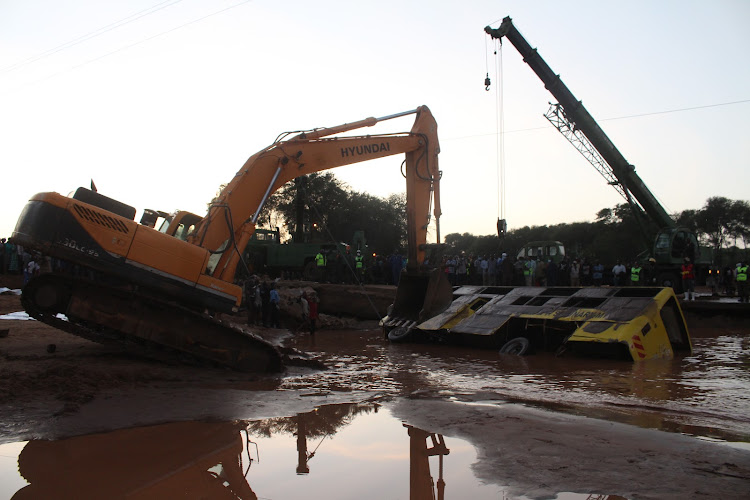 Cranes and an excavator pull the ill-fated bus out of River Enziu, Mwingi on December 5, 2021
Image: ANDREW KASUKU

Witnesses say the lorry tried to pull the bus out, but the rope snapped and the bus sunk deeper into the water.

Eastern regional commander Ronald Opili said the exact number of passengers on the bus is not clear, but official records show there were only 10 survivors. 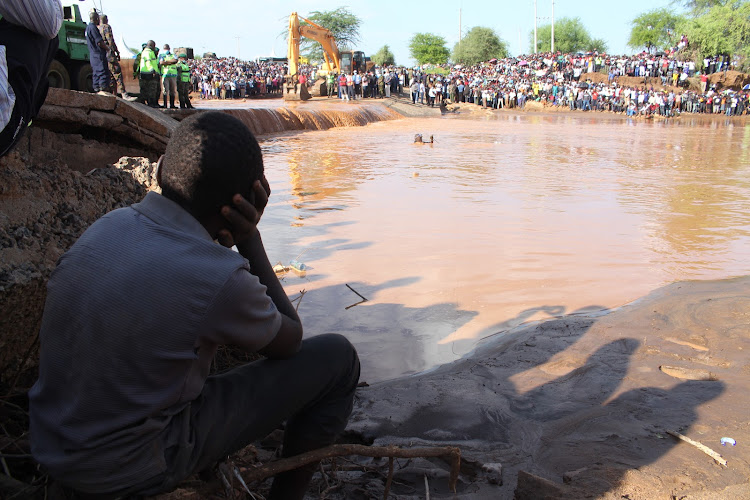 Villagers at the scene where a bus plunged into River Enziu, killing more than 30 people, Mwingi on December 5, 2021
Image: ANDREW KASUKU

In March 2018, a charcoal lorry that was carrying five passengers was swept by the river at the same point.

In May the same year, a Probox car with passengers heading to a burial was swept by raging waters as it attempted to cross.

At the time, Mwingi Central MP Gideon Mulyungi said he was sourcing for funds to construct the bridge, a promise Governor Charity Ngilu made on Sunday.

Mulyungi accompanied Ngilu, Wiper leader Kalonzo Musyoka and other leaders who turned at the scene on Sunday.

“...we want to say sorry for the lives lost in this tragedy. We didn’t expect something like that to happen but the preparedness that there was since we knew about it and looking at the depth of the river I can only say the teams have worked as hard as possible,” Ngilu said.

Agencies involved in the rescue include the Red Cross, Kitui county staff, KDF, NYS, the police and local youth volunteers. 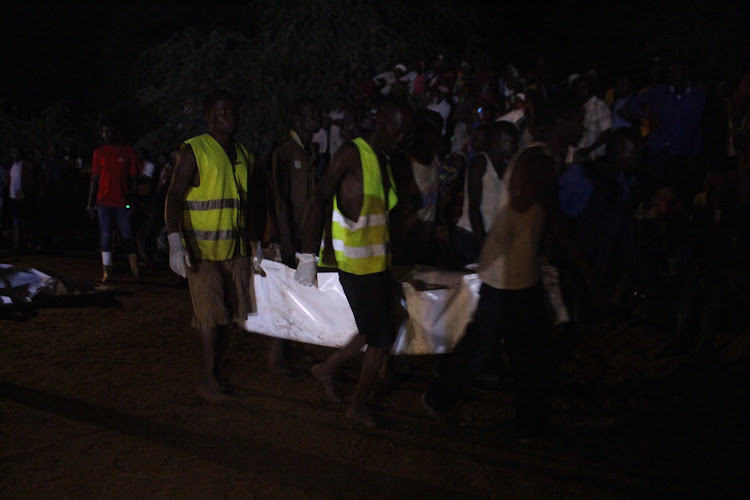