Ruto has remained critical of the BBI, saying it was a plot by a few political elite to create powerful positions for themselves 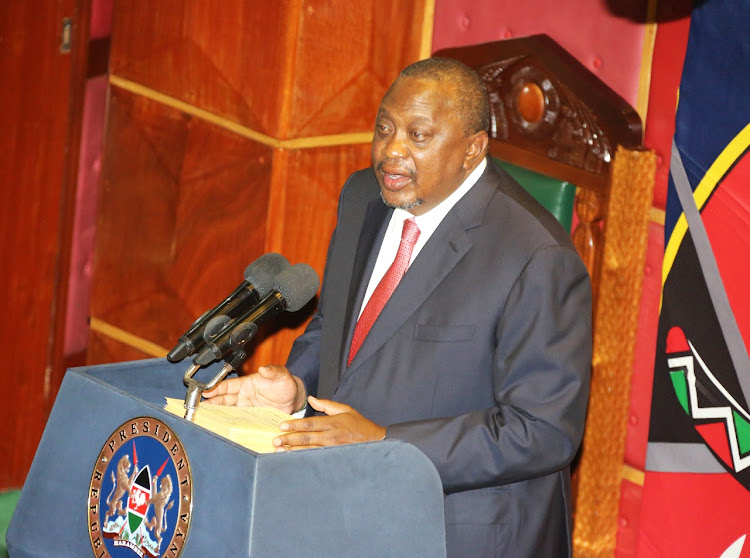 President Uhuru Kenyatta on Tuesday hinted at the revival of the BBI, even as he bashed the Judiciary for slamming brakes on the initiative he said would have ensured political stability.

Uhuru said the country lost immensely in the botched constitutional amendment bid, but reiterated the country’s ‘political stabilisation shall happen.’

“The need for political stabilisation is the most urgent task facing Kenya today,” the President said during State of the Nation Address to Parliament.

“… and it is the foundation upon which our greater justice, fairness, health, wealth, and security will be built on. For that reason, it shall happen,” Uhuru added.

The President took a swipe at the Judiciary and also appeared to target the opponents of the drive led by Deputy President William Ruto in his two-hour speech.

Ruto was and has remained critical of the BBI, saying it was a plot by a few political elite to create powerful positions for themselves at the expense of ordinary Kenyans.

Tellingly, throughout his address, the President did not mention his deputy, signaling the escalating bad blood between them.

He said Raila, alongside ANC leader Musalia Mudavadi welcomed him Parliament when he first stepped to Parliament as nominated MP.

“It is always a privilege to be here. I was here as nominated MP and later as Cabinet minister. In 2002, I came back as Leader of Official Opposition and Gatundu South MP,” he said

Uhuru said the BBI was well intended to address political toxicity and violence that have hit the country’s economy every election cycle.

The President said the proposed law changes contained massive benefits but the same was thwarted by "a few individuals [who] sat down in a dark room and decided otherwise".

“We cannot behave like the proverbial ostrich and bury our heads in the sand. A constitutional moment does not resolve itself, simply by being, ignored,” he said.

The High Court and the Court of Appeal ruled against the Constitution of Kenya (Amendment) Bill, 2020 driven through the Building bridges Initiative.

The courts dismissed the drive as illegal, unconstitutional, null and void.

BBI was a result of the handshake between the President and Raila after the contested 2017 presidential election.

In his address, Uhuru listed what he termed as losses in the botched initiative that sought to amend several articles of the Constitution.

He said the country lost equity in resource allocation to the counties.

“In missing the First Amendment to the 2010 Constitution, Kenyans missed an increase to the minimum county allocations from the current 15 per cent to 35 per cent,” he said.

“But to anchor this goodwill in the Constitution so that devolution is embedded, we wanted a constitutional amendment that was clear and certain. This did not happen,” he said.

“Had this amendment been adopted, counties would have received Sh562 billion instead of the Sh316.5 billion allocated to them in the 2020-21 Budget, an increase of over 75 per cent,” he added.

Uhuru added that the country lost an opportunity to realise proportional gender representation in Parliament.

The BBI would have ensured that 50 per cent of all senators are women, he said. The Bill had proposed election of two senators - male and female – in each of the 47 counties.

“And the logic here was to ensure that if we percolate the proposed 35 per cent of our national revenue to counties, women should be at the centre of decision-making on how this revenue is utilized. But this did not happen,” he said.

The country also lost an opportunity to expand the Executive to accommodate a broader face of Kenya and expand representation, he said.

The BBI Bill recommended the creation of office of the Prime Minister and two deputies in what the proponents said would have ensured fair representation in the Executive.

“This would have constitutionalized the end of the winner-takes-all outcome of elections that creates so much toxicity and tension. This did not happen,” he said.

While emphasizing the need for political stability, Uhuru demonstrated how political instability has affected the country’s economy every election cycle.

“While undoubtedly multi-party politics has been a better democratic platform than the single-party state, we must not ignore the very real negative aspects of our politics and electioneering,” he said.

In 1992, he said the election cost the country Sh248 billion in lost economic growth. Lives were lost and populations displaced.

In 2007, the election eroded the equivalent of Sh250 billion in lost economic growth in a matter of days.

“Lives were lost and populations displaced, just as had been the case to a far lesser extent in 1997,” he said.

“And the question I pose to the leadership of this country present here today is this: Is this right? Is this trajectory the logical path that our country should take?” he posed.