• In Nairobi county, a law has been proposed spelling jail terms of between six months and a year, or fines of between Sh10,000 and Sh500,000 for sex workers. 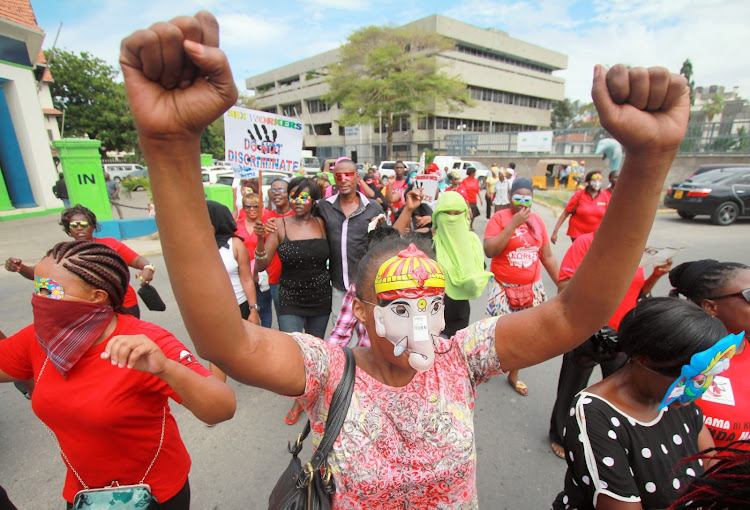 They will operate without fear of arrest should MPs approve a bill decriminalising the felony.

The proposed law seeks to delete a section of the law that gives police powers to arrest any person who in their judgement is idle and disorderly.

Nakuru Town East MP David Gikaria in the Penal Code (Amendment) Bill, 2021, that is due for the first reading, says police have used the provisions to harass innocent Kenyans.

He has proposed an amendment to Section 182 of the Penal Code which lists those engaging in commercial sex work in public places, beggars, and drunkards causing a breach of peace as idle and disorderly.

“The Penal Code is amended by repealing section 182. The law enforcers have often used section 182 to harass innocent members of the public,” Gikaria says in the bill’s justification.

Also, of concern is that such persons are barely presented in court after arrest as many are freed after parting with bribes of between Sh200 and Sh2,000.

The Penal Code says idle and disorderly persons include “every common prostitute behaving in a disorderly or indecent manner in any public place.”

It also provides that it is an offence for any person to cause, procure or encourage any person to beg or gather alms in public spaces as well as streets.

The current law further provides that the police can arrest every person who publicly conducts himself in a manner likely to cause a breach of the peace.

Any person who without lawful excuse publicly does any indecent act is also at the mercy of the police who have powers to arrest and lock up such persons.

Sex buyers are equally not spared the current law which prescribes as an offence for a person to solicit for immoral purposes.

“…shall be deemed idle and disorderly persons, and are guilty of a misdemeanour and are liable for the first offence to imprisonment for one month or to a fine not exceeding one hundred shillings,” the law Gikaria seeks to delete reads.

As a deterrent, a person convicted of the crimes may as well pay the fine and be taken to jail, or be imprisoned for one year for repeat offences.

Law provides that it is a felony to live on earnings of prostitution, solicit for immoral purposes in public places, manage a brothel, be found in  one, or use your house or any part for prostitution.

There is a clash of opinion between human rights defenders and a section of members of the public in regards to dealing with sex workers.

The bill’s introduction has coincided with the ongoing 16 Days of Activism against Gender-Based Violence under the theme of "Orange the World: End Violence against Women Now!"

The National Gender and Equality Commission in a 2016 report classified persons arrested for suspected prostitution as victims of GBV.

“Police and prison officers said survivors who, though held for non-GBV crimes, met the criteria for being survivors of GBV. These include women who had been jailed for engaging in the sale of illicit brews and prostitution,” the report reads.

In August, Nairobi Metropolitan Services and the police mounted an operation in which 100 sex workers were rounded up for being a nuisance.

Traders operating in downtown Nairobi complained that the sex workers were operating in broad daylight around their shops – distracting would-be customers.

Street families, parking boys and muggers were equally rounded up in the sting operation that is now conducted randomly.

In Nairobi county, a law has been proposed spelling jail terms of between six months and a year, or fines of between Sh10,000 and Sh500,000 for sex workers.

The Nairobi County Nuisance Act 2020 is due to be signed into law by Governor Anne Kananu.

Post a comment
WATCH: The latest videos from the Star
by MOSES ODHIAMBO Journalist and Political Writer
News
02 December 2021 - 05:55
Read The E-Paper