The three appeared before Chief Magistrate Diana Mochache on Monday.

•Musharraf Abdalla Akhulunga alia Zarkarawi, Mohammed Ali Abikar and Joseph Juma Odhiambo alia Yusuf who were also in the company of a fourth accused pleaded guilty to scaping from lawful custody for the three accused.

•The fourth accused, Abdulmajid Yassin was charged with aiding the escape of the other three prisoners  from Kamiti Maximum. 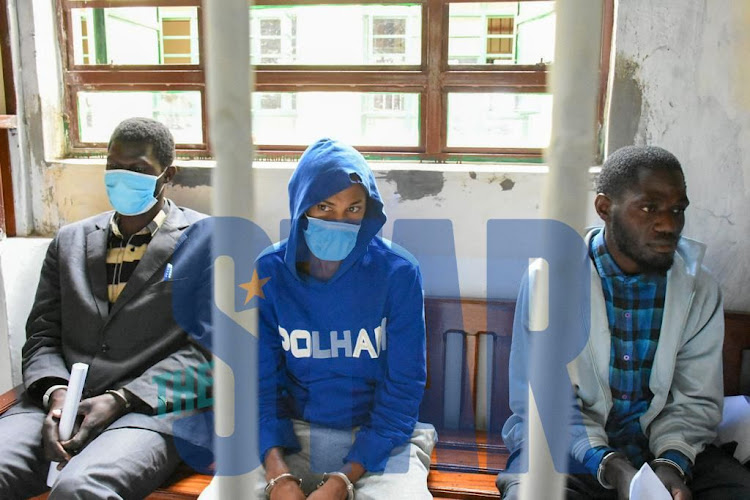 Appearing before Chief Magistrate Diana Mochache at the Kahawa Law Courts, the three; Musharraf Abdalla Akhulunga alia Zarkarawi, Mohammed Ali Abikar and Joseph Juma Odhiambo alia Yusuf who were also in the company of a fourth accused pleaded guilty to scaping from lawful custody for the three accused.

They however, denied another count where they were accused of committing a terrorist act by escaping from the prison, which was a threat to national security.

The fourth accused, Abdulmajid Yassin was charged with aiding the escape of the other three prisoners  from Kamiti Maximum.

He denied the charge.

The three are accused of escaping from Kamiti  maximum prison on November 14, 2021.

The court heard that the three escaped through a drill hole in cell number six which was made with the aid of metal bar and nails.

They used a piece of mattress to cover the hole.

They also made a makeshift contraption by cutting the blanket into pieces using a razor blade, tied it together and used it to climb the wall.

Junior officers under pressure to deliver cash to bosses every weekend.
News
1 month ago

The prosecution provided a chisel, two razor blades, and two nails as part of evidence of what they used to make their way out of the prison.

One of the convicts Musharaf Abdalla said the prosecution had demonstrated how they escaped from Kamiti maximum prison.

He also noted that he had not seen some of the items they used including a tindo, a pair of scissors and an extra metal hook; two rims of plain paper they used to cover the wall, as well as bar soap.

While addressing the court, Abdalla said if he got the chance; he’d escape prison again since it only attracts  two years to his 30 years sentence.

“I don’t want to leave prison because the ATPU will kidnap and kill me,” he said.

Abdalla said that they are scared of going back to Kamiti prison because there are other wardens who aided their escape that have not been charged.

He was convicted in 2017 to serve 22 years for being in possession of firearms. He wanted to attack Parliament and was charged under the explosives act.

The second accused was convicted in July 2019 for conspiracy to commit a terrorist act as well as committing other terrorist offenses; one in 2015 at Garissa University where 148 were killed.

He was sentenced to 41 years in jail.

The third accused was on September 2020 sentenced to 15 years in jail for travelling to a terrorist designated country, Somali.

On Monday, Chief Magistrate Mochache sentenced the three to 15 months in prison.

Mochache noted that they are likely to face hostility at Kamiti prison and advised that they be held at a prison the level of Kamiti at the discretion of the Commander of prisons.

Abdalla will also record a statement at the ATPU on the officers who aided their escape from Kamiti.

Six Kamiti warders to remain in custody till Monday

They are suspected to have aided three terror convicts escape prison.
News
1 month ago